‘What’s going on?? Who is this guy?’ I thought to myself as I looked at the 7 foot tall man standing before me. He slowly made his way towards me, getting closer and closer. “What do you want!!” I asked hoping for a reply.Bookmark here

“I came to do one job, and that was to kill you Boy.” The figure replied with a cold, deep voice. Bookmark here

‘Why does his voice sound soo… familiar?’ he instantly appeared in front of me. Grabbing me by the neck with one hand, he lifted me off the ground, and began squeezing the air out of me. Bookmark here

Everything was going black, I was losing consciousness. I… was… dying. My heart was racing, then slowly began to stop. I felt the blood in my head rushing out of my nose and mouth. The pain of death was taking its toll. I tried everything to release his grip but, he was obviously too strong for me…Bookmark here

“Don’t worry, it will all be over soon.” The masked man said Bookmark here

‘I don’t want to die’ I thought as tears streamed down my cheeks.Bookmark here

Just then, I spat acid out of my mouth, I don’t know how. The acid landed on his squeezing hand tearing through the flesh as soon as it made contact.Bookmark here

“AHHHHH!!” He moaned in pain as he dropped me on the ground. Bookmark here

I gasped for air aggressively trying to breathe, and recollect my surroundings. I got up immediately attempting to gain my balance. As I began to see things see clearly, I looked as the masked man stood up. I took a glimpse at his hand. It was totally healed.Bookmark here

“You’re from this clan!?” I asked in shock “But… who sent you?!” I could see the cold stare his yellow eyes gave through the mask. He didn’t look the least bit interested in answering my questions.Bookmark here

“I told you before boy, I’m here to kill you!!!” he exclaimed.Bookmark here

Before I knew, he charged attempting to stab me with his sword, I sidestepped narrowly avoiding the blade. He then turned his body and swung his sword aiming to cut my head off, but I ducked just in time to only lose a few strands of my red hair. But, before I could balance myself completely, he side kicked my face straight out of the window.Bookmark here

I land rolling on the ground before stopping on my hands and feet. I looked up, but I saw no one near the window. Just then, like a sixth sense, I moved my body out of the way as a knife was thrown directly at me from the entrance of the wall. It cut my face a little as blood was rushing out. Bookmark here

“You won’t get away!!!” the masked man proclaimed as he came out of the same place where the knife was fired.Bookmark here

I ran as fast as I could yelling for help but no one was answering ‘W-What the hell!? Is this some kind of Nightmare?’ I thought as I continued to run past the tall, and quiet apartment buildings. After running for almost what felt like an hour, I made my way into an alley way to find someone, anyone near the windows. All the apartment lights were off. “Are they ignoring me?”Bookmark here

“Why wouldn’t they? After the trouble you caused daily.” The masked man was now at the entrance of the alley “Do you really think they would help an abomination like you?”Bookmark here

I was silent. I knew he was right. “But then what about you? What did I do to you?” I asked the man.Bookmark here

“I’m only… doing my job.”Bookmark here

I jumped on the wall and made my way up the apartment building. “HELP!!!” I yelled hoping for anyone to answer me. Before I could notice anything, the man appeared in front of me, picked me up, and threw me so hard that I almost flew over the wall outside Raibarumura. Bookmark here

Barely Hanging on to the edge, I tried to pull myself back up. Just then, the man appeared above me and stepped on one of my hands which I was using to hang on to the edge with. He then proceeds to pull me up by that hand.Bookmark here

“I’m sorr-” before he could finish his sentence, I kicked him on his mask breaking it and hurting him in the process. He didn’t flinch as his wounds were healing.Bookmark here

I looked in horror as the man behind the mask was the person I would never have expected. Bookmark here

“I can’t go on any more Araya.” she insisted “My… leg, it… hurts.” He looks at her leg and discovers it has cut deep into the third layer.Bookmark here

“W-When did this happen?” Araya asked concerned and bewildered.Bookmark here

“I don’t know, maybe an enchanted weapon on the floor?” she responded although unsure of her answer “but it hurts soo much. I-I can’t…” Tears began to fall from her eyes as the pain was too unbearable for her.Bookmark here

“It’s okay we’ll get some help after we leave the village.” He reassured her.Bookmark here

“HOW ARE WE GOING TO LEAVE!!!?” her voice was so loud that Araya was shaken by it. “We’ll die soon wont we?”Bookmark here

“Don’t lie to me Araya!” Her voice began to crack as she looked at their son. “He’ll die won’t he?”Bookmark here

“No.” Araya said in a calm tone “As long as I am here, as long as this family is still fighting, even if you and I don’t make it, I swear that nothing will happen to him. But, we have to remain strong for him because if we quit on him, then who will help him?”Bookmark here

“But I don’t think I have the strength.”Bookmark here

“Yes you do, you have strength in me. There are soo many thing I can’t do without you. That’s why even when it seems you don’t have the strength to move on…” as Araya said this, he used his second arm, went under her knees and picked her up from the ground. “… You can always count on me to have enough for three of us.”Bookmark here

“Why are you soo confident?” Bookmark here

Araya let out a soft smile and whispered in her ear. “Because… I love you and him, and that love gives me confidence.”Bookmark here

She put her head on his chest after hearing this, “Sorry, I’m just really hungry.” She said blushing,Bookmark here

“I know, hahaha!” Araya replied as he chuckled.Bookmark here

“Stop right there!” one of them said as they all pulled out their swords from their sheaths.Bookmark here

“Araya!!” Mariam exclaimed scared of what was about to unfold Bookmark here

Just then, like light, one of the soldiers had their head cut off. Two people appeared in front of Araya and Mariam standing upright with their swords drawn ready to fightBookmark here

“You don’t sound happy to see me Araya. HAHAHA!!!”Bookmark here 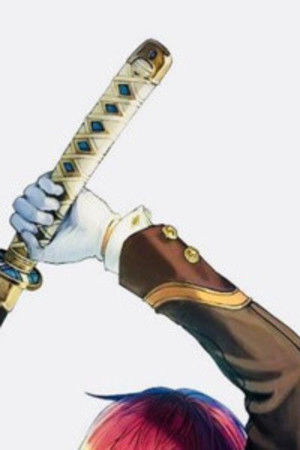