2 months after the ceremony, it was their first day.Bookmark here

Vincent woke up then he went to the academy, seeing so many people looking at him made Vincent nervous and excited.Bookmark here

He went inside and the academy was huge. He looked around the school and it was like a paradise. Cafeteria with any food you want, A room of your own, toilets, and a roommate.Bookmark here

And yet there is still more that Vincent didn't explore, but an alarm rang throughout the whole academy and people went to their own classrooms.Bookmark here

And we are left with Vincent, currently confused on what classroom he’s going to go to.Bookmark here

"Are you lost?" A sinister voice was heard.Bookmark here

Vincent got scared, when he turned around. He saw a man with a long sleeve shirt, wearing a mask that covered his eyes as well his hair.Bookmark here

Vincent, who was still confused, asked. "Who are you?"Bookmark here

He smirked and laughed.Bookmark here

Vincent was still confused and joined the laugh afterwards.Bookmark here

"The name is Ren, Professor Ren. You are Vincent Aishte, right?"Bookmark here

Professor Ren laughed and smiled, after a while.Bookmark here

"Well, you're in my class Vincent, and in my class. Only tough students can pass through it. If you move as slow as a pussy, you're dead as rotted like my brother."Bookmark here

As they both went to the classroom, Vincent saw many people inside. A total of 24 people.Bookmark here

“Uhh— ha— Hi Everyone, The name is Vincent Ashite, I joined this academy because...”Bookmark here

Vincent sat down in confusion while Professor Ren discussed the rules in the Homuran Academy. Everyone was paying attention until suddenly…Bookmark here

Ren grabs his desk, throws it on to the window glass, leaving the glass shattered then proceeds to laugh maniacally.Bookmark here

The students were startled, Some were terrified and few were interested.Bookmark here

Ren proceeds to slam the Board with massive impact and laughs... again, and says loudly with a sinister grin.Bookmark here

"Students, It’s time for my favorite part of this Academy—"Bookmark here

One of the students stood up (Shriled X) and asked why he breaks so much stuff.Bookmark here

After Ren said the reason, he proceeds to incanting “Void Style, Manipulate: Dark Dome”. Making him summon a black thing in the ground, slowly engulfing the room. Turning the surroundings as dark as the night.Bookmark here

As the students were still trembling covered in sweat, Ren explained the rules with excitement.Bookmark here

"By 1v1 fighting, the two of you will get to know each other better. Your powers, personality, and capability to fight is introduced while the pair of you are fighting. The one that gets the most damage proceeds to the next student until the Time ends. The time starts when two of you are actually fighting. End time: 10 minutes.”Bookmark here

“If you kill or faint a student, the one who did that will get exiled, just kidding”Bookmark here

“—If you want to, do it. I can heal you with Continuous Seal: Heal anyway and from the words itself. You heal someone by repeating 5-10 hand signs until the desired condition is reached.”Bookmark here

“If you don't want to fight. I’ll fight you with the other students who withdraw this 1v1. And the most important thing, Introducing yourself.”Bookmark here

“When the time runs out, hug each other out”Bookmark here

As the darkness consumes the room, the students are getting paired by the surface where they stood. Vincent was paired with a boy named Karuma Jen Reiss with the Arcanae Black Pocket who’s family is known for its stealing-based power.Bookmark here

After a moment, the pairing is done. As the Professor is ready to announce the start of the fight, he gets cutted by a guy in a blackhood asking who he is.Bookmark here

“Oh haha, where are my manners”Bookmark here

“I am Ren Darkfright, the Commander of HSMA (Homura Secret Mission Agency): Asoko Squadron, Located and living in Asoko, Homura. Just above Teki, Homura where Aishte lives. I have an addiction to sweets, and have the Arcanae: Void, which makes me able to manifest and do anything with voids. And, your homeroom teacher”Bookmark here

As Ren finally started the fight, the sound of chaos overwhelmed the silence of desperate students.Bookmark here

While the fight progresses a sinister voice was heard:Bookmark here

“Punch here, kick there, so noisy that it feels like we’re in a rumble fight, Right devil?”Bookmark here

A guy with blue hair and a dark blue hooded shirt covered with a brown coat sneaked to Vincent's back like lightning fainting Karuma in the process. Vincent panics and quickly slashes to his back but gets blocked by the mysterious character.Bookmark here

“Who — the hell — Are you?”Bookmark here

As they clash, they get eye contact, the shady fellow gets confused on why Vincent doesn’t know him.Bookmark here

The clash ended and they both got flown away while the mysterious guy questioned why Vincent doesn’t know him. And he thought it was a horrible bluff so he cried.Bookmark here

“How can a bottom-ranked devil don’t know me? —We’re luxurious” Bookmark here

“—But this is what I wanted, but no— Why?”Bookmark here

As Vincent snapped out of confusion he heard the mysterious guy’s worry and replied.Bookmark here

“The answer is simple”Bookmark here

As a luxurious clan member, the mysterious guy felt upset and insulted. Then a moment later he charges Vincent.Bookmark here

While sending fists and kicks, the mysterious fellow stated in a ferocious tone.Bookmark here

“I’m Blaze Lissclion, stupid— son of Aston and Embre Lissclion— I have the Arcanae: Speed.— Which can make me do things— fricking— fast,— got it memorized you idiot”Bookmark here

As they continue beating each other.Bookmark here

“That's all huh?—Who the hell— expects to recognize— a guy in a brown coat— to be luxurious?— You look more like a street beggar”Bookmark here

After hearing Vincent’s words, Blaze stated that he doesn’t like to look luxurious nor become one, he felt like he is not worthy for his state of livelihood. Afterwards, he asked Vincent why he’s asking this question.Bookmark here

The clash ended and Vincent mentioned that he can relate Blaze’s situation in some way he doesn’t understand.Bookmark here

“Because you have to wear the accusation about the founder's incident with your clan even though you don't want to, right?— That’s why you know how it feels like to be me— But remember this one fricking thing purple hair,— I’m a Lissclion and you’re an Ashite— That bullshit doesn’t make us similar.``, Blaze replied as he grabbed Vincent’s hair.Bookmark here

“I know and what you just said is cringe”, Vincent states with a grin.Bookmark here

In a sudden, Vincent told Blaze that they need to finish this exam.Bookmark here

“Hmm, figured it out too huh?”, Blaze replied out of surprise.Bookmark here

Vincent nodded with a grin.Bookmark here

As they both aim their finger of truth to the culprit, with all their might. They both cried.Bookmark here

“The real enemy of this exam— is you—”Bookmark here

Meanwhile, in the HSMA torture-interrogation room, A weakened, beat-up Naiyhto covered in his own crimson gore, got tied up to a rope connected on the ceiling and is currently questioned by Aston while his colleague, Yoteigai Ko checks out on what is in the mysterious syringe from a closer look.Bookmark here

“Where do you get this thing?”Bookmark here

Naiyhto doesn’t recognize the thing causing Aston to beat the crap out of him afterwards.Bookmark here

“Do you think I believe such crappy dialogue from a nuisance like you?— Why do you have this then?”Aston said.Bookmark here

Naiyhto replied. “I don’t know anything about that, I— I only—” Bookmark here

“What—the fuck— are you doing yesterday then?” Aston cuts in with a monstrous tone of voice.Bookmark here

While Naiyhto petitioned Aston to spare his existence, Aston states a fact.Bookmark here

“But you’re a teacher, your profession has the biggest income in the whole village-country stretching from 50K - 100K chronysus a month”Bookmark here

Naiyhto told Aston about his younger sister having Leukemia disease and needs 5.3M chronysus for its full treatment. He only did all that since they can no longer buy food because of this matter.Bookmark here

Aston thought he’s bluffing so he raised his hand and mentioned “Manipulate”. Before he finished the incantation, his Arcanae energy overflowed from his hands and formed a lightning-like structure around it making his hands move faster at the same time.Bookmark here

As Naiyhto cries in his regrets, Aston grabbed his hair and asked.Bookmark here

Naiyhto asked about the question with the regret gone.Bookmark here

“Do you know that if you have proper control of your Arcanae, you can skip incanting it? Because the incants only guide your Arcanae energy to what techniques to make in your early stages of using it. And if you no longer say incantations, it means you’re pro on using your Arcanae.”Bookmark here

“—The question is, what am I famously called for? You’re a teacher after all so you can answer it.”Bookmark here

Naiyhto stopped crying and started thinking, While reminding himself that he’s waiting for this moment. The moment where he finally died for the sake of his kinship. The day he can finally rest. The day where he meets his memento mori.Bookmark here

The moment Aston is about to put his hands full of Arcanae energy to the convict. Naiyhto starts to laugh while crying, and asks Aston to promise him on taking care of his only relative. Aston responds with a cold “yes” yet covered in tears. Then proceeds impaling Naiyhto in the chest.Bookmark here

“What is her name?” Aston coldly asked.Bookmark here

As Naiyhto is on the brink on death’s hands, he replied “Nozomi (Hope)”.Bookmark here

After Aston heeds Naiyhto’s words, the teacher passes with a smile.Bookmark here

Afterwards, Aston recovers from the tears and calls Yoteigai if he found something interesting on the syringe.Bookmark here

Yoteigai finds out that the syringe came from a shady company called “Infelentia”.Bookmark here

After finding out the mystery, they proceed on going to the leader’s office looking for answers.Bookmark here

As they watch the Homuran Academy while on the way. They saw a guy jumping out of the window, making Aston think.Bookmark here

“You reminded me on Rengoku’s brother, I hope you rest in peace. Naiyhto Makushi.”Bookmark here 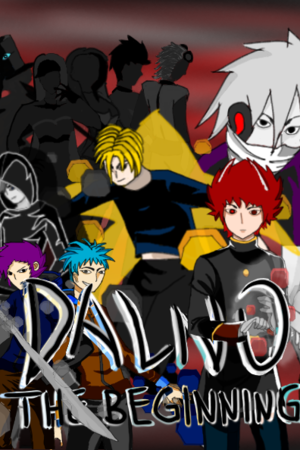