Beyond the Borders — Volume 2

Shards of rocks battered against the wooden oak. Aryia could feel the weight of the desk pushing against her back as she loaded a new magazine into her pistol. How is she able to do that, she thought as she cocked her pistol. After a slight pause of rocks abusing the desk, Aryia stood up and aimed her weapon at the girl.Bookmark here

Intense heat and a blinding light forced Aryia to duck back behind cover, however, she found herself holding her right eye as the pain took over her mind.Bookmark here

Aryia’s breathing continued to speed up as she tried to keep her mind on the life or death battle she was in. A few seconds passed as she continued to sit there. No sound could be heard. Without a second to lose she stood up and aimed her gun at the door. The girl that had attacked her was gone, leaving Aryia alone with Lylianna.Bookmark here

Lylianna was shackled down to a metal table in a room that looked more like a lab for human experiments and unspeakable horrors. She was stripped down into nothing but her white colored underwear and appeared to be unconscious. Aryia headed over to the table and undid the binds around her wrist and ankles, placing her body against the wall. After a few seconds she opened her eyes.Bookmark here

“Seems you got a makeover,” Lylianna said with a chuckle.Bookmark here

Aryia did not seem to find her joke funny in the slightest.Bookmark here

“Are you all right?”Bookmark here

“I’m fine, but you need to go after her. She is going to kill Amalthea.”Bookmark here

“How I do I battle someone that can use all four elements like that?”Bookmark here

“You shoot them in the head. Remember, she isn’t immortal, just a bit more powerful then usual. Just be careful, she copied my magic too.”Bookmark here

Aryia pulled out her small medical kit that she had strapped around her thigh and placed it on the floor. She quickly looked through it, trying to find some disinfectant to help the burn wound on her face heal.Bookmark here

“Just let me do it,” Lylianna said as she grabbed the medical supplies.Bookmark here

Lylianna carefully applied the disinfectant onto Aryia’s face, finally covering her eye with a white sterilized bandage. After she was finished Lylianna kissed Aryia’s lips gently and then smiled a warm smile that would melt even the coldest heart.Bookmark here

“Now, go save our queen.”Bookmark here 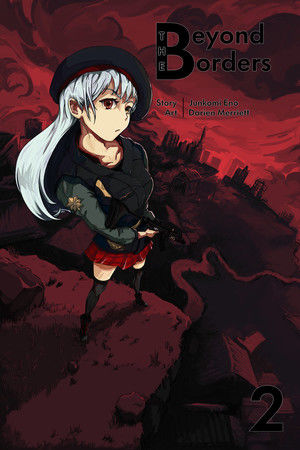 Beyond the Borders — Volume 2