Vomited on the Way to Work

Yuma sighed as he gripped the handle of his briefcase tight in one hand. The handrail of the train carriage with the other. Kyoto. The last place he thought he would return to. Especially, after working his way up to a Senior Business Analyst role. At Canyon IT's CEO Executive office in Tokyo.Bookmark here

Yet here he was, crammed into the morning rush train from his apartment in Takeda. Headed for his new Canyon IT office at the heart of Kyoto's CBD. A high-rise building that was a fraction of the size compared to his old office at Hachiman Square. Somehow, Kyoto never felt 'City' enough for him, that was one of the reasons why he had left the place ten years ago.
Bookmark here

In a climate of pending recession and social media activism, he counted his blessings that he still had a job. Although, his apartment was only possible because of his generous rebate from his parents, who owned the building complex. Being under his parent's roof again was an inconvenience.Bookmark here

"Kyoto City. Kyoto City. The doors will open on the left." The train carriage's announcer broke him out of his pensive thoughts and mood.Bookmark here

He mindlessly ambled out of the sardine-packed mob and squirmed when he felt something wet and heavy to his back.Bookmark here

"Hell!" He cursed when his back was whacked to make him stumble to the ground on all fours.Bookmark here

When he managed to scramble to his feet, he saw a pregnant woman in a pink work overcoat. It was opened to reveal her conservative suit dress of a corporation's blue and white colors. The woman was unconscious near his feet.
Bookmark here

Crap! He had no idea what to do.Bookmark here

"Miki! Miki, don't die on me! You still need to hand over my Yarichin Bitch Club specials!" Another woman hurried to the fallen woman's side, wearing the same overcoat and corporation uniform.Bookmark here

"Don't stand there! Get water!" The woman snapped Yuma into motion.Bookmark here

He hurriedly procured a bottle and cup from the vending machine nearby.Bookmark here

The pregnant woman was coming around by the time he had returned to offer the water.Bookmark here

"Thank you, sir." The woman called Miki weakly thanked him, as she took a sip and wobbled to her feet with his aid.Bookmark here

Yuma frowned at the sight of her feet in heels. Wouldn't walking in those be dangerous in her condition?Bookmark here

"Thank you," the other woman said with a sigh of relief.Bookmark here

"Do you need me to call you a taxi?" He offered the women.Bookmark here

"No, no, but, um, you might want to do something about your jacket." The other woman screwed up her button nose at the sight of his back.Bookmark here

Just his luck to be vomited on for his first day at work.Bookmark here

"Don't worry about it." He reassured the expectant mother.Bookmark here

"Look. I'm going to have to clean up somehow when I get into work. It's better I take a taxi. You can share it with me?" He offered again. This time the women agreed.Bookmark here

It was just their luck (or Yuma's bad luck) that all three of them were headed to the same destination. Although, unlucky for the poor cab driver who politely accepted their patronage whilst scrunching up his nose at the unpleasant smell that lingered around the handsome man.Bookmark here

When the cab driver was given the story, he jumped to a conclusion that Miki and Yuma were newly wedded. Neither had the heart to correct the man, especially when he was giving them a generous discount on the cab fare with blessings.Bookmark here

Yuma had learned that Miki was Miki Tanaka. She was the secretary of the Sales Department's general manager. And a woman still slender in figure despite her bump. His impression of her was wholesome, delicate, and amicable. Although her snort and giggle, when the other woman cracked a few one-liner jokes, was unexpected.Bookmark here

The other woman was Sei Mikorin who held common features, had her hair up in a conservative ponytail, and wore her uniform at the bare minimum regulations. It seemed she was part of the same team as Miki. Another secretary, but for the support team's general manager.Bookmark here

"Oh, you're starting as a personal assistant for Furuya-sama." Miki rephrased his new role with an awkward pause.Bookmark here

Both women shared pensive glances before they had unconvincingly brushed off his question as nothing of concern. Before he could question further, they had reached their destination.Bookmark here

Yuma thanked Sei for her instructions to the ground level showers and restrooms.Bookmark here

Not wanting to give a bad impression to his boss on his first day, he hurried to a shower room to freshen up. Doing his best to clean and air-dry his jacket under a toilet hand-dryer.Bookmark here

When he felt certain he was an ideal image and smelling fresh, he confidently stepped out and was slammed to the ground in the crudest way. He fell with his legs up in the air to show his perky butt to oncoming (soon to be) fellow employees.Bookmark here

"What the hell?!" He inadvertently cursed aloud when he managed to scramble to his feet.Bookmark here

"Oh no! I'm very sorry!" A mousy voice apologized to him over and over.Bookmark here

A beauty to rival those pretty-boy models his old department had hired for promotion campaigns. He wore a conservative blue suit, elegant butterfly collar shirt, and rainbow tie; slender legs in navy slacks, and expensive loafers. He frowned when he saw slight watermark stains all about his ankles and the links of his silver watch were slightly mangled, evidence of snagging.Bookmark here

The pretty man was on all fours before him, scooping up strewn stray papers.Bookmark here

Yuma appreciated the man's crisp scent of lemons with a heavenly sigh. It was a nice change from the vomit smell he had to cope with until his arrival in the office.Bookmark here

He sighed and dropped his anger, bent down, and helped the man scoop them up.Bookmark here

"Thank you!" The man heaved a sigh of relief when their eyes met.Bookmark here

"Oh, Saito-san! Great to see you. Follow me." His voice changed to a chirpier tone when he recognized Yuma.Bookmark here

"You know me?" Yuma asked as he hurried after the man, who was a fast walker.Bookmark here

"Of course! I've been expecting you." The man stopped to face him. He awkwardly laughed when his papers fell to the floor again.Bookmark here

"I'm Furuya, Kou. Your new boss." He cheerfully introduced himself after he had scoped up his papers for the second time.Bookmark here

Yuma gulped when his eyes held Kou's, feeling like his gaze was being enchanted. He cursed the mad flutters he felt from his heart. The man definitely held a charm that screamed, 'protect this maiden!'Bookmark here

"Okay." It was all Yuma could say.Bookmark here

"Have you signed in?" Kou cordially asked.Bookmark here

"Not yet," Yuma replied, his mind was still transfixed on Kou's face for some weird reason. Dormant feelings were triggered, those he had thought would never resurface.Bookmark here

"Okay, follow me!" He cheerfully ordered him and led the way back to Reception.Bookmark here

Yuma managed to sign in and reach the elevators with him without further incident.Bookmark here

Kou happily filled him in on the history of the company and the department he would be spending most of his hours slaving away.Bookmark here

"Your team is on Level 11. You'll need to swipe your pass here, then press the [11] button to reach our level." He showed him the rectangular gray box that was set just below the level and emergency call buttons of the elevator panel.Bookmark here

Yuma nervously scratched his head when he watched the papers slide to the floor when Kou went to swipe his employee pass on the box, then press the level button for number [10].Bookmark here

"Oh, wrong button. Have to try it again." He awkwardly noted, repeating the process and pressing the [11] button.Bookmark here

They rode the elevator more than once until they eventually reached Level 11. However, the doors wouldn't open. They stood in uncomfortable silence as they waited. A few minutes ticked by.Bookmark here

"This is strange." Kou frowned.Bookmark here

His fingers trembled nervously as he pulled out Yuma's badge from his pocket and frantically continued to swipe and tap it on the security box. He frantically kept pressing the number [11] button.Bookmark here

They both yelped when the elevator jerked to a sudden stop with a few bounces.Bookmark here

Wanting to assume the lead and save face, he pressed the elevator's red button to call for help.Bookmark here

Suddenly, the elevator lights changed to a warning red color and flickered infrequently. An annoying bell resounded throughout the compact space, making their ears ring.Bookmark here

He pried open the panel that covered the handset for the PSTN line to the building's security and pressed a set of number buttons as noted on the label above them.Bookmark here

"God. Tell me this isn't some Hidden Doors game," he groaned with the thought.Bookmark here

A voice crackled in his ear. "Don't worry, Sir, we see the problem."Bookmark here

Yuma frowned at the casualness of the man's voice from the other end of the receiver. His expression soured when the voice added.Bookmark here

"We'll get you out, but you might wanna take out extra life insurance working with our President."Bookmark here

The line went dead before he could come back with his questions.Bookmark here

"Are they coming?" Kou gingerly asked behind him.Bookmark here

Yuma relaxed his tension with some slow breathing and faced him with a reassuring smile.Bookmark here

Kou heaved out a sigh of relief and yelped when the elevator jerked into an upwards motion. The motion made him stumble into Yuma's arms.Bookmark here

The sounds of their heavy heartbeats racing simultaneously made them both hastily pull away with awkward blushes.Bookmark here

Yuma wondered how much a life insurance policy would cost him.Bookmark here 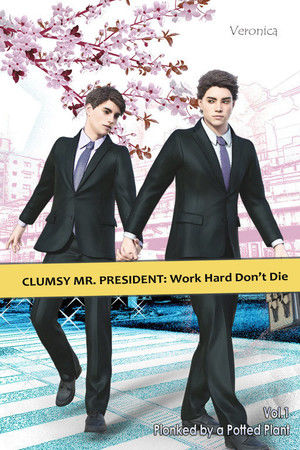