Two opposing warriors stood atop the mountain’s peak, surrounded by corpses. There were too many human cadavers to count. Yet, perhaps even more harrowing were the five bodies that appeared to have been oni in life. The two fighters, in-fact were also a human and an oni. A tall, muscular samurai with long, well-maintained black hair and beard and an oni with a fairly average humanoid female figure and long, unkempt blonde hair. The human warrior drew his bloodstained blade and pointed it toward his opponent.Bookmark here

The oni stared down at her foe’s sword with a blank expression. “How do you wish to cut me down with that thing?” she scoffed.Bookmark here

The man looked at her vacantly before his expression shifted to a grin. He let out a hearty laugh in his opponent’s face, covering her in spit. “Don’t you see all this blood on my weapon?” he roared, “Do you really think this is the blood of humans?” He thrust his blade forward, piercing the demon’s right arm. “Nay, this blood belongs to your kind, oni!”Bookmark here

The oni cried out in pain; pulling back before her foe could sever her arm. “That’s not possible!” she gasped. “No sword can pierce an oni’s flesh!”Bookmark here

The samurai chuckled. “This is no ordinary sword; it goes by many names… Sun-Nashi, Tomokiri, Higekiri…” He observed his foe’s expression as her face shifted to a look of fear. “Oh, so you’ve heard of this sword?” the human asked his demonic adversary.Bookmark here

“I thought…” the oni stammered, “I thought that that blade was but a myth!”Bookmark here

“Oho,” her opponent smirked, “I assure you, this is Sun-Nashi in all of its glory!” The man leaped forward, slashing the girl’s right arm in one swift motion and laughing as it fell all the way down to the ground below.Bookmark here

“MY ARM!” the oni screamed, jumping back and clutching her open wound with her remaining hand.Bookmark here

“Stings, doesn’t it? … But that pain you’re feeling right now is but a fraction of the pain you and those ‘Four Divine Kings’ caused me when you RANSACKED AND DESTROYED MY VILLAGE!” the human bellowed, following with another slash!Bookmark here

“That’s not true!” the oni cried, “We would never do something like that!”Bookmark here

“LIES!” her opponent screamed, “It’s about time my Sun-Nashi earned another new title! …Onikiri!” he roared, bringing his sword down swiftly towards the oni’s head.*Bookmark here

The man’s eyes widened in horror as he watched his katana fall through the surrounding clouds as it plummeted to the earth below. He had known that oni were among the strongest youkai, but for one to snatch his Onikiri with her single bare hand and toss it aside… Unthinkable! “How… HOW DARE YOU?!” He looked around. Left. Right. Up. Down. The oni had vanished. “Hmph,” he sighed, “one day, oni… One day I will have your head.”Bookmark here 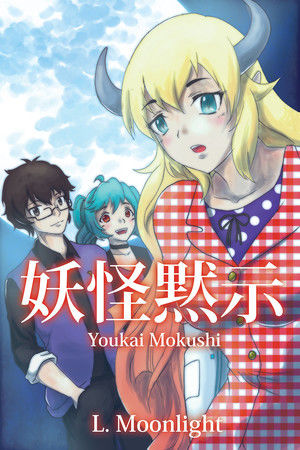