Once upon a mirror...

The boy had forgotten to close the window. The raindrops invited themselves into his room. The cold wind was howling, and the trees were rustling. The sound of a music box playing was echoing from somewhere far away. It was repeating the same song over and over again. The boy’s eyelids were heavy. His body was sluggish. He was still in a daze. Water kept dropping from the windowsill down on to the wooden floor. He gazed at the clock that was ticking away on his nightstand. The night was being lit by a full moon. He stood up and closed the window shut. The floor squeaked and his bare feet were standing in a puddle. The boy sighed and walked over to the bathroom. He turned on the lights and grabbed a white towel. His dog, a golden retriever was sitting in front of his long dressing mirror, wagging his tail from side to side. The boy kneeled down and dropped the towel on to the floor where the puddle was. It slowly soaked up the water and became a darker colour. The rain was heavy, and the drops were knocking on the window glass. Bookmark here

“Pomelo, what’s wrong?” the boy asked his dog. Pomelo kept staring at his reflection. The boy left the towel on the floor and walked over to look into the mirror as well. He was curious and sat down next to his dog. The boy’s reflection looked back at him. Pomelo stood up on all of his four legs and licked the boy’s cheek. He giggled and petted his head. The grey clouds were covering the moon. The music box was still playing. The boy noticed it coming out of the mirror. He placed his ear against the cold glass and listened carefully. Pomelo had sat down and placed his head into the boy’s lap. There was something else, besides the tinkling notes, the boy was hearing. It was the sound of someone breathing, deeply and quietly. The moonlight peeked through the clouds and shined on to the mirror. A small, wooden music box became visible. Its handle was turning around and around. And besides it, there was a girl sleeping. She had long, black, silky hair. Her eyes were shut close. She was wearing a white dress and no shoes, nor socks. The boy placed his hand against the mirror and took a closer look. He was not imagining it. A girl was sleeping inside his mirror. Unsure of what to do, the boy stayed in front of the mirror. He thought that if he looked away, the girl might disappear. Bookmark here

The moon had vanished from the sky and the sun was rising from the horizon. The boy had fallen asleep. His body was leaning over and his forehead was touching the mirror. Someone was lightly tapping on the glass. It woke the boy up and before him, he saw the girl. She was awake. Her emerald coloured eyes were looking into his. It caught the boy by surprise, and he moved away from the mirror. Bookmark here

“Can you help me?” the girl asked with a worried expression on her face. Her voice was soft. She was on her knees with both of her hands pressed against the mirror glass. Bookmark here 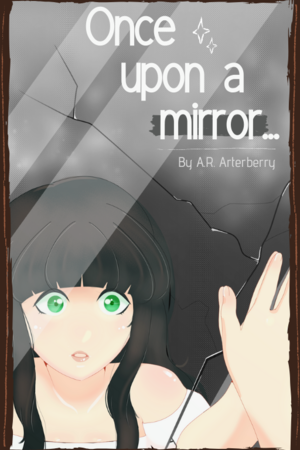 Once upon a mirror...