A week had passed since Tokyo fell to the demons. Since no humans were prepared for the battle, they lost in less than a month. Not long after the 5th city, Mecca, Saudi Arabia, was captured, Lucifer, Lilith, and 666 decided who would get which of the cities. Lucifer agreed he would take Jerusalem and Mecca. Lilith agreed she would take Vatican and Varanasi. 666 took control of Tokyo, and when the fallen angels would take over Sydney, Australia, 666 would control that as well.Bookmark here

Fallen Angels were a rather unique race. Similar to every other supernatural race, they cannot be harmed by man made weapons. They also cannot die from natural causes such as old age or disease. However, they can still be killed.Bookmark here

As the Book of Revelation in the New Testament of the Bible says, back when the world was new, God created the angel race. These fallen angels were once angels. In fact, Lucifer was one of the Four Great Archangels along with Michael, Uriel, and Gabriel. He had short wavy platinum blonde hair, and wore nothing except a leaf covering his genitals, and had four wings. Lucifer was considered the most beautiful of the Angels. However, that led to him believing he should be God. So he spread his word, and it eventually got to Michael. Michael was the most loyal to God, and the most respected. Michael talked to Lucifer and warned him not to do anything that would go against God and his will. He even said, "I do not want to fight you, but I will if it means protecting God and his holiness". Lucifer ignored these warnings, and led a rebellion. 1/3 of the angel race fought with him. Lucifer took the form of a dragon and defeated many angels in battle, including some Archangels like Ariel, Azrael, Jophiel, and Raguel. But, Michael joined the battle, and defeated Lucifer. God won the war. Everyone who fought with God was honored properly. Because of his hard work and effort into the war, God promoted Raphael and made him the last of the Four Great Archangels. Meanwhile, as punishment for his actions, God cast Lucifer and his forces into the Underworld, which was all one at that time.Bookmark here

Then, they all had their appearances changed to demonic appearances, and became the Fallen Angel race. Lucifer became a tall gray skinned being, bald, bloody red eyes, blood veins showing, long claws on his hands and feet, a lizard's tail, and two dragon wings. Lucifer wore pope clothing and a hat like Jafar's from Aladdin, but all white and more Christian looking.Bookmark here

In Tokyo, a fallen angel was somehow killed and their body was at the dump. There was a detective group known as Seraph who took the remains of that fallen angel. Seraph was a group formed by Dante and Beatrice Makihara, to drive the fallen angels out of Earth. Besides Dante and Beatrice, Seraph had 4 members: Virgil Takahashi (archaeologist), Francesco Suzuki (mechanic), Aoi Nishimura (doctor), and Tadame Saito (cook). Dante has messy short black hair, hazel eyes, and was always seen wearing what looked like a wedding ring. Beatrice has very long black hair tied in a high ponytail with a red ribbon, hazel eyes, and like Dante always wore what looked like a wedding ring. (They were not married, as they are siblings also Dante is 19 while Beatrice is 17). Virgil has long black hair in a half up do, was more tanned than Dante and Beatrice, and had sea blue eyes. Francesco has neck length black hair covering his left eye, and has brown eyes with dark circles around them. Aoi has brown hair in a long pixie cut, green eyes, and nails painted pink. Tadame was unique, she has brown skin, long silver hair, rainbow eyes, and was very beautiful. All the members wore black pants, any colored shirt, and a black leather jacket. On the back of every jacket was the Seraph symbol: A face with 6 wings. Each jacket was unique.Bookmark here

Their base was beneath Aoi's sister Ciacco's salon called Ciacco's Hair and Nails. Below there are 6 offices (with beds), a kitchen fused with a dining room, a bathroom, and a meeting area. Virgil took a brief analysis of the remains, and said, "This is an Incubi, plural for Incubus. It's a male demon who lies with women and tries to have sexual activity with them. They take the form of really handsome men no straight women can resist". Tadame said, "Dinner is ready. Udon noodle soup with mochi". Dante said, "My favorite! Thanks Tadame!". Tadame laughed and said, "No worries". Francesco ate up, then lighted his cigarette and said, "So, Incubi, right?". Virgil said, "Well Incubus. They personify lust which is excessive sexual desire". Dante asked Francesco as he was about to grab a piece of an Incubus. "Francesco, how can we turn the remains of this Incubus into-". Virgil slapped Dante's hand and said, "Don't take handling fallen angel remains so lightly. Remember, these aren't humans, boars, koi carp, anything else we would normally see". He then put a glove on, then touched the remain, and said, "Better with a glove or at least some hand protection". Dante continued, "Into new better guns?". Francesco took a quick look and said, "Well, if we're talking 6 guns, I may have to pull an all nighter". Aoi said, "Well do it in the morning, you need your sleep". Francesco sighed and replied, "It's fine, I get the least amount of sleep compared to y'all".Bookmark here

Aoi said, "Fine, but don't get mad when you need to go see a doctor". She started laughing. Francesco said, "Real funny". Virgil laughed. Beatrice asked, "So, when do we claim Tokyo again?". Virgil answered, "I don't know-" BOOM!!!! A loud thud hit the ground. Dante asked, "What was that?". Aoi said, "I'll check outside". She left for outside, and saw Ciacco looking at a huge fallen angel. Ciacco has shoulder length black hair with the roots dyed blonde, green eyes, a short sleeved blue shirt, a black apron, ripped jeans, and brown shoes. Ciacco said, "Look at that!". It was 666. The body was a giant fur ball, with scrawny arms and legs. It had 7 stone masks scattered across the fur ball. 666 also had 4 wings.Bookmark here

Aoi and Ciacco were shocked. Aoi said, "Ciacco, run downstairs. Close your salon". Ciacco closed the door, flipped the sign, and she and Aoi went downstairs. Aoi yelled, "A FALLEN ANGEL IS HERE". Francesco said, "We need to leave. We don't have any weapons. It'll take me one all nighter to get 6 guns for us". Virgil went upstairs. Ciacco tried pulling him down saying, "ARE YOU DUMB???". Virgil looked and said, "By God...that is a fallen angel I can't recognize". Beatrice asked, "So you don't know what that is at all?". Virgil answered, "It's never mentioned in the Old Testament, New Testament, Torah, or Quran!". Dante said, "Has to be something...maybe a fusion of Lucifer and Lilith". The team saw 666 meeting up with another demon. She was a beautiful naked woman with two wings, very long blonde hair, and blue eyes. Virgil said, "That looks like it's a Succubi. A female version of an Incubi". 666 said, "Hello Succubi #012. I'm finally here to control Tokyo". Succubi #012 replied, "Great. Incubi #011 was a traitor and killed Incubi #009, so I killed him". 666 clapped and said, "Good job. Now, I shall go to the Tokyo tower". Bookmark here

Suddenly, 666 defused into 7 demons. Demon 1 was a tall demon with two horns, four wings, long claws on hands and feet, and had lion mane. Demon 2 had lines circling his eyes, nose, mouth, and actually had 4 eyes, and was very slim. Demon 3 had six arms, very buff legs, and an Ankylosaurs tail. Demon 4 was very fat, and had a huge mouth. Demon 5 was very skinny, had scrawny arms and legs, and a long tongue. Demon 6 was a buff demon with sharp claws and very bloody and sharp teeth, and had 12 eyes. Demon 7 was slightly fat, but had no legs and just floated, and had elephant tusks for teeth. They left for the tower along with Succubi #012. Virgil said, "Hold on...maybe that's a fusion of the embodiments of the seven deadly sins. Like the buff one, looked like it was gonna kill everything it sees out of hate, similar to wrath, which is extreme anger".
Bookmark here

Beatrice said, "That's a nice explanation! I never knew anyone as smart as you when it comes to this stuff". Virgil laughed and said, "Thanks. But we should work on the guns".Bookmark here 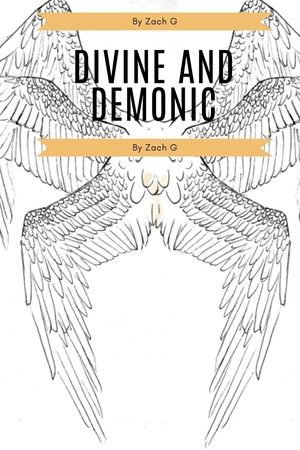