Jack and Mara walked through the dirt roads and quiet alleyways in the tiny town of Kallamat. Down by the river, men crowded the stream to pan it for gold, hoping to make their living or even strike it rich. On the edges of town, the openings of mineshafts gaped like the maws of colossal predators, luring in the hopeful and desperate with the promise of wealth and fortune, only to swallow them whole without so much as noticing. Bookmark here

The divide in the town was clear. The wealthy landowners all held estates on the outskirts with tenants renting their land nearby, while they all spent their days in town. In the lowlands flooded with slurry and mud, the canvas tent city had only just popped up with the opening of the brand-new prospecting sites. Jack could remember hearing how this used to be nothing more than a trading post in the middle of nowhere. Mara couldn’t stand the sight of the top hats and classy suits that too clearly showed the split.Bookmark here

“Why do we have to spend our time between contracts in towns? Can’t we just turn up and look at the noticeboards?” Mara whined.
Jack was getting sick of this shit. “If they see us, they’ll come to us with work we can negotiate harder for.”
She bemoaned this response. “Fine, but we’re going to go do something fun after this.”
“The pub opens at six.” Jack responded flatly. “We’ll have some fun then.”
Mara’s eyes lit up at the proposition, but she quickly hid it behind a cool mask. “Alright, but don’t give me shit about going overboard. If I want to get smashed, I’m gonna bloody do it.”
Jack acquiesced, rolling his eyes dismissively. “Whatever you say.”Bookmark here

As they walked down the street, Jack heard a faint metallic clickn one that seemed all too familiar. He took a turn into a nearby alley and saw a small child caked in dirt, wearing filthy clothes that were too big for him and badly in need of maintenance. He was covered in filth, his hands horned and calloused like those of an old man who’d worked his entire life. His eyes were large and sunken in, only making his sunken cheeks look more sunken-in. In the boy's tiny hands was a rifle, almost identical to the ones they had. Mara looked over Jack’s shoulder, seeing what was in his hands. There’s only one way he could’ve gotten his hands on it.
“Where’d you get that?”
“I found it in a ditch.” He responded, matter-of-factly “Next to a dead man. He can't use it anymore, so I thought taking it wouldn’t hurt.”
Jack and Mara locked gazes. It was clear that this boy had found a dead bushranger. Probably someone they knew.
Mara gestured for the boy to come closer. He did so with some hesitation, still clutching the rifle.
“Can you show us where you found the dead man?” She queried with an almost motherly tone that seemed rather odd to him. Jack had certainly never heard it before, and it took a good bit of discipline for him to refrain from commenting. The boy nodded, leading them away from the town and into the bush. He still clutched the rifle like his life depended on it, because if it was him that had been responsible, it would.Bookmark here

On a road through the bush on the outskirts of the gold mining town, the boy led them along its side, where a drainage gulley alongside the road kept it free of water, though it was seldom made useful. The little boy had the gun in his hands and was visibly trembling. Jack could tell the gun wasn't ready to shoot, though the kid probably didn't know. He could clearly see the hammer pressing against where he knew the pin assembly would be, his own rifle being of identical design.Bookmark here

'If it was a trick, he'd have it ready to fire at will, Jack thought to himself. The kid was clearly unfamiliar with who or what they even were, let alone how their equipment worked. Bookmark here

As they walked along the gulley's edge, Jack spotted a crumpled pile of cloth and leather, sprawled out at the bottom of the ditch not twenty meters off, having been obscured by a bend in the road up to then. Jack picked up pace to investigate it, Mara hung back with her arms crossed, her right hand going underneath the brown midriff jacket she always wore. He knew exactly what the signal meant and approached with caution.Bookmark here

Reaching the tangled mess, his suspicions were confirmed when he identified a section as the right arm of a man. Standing over it, he could see as well as smell that the body had been here no more than a few days. Some large blowflies had gathered around the corpse, but oddly enough the scavengers had not yet gotten to it. Local dogs as well as the corpse-eaters tended to make short work of any meat in the local area, especially human.Bookmark here

On closer inspection it was definitely one of theirs. The distinctive rifle bucket on their back that was over the long duster coat gave that away. Nobody else would dress like that, nor were their rifle buckets used by anyone else. Mimicking a sword scabbard, it was one of their older traditions that had adapted to the modern day. Jack turned the body over so he could get a better look. The boy had reached the edge of the ditch with Mara close behind him, her hand now resting on her blade instead of tucked into her jacket. 'Pragmatic as ever', Jack thought quietly.Bookmark here

What remained of the man’s face was hard to say. His nose was crumpled and mostly eaten away by bugs, the eye sockets absent of their glowing residents. His shirt, visibly a darker beige colour around the collar and shoulders, was stained a dirty crimson-tinted brownish black. The signature colour of dirt mixed with dried blood. It had originated from a relatively large hole in his upper chest, just to the right of the heart. The hole had an irregular shape but still bore the jagged characteristics of a gunshot wound. Ripping open his shirt, Jack got a closer look at the hole. It had a darkened ring around the main portion, with a smaller rounded part near the upper edge on the left-hand side of the body. Around the main part of the hole was a black stain which looked as if ash had been blown very directionally through a tube. There was no doubt as to what it wasBookmark here

"Shot in the chest from close range with cheap powder. Come have a look at this."
Mara stepped past the kid who still stood crading the rifle, putting a gentle hand on his shoulder as she did so. For the first time in his life, Jack caught a glimpse of something that he'd never seen from her though he had no clue what it really was. Mara, satisfied that the boy wasn't a threat, casually leapt down beside him, landing with her practiced precision he knew all too well.
"See the ring around the wound in his chest? Powder burn. He was executed." Jack’s solemn tone was very clear to her in his voice, even if his face stifled emotion from showing it.
"Did you check his tags? If this was the locals, they wouldn't have known to take them off."
Jack shook his head. Mara didn't wait for him, sticking her hand between the shirt collar and his cold skin without so much as a hint of hesitation. Feeling the clink of a metal chain, she pulled it out. Once exposed, it revealed a thin but robust silver chain with two silver plates, both engraved with the emblem of a snarling dingo in front of a rifle crossing a bayonet, identical to the tags under their own shirts; But his tags were covered in dry blood. Jack had already walked off, standing at the top of the gulley with the boy. Turning it over in her hand, Mara saw the name engraved on the tags. Bookmark here

Mara dropped the tags in shock, barely managing to hold back tears. “It’s Danny, or what’s left of him. We’re dropping like bloody flies. At this rate we’ll all be dead by year’s end.”The boy looked at her, a slight hint of curiosity in his voice that didn't show on his face. “Did you know him?” His seeming indifference to the presence of a corpse was rather unusual. Most kids his age would probably be freaking out.Mara and Jack exchanged looks, a melancholy expression on their faces.He nodded. “Yes. Danny was a good friend of ours. Uncle Peter was quite fond of him.”The boy looked at him, confused. He’d never heard an adult refer to someone else as ‘uncle’ before.Jack blushed slightly; Mara simply laughed at his embarrassment.“You’ll meet him eventually.” Jack looked at the kid. “Anyway, What’s your name”“Arthur.” He seemed surprisingly calm saying it. This kid must have seen some serious stuff.“You have a family?”“No.”He nodded, jumping back down into the gulley across from Mara and on the opposite side of the cadaver. He began to systematically strip Danny, taking the ammo belt, rifle bucket, and revolver off of the dead bushranger. He pocketed the tags, tossing the rifle bucket to Arthur.“Congrats kid, you’re one of us now.”Mara turned to him “Jack, what are you saying? We can’t just make him one of us. We need to take him to The Farm.”“We can’t do that” Jack sighed “The farm’s almost two weeks journey from here. We’d never make it.”Mara, her eyes darting between the grubby Arthur, the remains of Daniel and Jack’s complex expression, nodded solemnly. “I guess we’ll train him on the road, but he’ll have to go to The Farm eventually. We can’t perform the old surgeries without the tools.”His eyes lit up with joy, though the rest of his face portrayed no emotion. He put the blood-stained rifle bucket over his head and adjusted it to fit his considerably smaller frame. Jack handed over the ammo belt and revolver.“These are yours now. We’re not gonna baby you, so when you get into trouble, use them.”
Bookmark here 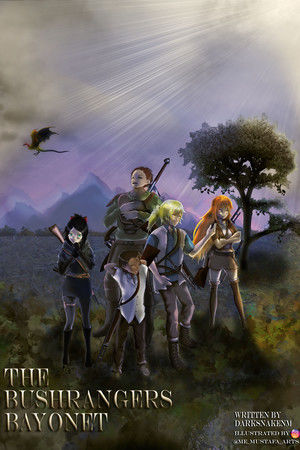