Have you ever wondered who, in a world of endless possibilities, would ever choose to degrade themselves by playing the role of a bunnygirl? Huehuehue… That would be me, Asami Usami, the narrator of this chapter of Tales of Virtual Shopkeeper. And this is a story that took place five in-game hours ago…

I sat at one of Utopia Online’s biggest player hotspots, looking over at a facemask-wearing mage as she performed a few magic-tricks with her staff. A small audience of players and NPCs alike had gathered to watch the girl’s cheap parlor-tricks.

Despite what her name might imply, we aren’t related in any way other than being members of the same Guild.

“Cut that out, Homura,” I said whilst rolling my eyes, “You’re going to waste all of your Magic Points.”

“Whatever,” she pouted, putting her staff back in her inventory, “It’s not like there’s any Quests we have to do anyway, so it doesn’t matter.”

My bunny-ears twitched as I heard the familiar footsteps of a certain someone’s metal boots. I groaned, rubbing my ears. (Regardless of how much I play this game, it always feels weird whenever my ears twitch on their own.) The footsteps drew nearer as I finally caught a glimpse of their owner.

“Well, well… If it isn’t the Usami Twins,” a familiar voice called out, “Fancy seeing you two here…”

Chris was the leader of our Guild, the Modern Crusaders. His avatar was well-toned and clad head-to-toe in heavy armor. It was no coincidence that he ran into us, he was clearly out of breath. Even to someone as dense as Homura, it was obvious that he had been looking all over Utopia Online’s overworld until he found us.

“I-it’s not like I was looking all over town or anything! I-it’s a total coincidence that we met up!”

Chris puffed out his chest proudly. “I accepted a local NPC’s Quest.”

I stood up, adjusting my shorts. “Oh? What kind of Quest…?”

“We’re going to take down a horde of Orcs that are terrorizing the nearby villages,” he beamed.

“Woah, woah! Time out,” I gasped, waving my hands out in front of me, “Our ragtag Guild of noobs can’t take down an entire horde of Orcs! That’s suicide!”

“Really, Asami? I think you’ll change your mind once you see the reward,” our Guild Leader smirked, opening up the Quest Log to show us the reward. Both my and Homura’s eyes widened as we read out the reward.

I rubbed my eyes, making sure I had read the number correctly. Sure enough, the Log said 3,000,000 Gold. Split evenly between the three of us, that would be one-million Gold each.

“Seriously?!” I exclaimed, “This took a sudden turn for the awesome!”

The Modern Crusaders Guild stood amidst a field, looking over the nearby village. I watched as Homura’s minidress and Chris’s cape blew gallantly in the breeze. I pouted, rubbing my hands together.

“It’s freezing out here! Why did the developers have to make the wind in this game feel so realistic?!”

“That’s what you get for using a bra as a shirt,” Homura smirked.

I stared down at Homura’s exposed legs, quivering from the cold. What a hypocrite.

“Just shut up and blast me with some of your Fire Magic.”

“Nuh-uh,” Chris interrupted, “Homura has to conserve her Magic Points for the Orcs. She’s the ace up our sleeve.”

I sighed, my breath visible in the frigid air. I shoved my freezing hands into my shorts pockets for extra warmth, but it didn’t do much.

“When are these stupid Orcs supposed to show up?” I complained, “I’m freezing my tail off over here!”

Chris withdrew a sword from his inventory and assumed a combat stance, “These Orcs are going to drop a bunch of Ability Crystals. Be sure to grab as many as you can hold in your inventories!”

I looked over to the horizon and, sure enough, a horde of Orcs was approaching slowly. There must have been fifteen… no, twenty of them!

“Uh, Chris… Are you sure that we can take them all?” I asked, equipping a dagger from my inventory.

“Fufufu,” Homura chuckled as she thrust her staff forward, “Leave them to me.”

Her staff shined bright as her body began to glow. She lowered her facemask dramatically as she began to recite an incantation in English. Her grammar was perfect, but the pronunciation left a lot to be desired.

“Darkness and light bound as one, form a seal that can’t be undone.

With this staff I beseech thee, break the seal just for me.

Form a pyre to scorch my foes, let me deal the final blow.

It’s time to expose the esoteric, now prepare for my greatest trick…”

“This is it,” Chris smiled.

“The ace up our sleeve,” I beamed back.

A sigil formed under the Witch’s feet as she yelled out the name of her ultimate attack, the strongest Fire Magic in the game.

…Nothing happened. Chris and I looked at each other, mouths agape, before looking over at Homura.

“You idiot,” I snarled, “I told you earlier to stop wasting all of your MP trying to impress those peons with your cheap party-tricks!”

“You got any more bright ideas, Chris?”

I looked over at our Guild Leader as he lay on the ground, a crestfallen husk of a man. “We were gonna be rich…”

I scoffed, picking him up off the floor and smacking his avatar across the face.

“Pull yourself together, man! It’s just a game!”

The Orcs drew ever closer on our merry band of idiots. I tossed my dagger, hitting one of them square in the chest. I hopped up and down on the spot.

“Did you see that, Chris? That was a direct hit!”

My celebrations were cut short as I watched the Orc remove the dagger and toss it aside.

I grabbed his avatar’s muscular arm. “I don’t think so. Have you forgotten that you’re the one who signed us up for this Quest?”

“Hey, you!” I pointed at Homura, “Do you have any MP left whatsoever?”

“Good enough. Use your weaker Fire spells and take out as many of these guys as possible.”

“Roger that,” Homura said, launching three fireballs from the tip of her staff. I watched as three of the Orcs were set ablaze, dropping a bunch of Crystals as they poofed out of existence.

“Great job, Homura! How much MP do you have left?”

“Aheheh…” she laughed sheepishly, “That was the last of my MP.”

“But there’s still 17 Orcs left,” Chris stated, “Do you have any more ideas, Asami?”

I paced around on the spot trying to think up a plan as the remaining Orcs approached menacingly. Homura was the only member of our party who had access to Magic, which seemed to be our best bet at taking down the rest of these monsters. Was there some way to replenish her MP, I wondered. That’s when I got an idea! I turned to Chris, who was once again lying on the ground.

“Chris, does any if your Gear give you increased MP?”

“I’m afraid not,” he said, pulling himself upright, “What about you, Asami?”

I sighed, knowing what had to be done. It wasn’t a lot, but my avatar’s shorts did grant me +50 MP. I reluctantly began to pull them off. Chris blushed as he turned away quickly, pretending that he didn’t catch a glimpse of my undies.

My face was bright red as I tossed my shorts at the Witch. “Just put these on and kill some Orcs, you moron!”

“How big is your butt?” she complained as she equipped my shorts under her dress, “These things are practically falling off!”

“Be quiet and blast those Orcs,” I snorted.

I watched as Homura rapidly launched ten fireballs from her staff, obliterating ten of the remaining Orcs.

“I’m out of MP again,” she informed me, “There’s only seven left, do you think we can call it quits now?”

“No way!” I placed my hands smugly on my hips, “We’ve come too far to stop now! That reward money will be ours!”

“Hey, Asami,” Chris began, turning towards me, “Those panties are giving me an idea…”

“I can’t believe you talked me into this…”

I stood in the center of the field, mere meters away from the seven remaining Orcs. Chris and Homura were watching me from behind a nearby rock, swords drawn at the ready.

“Are you sure this is a good idea?”

“Of course,” Chris assured me, “Monsters are attracted to other monsters.”

Using my above-average Seduction Stat to distract the Orcs, while Chris and Homura run up and strike them down from behind. The plan made sense to be sure, but that didn’t mean I had to like it. The Orcs looked over my body, ready to squish me to a pulp. I blushed, taking a deep breath as I struck a sassy pose.

“Hey there, boys. You wanna… play?” I winked playfully as they bent down to get a better look at me, lowering their defenses in the process.

On my command, Homura and Chris leapt out from their hiding place, slashing at the remaining Orcs in unison. After they had all been eliminated, the three of us gathered all the Ability Crystals that we could carry and headed back to town to claim our reward.…

I had just finished telling Yuu Watanabe my story as the final Ability Crystal disappeared in front of me. Yuu handed me back my shorts.

I placed a large bag of money on the counter. “Keep the change, my good man.”

As I headed out the door, Yuu asked me a question.

“Hey, Asami? How come you wanted me to put all of those points into Seduction? Wouldn’t it be better to have higher points in combat-oriented Stats? Strength or Luck, for example?”

I giggled. “Don’t be silly. Our Guild’s plan was so successful that we’re going to do the same thing again! We’re gonna be rich!”

I hopped out of the shop’s door, looking over at my companions as they waited for me.

“What took ya so long?” Homura asked.

“Yeah,” Chris added, “Are we ready to kill more Orcs?”

I smiled. “Huehuehue… You know it, guys!” 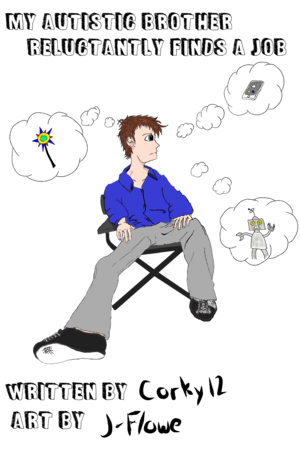