“In this forsaken pit?” I said.Bookmark here

“If you ignore the fallen, it’s not so bad,” Neeka said, her tail swaying behind her as she thought it over.Bookmark here

Charlie scoffed. “The fallen are so bad people don’t even hunt for the diadem anymore.”Bookmark here

Our leader nodded. “Red banners could be anyone though. Drusca, Piedtri, or one of the Holy Lances that keeps an army. I guess someone has decided they don’t like the borders around here. Or maybe someone’s running away?”Bookmark here

I sighed. “And what are we going to do about it? It doesn’t change the fact that we’re broke.”Bookmark here

The four of us sat in silence until Charlie snapped his fingers. “No, hold on, we gotta think of this as an opportunity! When we get out of here and we get the lay of the land, guys we’re surrounded by brand new suckers! Supply lines, camp followers, and meat heads with money!”Bookmark here

Neeka shook her head. “Charlie, cons are one thing but we kind of stand out as a group. Do you want trained knights hunting us down or something?”Bookmark here

Xon sighed and tugged at the neck of his shirt, as though it might let a gasp of air down his armor. The mossy courtyard we had taken as refuge didn’t do much for the heat. “Vichtstein was a crossroads long ago. I bet they leave tomorrow. Let’s just get the wine.”Bookmark here

We shelved the discussion, hid the eggs to get on our way back, and headed down to the lowest floor of Vichtstein. Not quite so far as the frigid lake around the castle, but at least to where there was loot to be had. Of course, there was good reason loot had lasted so many centuries. The center of the pit was cold and shadowed, filled with as many fallen as there were drakes and even dragons. We knew our way around though, and no dragon would willingly leave its wallow during the day.Bookmark here

Charlie took us right to a squat little complex that still had dangling signs of grapes and wine bottles out front. “We sure this is a good spot to hit?” I asked as the four of us peeked over a collapsed wall.Bookmark here

Charlie slugged my arm. “Come on, wine gets better with age. These bottles should be hundreds of years old! That’s gotta be tons of gold,” he said before jumping over the wall and slipping over to the building. Neeka took off up the street to scout.Bookmark here

Xon shrugged and said, “Most wine turns to vinegar. Might be worth some silver though?”Bookmark here

“Or, or we sell it to someone who doesn’t know wine turns to vinegar,” I said, and got a devilish grin out of the dragonkin.Bookmark here

The roads of any city were always laid out with the sun in mind, storefronts facing the light and residentials facing away from it. I imagined that the mercantile building had been a bit of both as it sat at the corner of a crosswalk. After the collapse, shadows loomed across it from the city above and the cliffs beyond. On Charlie’s signal, Xon and I trotted over with weapons drawn. I had a stout infantry blade that still felt like a cleaver. It was made for a man much larger than myself, but there was nothing to be done about it. At least Xon fit his weapon; a two-handed hammer with a back-ended beak. Charlie’s weapon was his most prized possession; a dueling blade he said had been his fathers, but I was pretty convinced it had been stolen just like the pot-shield he had in his other hand.Bookmark here

The three of us pried a window open and clambered in, our feet kicking up the dust. All kinds of rooms branched off to one side, even the kitchen. A hundred years of rot had left nothing more than the silverware. I made a note to go back for it once we had cleared the place. Bookmark here

Charlie said, “Up front, look alive.” I hoped for a moment that he meant it was a drake, even an overgrown one the size of a horse. We weren’t so lucky. We would have to fight for our loot.Bookmark here

We don’t know what the fallen are, not really. They stand on two legs typically, they have hands, enough wits to use a weapon, and don’t have a drop of blood in them. I’ve never gotten a good look at one in sunlight, but their bodies always seemed like living shadows that broke like glass when you got them, like they had crystalline bones within bodies of black goop. At least they were ungainly and always seemed off balance or simply unable to control their own strength. When we saw the trio lounging beneath the main staircase, they were babbling in their incoherent tongue. When they saw us, they lurched to their feet.Bookmark here

Charlie roared and charged in. No matter how many times we asked him not to shout, he always did. At least with a shield it made sense for him to take point; but, rather than protect himself with the pot-shield, he punched the nearest fallen in the face with it. The inhuman creatures had just stood upright and lifted their rusted weapons when Charlie reached them. Xon came in behind, sweeping his hammer into the right-most fallen’s side. The steel head connected and snapped the arm.Bookmark here

“Nice!” I shouted as the fallen staggered and screeched in pain. Charlie hadn’t been as successful, but in his defense, he was dealing with two of them at once and needed to avoid getting hurt first and foremost. I wasn’t doing nothing. I ran halfway up the staircase, getting above their heads before leaping down with a two-handed cut. I put all my weight into it, swinging down just as I was about to connect with the left-most fallen. My blade slammed into the wooden haft of its axe. It staggered, but shoved me back. I hit the ground and tumbled ass over teakettle, my back slamming against the staircase. When I looked up, all my eyes saw was the glint of light off the edge of the axe. Ancient steel ready to come down.Bookmark here

Before it could return the favor, Charlie stepped in from the side and thrust his blade through the fallen’s ribcage. He pierced its heart, if they could be said to have hearts, in one stroke and ripped his blade free as it disintegrated. Xon moved in and picked up the slack Charlie had left, thrusting the head of his hammer into the first fallen to knock it off balance, before sweeping back to shove his own away. Charlie dispatched the fallen before I even got back to my feet, and then Xon crushed the last one with an overhead blow. The murk of darkness muddied up the air as the fallen perished.Bookmark here

That was how most fights went; me getting saved by them. Even Neeka was better in a fight than I was. No matter how dangerous the fight had been, Charlie was able to laugh and smile afterwards. He even held out his hand to me and said, “Good work. You gave me a great opportunity. Just uh, maybe next time you don’t go so overboard? Keep your feet on the ground and stay light. I won’t always be here to save you.”Bookmark here

“Thanks Charlie,” I mumbled, shaking his hand and hanging my head. I hated being dead weight, but no matter how hard I tried, I was always useless in a fight. I was just grateful they hadn’t kicked me out and kept the loot split only three ways instead of four. If they had done that, I really would have had nowhere in the whole world to go.Bookmark here

Neeka popped her head around the corner. “I’ve got the wine!” Eight dusty bottles of red gold clinked in her grasp. She grinned, hefting the wine up as her tail flicked from side to side. Bookmark here

Charlie whooped and ran over to stare at the labels. He couldn’t read letters, but numbers were another matter. Scanning the dates, he tried to pick out the oldest of the bunch as he started asking Neeka about how many other bottles were down in the cellar below.Bookmark here

I couldn’t keep up with the speed of their conversation, so I moved over to Xon. The dragonkin’s most prized possession was his journal, a thick and leatherbound pile of paper he scratched notes and pictures into. As far as I could tell from peering over his shoulder, it was gibberish; but, he had assured me it was just the way his ancestors wrote.Bookmark here

“Learn anything?” I asked, squatting down and poking at the helmet that his hammer had flattened.Bookmark here

“Maybe. Maybe someone smarter could learn from my notes. Won’t know if I don’t take notes,” he said when he paused to sharpen the charcoal tip with his claw. He had sketched out an illustration of the three fallen. While his art would never win any awards, I always found it remarkable how easily he could create the proper impression with it, and how identifiable their weapons could still be even when smudged onto the page. “What about you? Did you learn anything?”Bookmark here

Xon paused to look down at me. “You’ll get there, eventually. You’re just the newest. Neeka was even more hopeless. Had to pull her out of a river. She bit me too. I think I still have the scar,” he said, holding up his arm and turning it this way and that. If there was a scar between his scales, I couldn’t see it. “There,” he said, pointing to a set of four holes; Neeka’s fangs.Bookmark here

I blinked and looked back at the feline girl. She was almost entirely human looking, save for the tail and the fuzzy ears. I had to look closely at her smile to see the incisors she had. It was a bit hard to imagine her drenched in water and biting. The way she was talking with Charlie about all the money they were going to make had her tail bobbing from side to side, swishing through the air and I found myself wishing I had sat down just a few more feet to the side…Bookmark here

Something rocked the ground, making the whole building shake as an explosion swept through Vichtstein. The floor lurched and nearly knocked us off our feet. Neeka dropped some of the bottles, snatching them mere inches from the ground as we all looked at each other confused. We all ran to the nearest window, tearing free the curtains and looking in the direction of the sound.Bookmark here

Something glimmered in the sky, like a trail of light that had arced down to the very center. Whatever it was had hit the water; a huge cloud of it had plumed into the sky and begun raining back down. The swampy smell of detritus reached my nose, like the rotten air had been pushed free. Normally the stagnant water only smelled in the sun-ward side of town, not where we were in the light.Bookmark here

“Guys,” Charlie said, his voice cracking. He coughed and quickly settled the slip, then turned back to us. “Grab whatever you can. That’s gonna wake a dragon.”Bookmark here

Over his shoulder, I saw the enormous, reptilian head he had seen. The serpentine predator had been woken from slumber by the explosion. It crawled out of the collapsed building that had served as its den, just a stone's throw from us, and then it looked right at us. “Go, go, go, go!” I shouted as all four of us turned and ran.Bookmark here 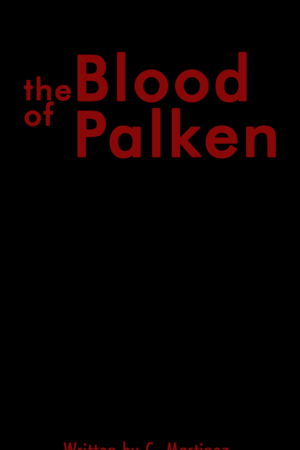 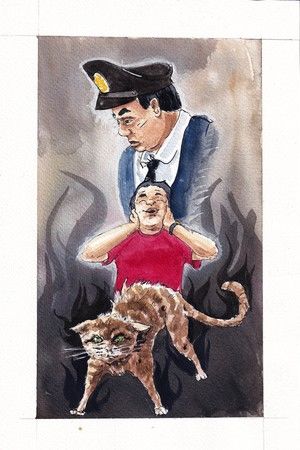