"Anthony, get up boy." Joseph grasped the sixteen-year-old boy's shoulder, not knowing he was still awake and shook him. Panicked, Anthony turned over to find his adoptive father standing next to his bed.Bookmark here

"We have to get you out of here. Change into something warm and come downstairs."Bookmark here

Anthony wanted to question, but he knew after years of living together, Joe wasn't one for procrastinating when something seemed urgent, so he followed orders.Bookmark here

"Here, take your pack, son, and hurry out the back."Bookmark here

Anthony didn't hesitate. He walked through the kitchen and grabbed the backpack leaning against the table leg. A knock at the front door startled them both and interrupted their plans. Joseph continued to wave the boy towards the sliding glass door leading to the backyard.Bookmark here

"Hurry up and get out of her, then meet me at the closest gate," he whispered as he approached the front door.Bookmark here

"But-" Ant began, but Joe waved him off.Bookmark here

"Do you know what hour it is?" He shouted to the individuals beyond the door, but no response came.Bookmark here

Anthony snuck into the backyard. The densely packed prefab duplexes neighboring their house had small lots that were hard to hide in. He turned back for a second and saw that Joseph had invited two large men inside. Joe seemed familiar with the two and was letting his guard down, but the men seemed perplexed, even disgruntled as if they'd recently lost respect for him.Bookmark here

No business of mi-Bookmark here

His thoughts were drowned out by the sudden roar of law enforcement vehicle motors. The sirens and lights weren't on, though they raced by as if heading to an emergency.Bookmark here

What's going on? Does this have to do with those guys inside?Bookmark here

The stealth books Anthony had read during his lunch breaks flipped through his head, nothing but broad strokes stuck out. Hug the wall, check your corners, keep low, those rules repeated in his head. Even if the authorities weren't after him, he didn't want to risk getting caught being mistaken as the common street skimmer either. However, it wasn't long before he'd found a different issue on his hands. Someone being disrespected by a rowdy bunch could be heard just out of earshot.Bookmark here

He stopped for a moment contemplating the fact that his luck wouldn't have it any other way as Joseph's many one-off lessons dialed in.Bookmark here

"You protect a woman in need, son. There's nothing more than that. You never know, could be your life partner in one way or another."Bookmark here

He knew he could get the jump on them, grab the person and run at the very least. Suddenly, a young girl's yell for help shattered his thoughts. Anthony shook Joseph's voice from his head and took action. As he crossed the street, he noticed hands descending onto someone within a group of individuals of varying shapes and styles. But before they could get a hold of the distressed girl, Anthony's arm squeezed through a gap and yanked on the girl's wrist.Bookmark here

Pulling her from their clutches, he got a whiff of alcohol that must have been radiating from the breath of the offenders.Bookmark here

"Run." Anthony tugged one final time as he sprinted toward one of the city gates.Bookmark here

Through bated breath, she was able to muster, "Thank you."Bookmark here

"You're welcome, but we have to break off here," he informed her as he continued his sprint. "Are you okay making it home by yourself?"Bookmark here

She paused for a moment her face seeming puzzled as if she'd recognized the boy. He didn't recognize her in return, but she seemed to be about the same age as he was. Affirmation lit up her face as she nodded with a grin that of only those who had figured out their entire life path would wear. He nodded back and let go of her wrist, watching from the corner of his eye as she crossed the street and disappeared out of sight. He was now back on track.Bookmark here

Successfully evading the many city dwellers sulking in the street lamplights, he arrived. A metallic door connected the inside of the city to the foreign world outside. There were only four entrances to the entire city and he was now staring at one of them. Though the door was huge, the guards' quarters within were close to uninhabitable due to the lack of space. The only reason he'd known this was through stories from his adoptive brothers, who were guards assigned here.Bookmark here

I'm assuming they're the ones meeting me here with Joseph.Bookmark here

No one lurked around the doors at night because doing so would be seen as an attempt at leaving, punishable by prison. He felt safer sitting in one of the nooks that Brad had shown him, hidden from the security cameras. A half-hour had passed when frantic footsteps approached the road adjacent to the door. The footsteps stopped, then a metal clang echoed through the streets, and the sound of rubber wheels rapidly drew near. Anthony's bones shook at the thought of peeking around the corner, but he must if it meant getting a glimpse at what he had to deal with.Bookmark here

As he did, a voice from a low-quality camera mic shouted out to him. "Cover your eyes!"Bookmark here

He recognized the voice, as well as the mini R/C device it came from. The sound of a metal pin could be heard as he clasped his hands over his ears and closed his eyes. A piercing noise still managed to make its way down his ear canals. Anthony continued to cover his ears, even after the high-pitched squealing had stopped. Someone tapped on his shoulder.Bookmark here

"Come on," Joe said. "We have to get you out of here."Bookmark here

Anthony nodded as he grabbed onto the extended hand of his caretaker. "What was that, anyway?"Bookmark here

"Just a small EMP I built. Had to knock out the cameras so we could approach. It won't buy us time, but it helps to prevent the city from getting even more information than they already have on the situation."Bookmark here

"But aren't most EMP's invisible? Why'd you tell me to cover my eyes? And what situation?"Bookmark here

"I had to emit a bright light along with the EMP blast to prevent them from catching a glimpse of the device used. Less evidence, the better." He paused for a moment as he picked up the now-destroyed device and let out a grunt as his arthritis-riddled knees popped. "And the situation your brothers caused for us."Bookmark here

"Donny and Brad?" They were also not his real siblings, just as Joseph wasn't a father, but they felt more like their role than he did.Bookmark here

"Apparently, they skipped town at some point and has the town in a ruckus. How they did it, I haven't a clue. But if Karina hadn't looked into it, we might be..." He stopped, taking a breath that seemed regretful as if he was figuring out how to continue explaining what happened. "That isn't important right now."Bookmark here

"Well... what'd they do? Where'd they go?" Anthony didn't notice, but his teeth chattered as the situation became tenser. He watched as his guardian now accessed the manual emergency panel used to open the gate in case of a power outage.Bookmark here

"Anthony, I don't know where they went, but they must have taken some technology with them. Extremely advanced technology, do you get what I'm trying to tell you?"Bookmark here

"You could go to jail if I don't-," but at that moment, a young girl, about the same age as Anthony walked up behind the two gents walking into the gate. She had a pack against her back and a look of determination.Bookmark here

"What are you doing here?" Anthony quietly expressed a want to shout at the girl he'd just saved.Bookmark here

"I wanted to come with you Ant!"Bookmark here

"Wait, how do you-"Bookmark here

"There's no time, get in." Joseph latched onto not only Anthony's shoulder but the girl's as well, pulling them into the guard's booth, shutting the door behind them. The bars raised on the opposite entrance as Joseph manipulated the manual controls further.Bookmark here

"Joe, are you sure there's nothing else we can do?"Bookmark here

"No, son. Your father asked me to protect you when you were just a baby, and right now, this is the best way I can do it."Bookmark here

Riley, the damsel formerly in distress, stepped out of the room and onto the grass with excitement in her eyes. But, as Anthony gave one last look at Joe and started to follow suit, Joseph grabbed onto Anthony's shoulder and turned him around, embracing him as a father would embrace his only son before his inevitable end.Bookmark here

"I'm sorry Anthony. By the Goddess, Fera, I know I was the best father I could be for you. I just wished I'd been better." The voice, stern but with a hint of depression, was all Anthony needed to return his adoptive father's embrace.Bookmark here

"It's okay, we all try our best, and group failure is spread evenly to all parties involved." Anthony let go of Joe at this comment and walked out the door. That'd been the most understanding either of them had felt for each other in their entire time together, and Anthony knew this fact, leaving with it as his last words, but not Joseph's.Bookmark here

"Anthony. Find your parents. Find your siblings. And find your ass home."Bookmark here

Anthony chose not to look back as the bars and shutters closed behind him. He just continued to look up at the starry night sky.Bookmark here 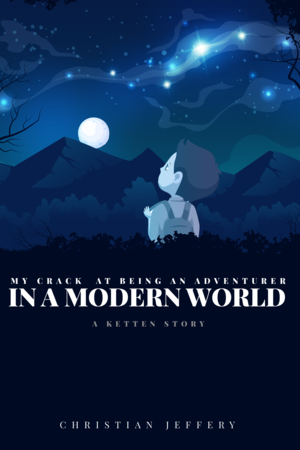