The First Day: The First Test

Nobaru woke up with a start. It had been five months since Akio's departure and today was his first day of school. He was excited and waited for this day to come. He woke up Eri, who was, as usual, a heavy sleeper. As he did, he thought of what kind of people he would meet and what he would be learning there. He also thought of the fact that Kaeda would be there as well. Both of them had grown stronger these past five months. Kaeda also had decided to enter Yanine with Nobaru. Yanine was a hard place to get into unless you were invited or your family had a lot of money. But the fact stood that the pair would be going to Yanine together.Bookmark here

Eri and Nobaru walked downstairs after taking a nice, relaxing shower and brushing their teeth. They noticed that breakfast was ready and took their seats. They greeted their parents with smiles and their parents responded with grins on their faces.Bookmark here

"Yeah! It is," said Nobaru and Eri in unison.Bookmark here

"How do you both feel?" he asked.Bookmark here

"Nervous. I've never talked to others besides the both of you, Nobaru and Kaeda. Don't know what to expect."Bookmark here

"Don't worry." said Nobaru "The people there will love you! You are a great girl. Why would anyone hate you anyway?"Bookmark here

Eri smiled at the compliment "Thanks.." she said.Bookmark here

"So what about you?" she asked "How do you feel?"Bookmark here

"I can't wait to go!" he replied "I'm excited."Bookmark here

"Especially because she is there with you," said Eri, smirking.Bookmark here

"Well be good and pay attention during classes." said Ren "But most importantly, have fun and make new friends!"Bookmark here

Nobaru and Eri ate breakfast and left excitedly for Yanine. It was a gleaming white building, very noticeable because of its enormous size. It was as large as a palace and within walking distance.Bookmark here

The pair walked together, greeting the townsfolk as they walked. They met with Kaeda at the supposed entrance. The entrance did not have a gate. Instead, it had a dome, a barrier of sorts that identifies everyone using their mana as identification. This restricted intruders and eliminated the need for a security guard.Bookmark here

Nobaru and Eri met with Kaeda. She wore an orange coloured dress that matched her eyes and complimented her auburn hair.Bookmark here

"Hey guys!" she shouted as she ran towards them smiling. Nobaru was speechless when he saw her. He felt time slow down. He stared at her.Bookmark here

"What's up?" asked Kaeda, confused "Is there something on my face?"Bookmark here

Eri smiled. She understood the situation and watched as the moment unfolded.Bookmark here

Kaeda took time to register those words, then turned red "T-thanks..." she stammered. Immediately, she regained her poise "Let's go! Shall we?"Bookmark here

The other two nodded and followed her and finally, they entered the school itself.Bookmark here

As they entered the dome, they felt like something just passed through them, like a ghost or a scanner.Bookmark here

"This is weird." said Eri "Feels like something is crawling in me."Bookmark here

"Must be the dome," said Kaeda.Bookmark here

"As uncomfortable as it is, you will get used to it," said Nobaru.Bookmark here

The three of them finally entered the school.Bookmark here

What the three of them saw was amazing. Inside the clear, while halls of the building were students of different races and ages, talking and laughing together. The hallways were long, large and filled with people. Suddenly there was an announcement. A female voice;Bookmark here

Nobaru noticed a sign on the left, pointing to a room in the corner of the hall. It said "Gymnasium"Bookmark here

The trio walked towards the door of the gymnasium. They were nervous but excited too.Bookmark here

The gym was huge. Half the size of a soccer field. Kids of different races were practising weapons and magic. A ware-tiger, half transformed, charged with a pair of hunting knives and a menacing look, towards an elf who sidestepped and knocked him out with the butt of his sword. They saw dwarves fighting with battleaxes and mages shooting magic at golems that regenerate. Finally, they noticed a bunch of nervous-looking kids in a line, waiting for someone, the instructor probably. The three of them walked towards the group.Bookmark here

As they walked, they noticed a werewolf with a smile on his face. He walked towards them as a look of recognition passed his face. He transformed into his human form as he walked. He was as tall as Nobaru, with a decent build. The werewolf that was now human had black hair and eyes as dark coloured as the night sky.Bookmark here

"You must be Miya Nobaru." he said, "The boy who can do chantless magic."Bookmark here

At the mention of his name, the room fell into silence. All eyes were on them.Bookmark here

The wolf/person extended his hand "Nice to meet you. I'm Hugo. It's an honour."Bookmark here

'This guy reminds me of myself." thought Nobaru 'In my past life though.'Bookmark here

"Strong grip." said Hugo "But honestly, by no means, I'm trying to mock you, but, you don't look that strong so I doubt your strength."Bookmark here

"Looks don't determine strength, my friend." said Nobaru "I'm as strong as the people say unless they are exaggerating."Bookmark here

Hugo laughed, "Let us see then." He looked at Kaeda and said, "You...look familiar."Bookmark here

Kaeda's face showed confusion "Really?" she asked, "Because I think this is the first time I'm meeting you."Bookmark here

"Kaeda." she said with a smile "Nice to meet you."Bookmark here

Finally, moments later, the bell signalled the instructor's arrival. A tall heavily built man with a serious expression came in and motioned the group to stand in single file.Bookmark here

"All right you guys!" he shouted. He had an intimidating voice "I'm your weapons instructor, Ige Tsuneo. I'll teach you to use weapons and also the magic type you have the most affinity with, meaning the spell you can use most effectively. Since mages have a limited amount of mana in them, melee combat is equally important. Don't think mages don't have to pick up a sword in their lives. Some of you may already have weapons but those who don't can get your orders placed from the armoury.Bookmark here

The test consists of three parts. First, is the endurance test, which will be in the form of a race of sorts. The second is a test to check your strength in terms of magic. The third is to test your healing magic. So for the first test, you have to take a single lap starting from here, then around a 900-metre long field, then back here. I'll record who reaches the finish when."Bookmark here

A few groans could be heard. Probably because there were a lazy bunch of kids in the group. Immediately, the instructor caught them.Bookmark here

"You guys." he said, "If you want to be in here, get rid of that crappy, lazy attitude."Bookmark here

'I like this coach already.' thought Nobaru, smiling to himself.Bookmark here

A few minutes later, everyone was on the track. It was a long round track made of clayey soil. The surroundings resembled a greek amphitheatre.Bookmark here

Nobaru looked at his peers, who were nervous, either because of the situation they were in or because of the coach himself. Nobaru, who had seen people like this in the army he was in, was the former. He concluded that despite how he is, Mr Ige just wanted the students to be strong and thinks that being strict is sometimes necessary. So hence, the coach was the opposite of what everyone else thought he was.Bookmark here

"Alright guys!" said the coach "As soon as y'all reach the finish, it will be recorded in my database. So now all of you go on three. One...two... and three!"Bookmark here

Everyone started running. Nobaru discovered that he had innate physical stamina and endurance. Maybe some traits he developed because of his past life were in him in his current life as well. Many of the others sprinted ahead, desperate to finish it. Nobaru figured that they were desperate to finish this quickly and had the "let's-get-this-over-with" attitude. But soon, they will tire out. Bookmark here

He grinned to himself as he ran at a slow pace. But then he noticed Kaeda and Eri beside him. They were thinking the same thing. He looked behind him, he noticed Hugo, his legs in werewolf mode, behind them. He was thinking of letting them sprint ahead and then he will lead. But Nobaru won't let him. He went back till he was facing Hugo. Eri and Kaeda followed.Bookmark here

Surely people did get tired. Soon, many were on the ground, crawling.Bookmark here

'That was faster than I had anticipated.' thought Nobaru 'Anyways, that's good.'Bookmark here

And Nobaru took off. Kaeda, Eri and Hugo followed. By the time the rest were overtaken, they realised what they should've done. Nobaru reached first, Kaeda second, Hugo third and Eri fourth. Nobaru then stretched himself, smiling.Bookmark here

"It seems we had the same thoughts." he said "Great going guys!"Bookmark here

"Thanks!" said Kaeda "I saw you running slowly and I realised what you were doing. So I just followed."Bookmark here

"This was just my thoughts." said Hugo "Anyways. You are more athletic than you look. And decisive too." Then he closed his eyes and said "Mana Sense!" Almost immediately, his face showed shock. "Y-you." he said "You have a giant mana pool. Alright, I am convinced. That you are the child prodigy who discovered a way to do chantless magic. And now...I proclaim you my rival!" He said it as simple as that, with a wide grin.Bookmark here

Nobaru was surprised. But finally, he smiled. "Alright!" he said, as he extended his hand for a fist bump. Hugo took it. Kaeda and Eri looked left out. Nobaru noticed that and smiled.Bookmark here

"What are you both waiting for looking like that?" asked Nobaru "Of course I won't forget you guys. Join in!"Bookmark here

Kaeda and Eri looked at him and smiled. They took the invite and fist-bumped each other. The instructor Mr Ige clapped the four on their backs. "You four noticed those desperate sprints and predicted what would happen. Smart thinking. And Nobaru, you have amazing stamina. Good job guys! Straight A's"Bookmark here

Everyone surrounded them and showered them with compliments. Some showed surprised expressions seeing Nobaru in the group (considering his rising popularity).Bookmark here

"Alright guys!" said Mr Ige "It's not over yet. The next one's where the main stuff happens. A test to check your mana. Be ready and give it your all!"Bookmark here 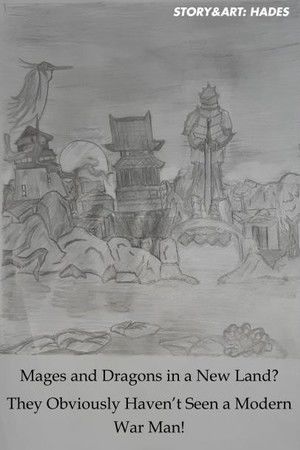 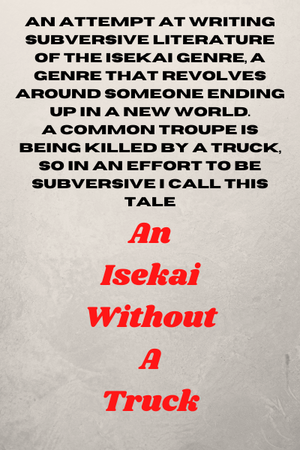 An Isekai Without a Truck