Isn’t it strange how there’s always one player in the hero’s group who has the role of a Shopkeeper? Haven’t you ever wondered who, in a world of endless possibilities, would ever choose to play the mundane role of a Shopkeeper? …That would be me, Yuu Watanabe. Unknown to most of my customers, when I’m not playing Utopia Online, I’m just an ordinary Japanese highschool student.Bookmark here

Our class had recently studied Schrödinger’s Cat, a thought-experiment invented by quantum theorist Erwin Schrödinger. Supposedly coined as somewhat of a joke, the experiment assumes that a cat is left inside a closed box that contains a flask of poison. If the flask breaks, the cat will probably die, but without any way to observe the inside of the box, it is impossible to tell when the cat will die. Under such circumstances, would it be fair to say that the cat is simultaneously both dead and alive at the same time? The answer, in case you were wondering, is no.Bookmark here

From my usual seat, I looked up at the catgirl who had just barged into my shop. Her claws were sharp and she had a knife at the ready attached to her belt. I could tell that she meant business.Bookmark here

“Level 350, huh? I don’t get many high-Level folks around here, unless one counts a certain Princess... How can I help you, Ma’am?”Bookmark here

She hissed, reaching for her knife and vanishing right before my eyes.Bookmark here

“How odd,” I murmured, “Where’d that catgirl run off to?”Bookmark here

As I spoke, I felt the cold metal of a small object rub against my neck. Looking down, I saw the Therianthrope’s clawed hand holding her knife dangerously close to my throat.Bookmark here

“Nyaa~ I’m behind you, ” she jeered.Bookmark here

“H-hey! Be careful with that knife,” I stammered, “E-even if this is just a game, it’d still r-really hurt if you sliced my neck off, Ma’am!”Bookmark here

She scowled, digging the knife further into my skin, but not enough to draw blood.Bookmark here

“Urgh,” ~Schrödinger~ sighed as he threw his arms up in the air, allowing me to escape from his grasp. “It’s a freakin’ tunic! Why does everyone think that it’s a damn dress?!”Bookmark here

“You’d better hope not,” he said, licking his blade menacingly, “Or else you’re gonna end up sleeping with the fishes…”Bookmark here

~Schrödinger~ glided around the room in a swivel chair that he had removed from his inventory. It was hard to believe that this was the same boy who had held me at knifepoint mere moments ago. I had asked him what he wanted to buy, but he didn’t give me an answer. He said something about 'getting to know me better first', whatever that meant.Bookmark here

Well, if he wanted to get to know me, I guess I had to initiate a conversation. Not that that bothered me, a hotheaded fellow like him probably had a few good stories to tell…Bookmark here

“So,” I began, “Do you have any interesting tales to share with me? A recent Quest, perhaps… Or maybe something from your personal-life?”Bookmark here

Instantly shot down. Still, I refused to give up that easily.Bookmark here

“Your name. It’s a reference to the Schrödinger’s Cat thought-experiment, right?”Bookmark here

“Eh, what’s it to ya?”Bookmark here

This was getting annoying. Was I even going to get any sort of conversation out of this kid? I cleared my throat and tried again.Bookmark here

“Earlier, it appeared as if you had vanished before you appeared behind me. How’d you accomplish that?”Bookmark here

~Schrödinger~’s ears pricked up as he leapt off his chair.Bookmark here

“Oh, that?” he asked, “I suppose I could tell you that… Or I could show you?”Bookmark here

And with that, he disappeared right in front of me.Bookmark here

“What do you think, Shopkeep?” a voice echoed throughout the shop, “Pretty impressive trick, huh?”Bookmark here

“~Schrödinger~, is that you? Where did you go?”Bookmark here

Out of nowhere, a knife flew out of thin air! I ducked, narrowly avoiding the blade as it lodged itself into one of the shop’s walls. I opened up my inventory, removing a sword.Bookmark here

"Wh-what the Hell are you doing?!"Bookmark here

“Heh, heh,” a voice laughed, “Cats love to play with their prey…”Bookmark here

“I don’t know where you are, but you’d better stay back,” I warned him, nervously swinging the sword in front of me, “The things I can’t cut down with my sword are next to none!”Bookmark here

“You asked earlier if my character was named after Schrödinger’s Cat. It’s a rather fitting moniker, as I’m sure you’ll agree,” he taunted. “My so-called ‘dress’ is equipped with an Invisibility Skill! In this state where I cannot be observed, am I dead or alive? …Or perhaps I am both at the same time?”Bookmark here

I looked around, trying to track the direction that the voice was coming from. In the shadows, I saw something glistening in the darkness – The blade of a knife.Bookmark here

“Ha… Haha… Hahahahaha!” I chuckled like a madman.Bookmark here

“The answer to your question is obvious,” I stated, “You are clearly dead, ~Schrödinger~!”Bookmark here

Without hesitation, I threw my sword forward into the darkness, being rewarded with the satisfying yelp of a defeated catboy, as well as some juicy Experience Points. I watched as the cream blond Therianthrope crawled out of the shadows and collapsed onto the floor, his body visible once more.Bookmark here

“Stop squirming, ~Schrödinger~! It will hurt less if you stay still!”Bookmark here

To a passerby, his yelps and moans might have been misinterpreted as something else. It certainly didn’t help that he was currently lying naked atop my counter (sans a pair of pawpad-print boxer shorts), but I was merely attending to my customer’s wounds.Bookmark here

“That should do the job,” I smiled, tightening the final bandage around his rather skinny body.Bookmark here

“I still can’t believe that you beat me,” he sulked.Bookmark here

“Don’t beat yourself up,” I said, “I haven’t had to fight another player in years. That was an intense workout.”Bookmark here

“Heh,” the Therianthrope smirked, “Since you managed to defeat me, I guess you’ve earned my trust.”Bookmark here

“Glad to hear it,” I beamed, shaking his hand.Bookmark here

“So then, Shopkeep… I’m gonna let you in on a secret…”Bookmark here

~Schrödinger~ sat up and leaned in close to me, whispering into one of my Elf ears. “I’m going to be the first player to take down the Demon King,” he grinned.Bookmark here

“The Demon King?! But that’s impossible,” I gasped, “No player has even seen the Demon King before!”Bookmark here

“Nyaa~! I know that, dummy! But someone has to do it,” he winked, “So that’s why I came here!”Bookmark here

“Oh? And how am I going to help you with that?”Bookmark here

“I need a weapon,” he explained, “Do you think that knives alone will be enough to defeat the strongest monster in the game?”Bookmark here

“Probably not,” I replied matter-of-factly, “So what kind of weapon do you want?”Bookmark here

The feline purred, placing a large bag of Gold onto my desk.Bookmark here

“I want… a bazooka.”Bookmark here

~Schrödinger~ admired his knew bazooka as I stood at the shop's entranceway.Bookmark here

“With my Invisibility Skill and this bazooka, the Demon King won’t stand a chance! He won’t even know what hit him!”Bookmark here

“Once you defeat the Demon King,” I began,  “Are you going to share the reward with the rest of your Guild?”Bookmark here

“Nyaa~? A Guild? Why would someone as powerful as me need a stupid Guild?”Bookmark here

“Wait, you’re not a member of a Guild?” I asked, completely dumbfounded, “A lot of players would kill to have someone like you in their Guild!”Bookmark here

“Yeah, but what would I have to gain from that?”Bookmark here

“If you had teammates, it would probably be easier for you take down the Demon King.”Bookmark here

~Schrödinger~’s ears twitched, a devilish smiling forming on his avatar’s face as he left the Fantasy Shoppe.Bookmark here

“Hehehe… That’s not such a bad idea, Shopkeep…”Bookmark here

I looked over at ~Schrödinger~’s swivel chair, he must have forgotten to bring it with him. I sat down on it, spinning around aimlessly as I pondered something – Would ~Schrödinger~ actually find the Demon King? And, if he did, would he actually be able to defeat him with just an Invisibility Skill and a bazooka, or would ~Schrödinger~ be the one to perish? Maybe he’d already found the Demon King in the short amount of time since he had departed from the shop? Without any way to observe the catboy, there was no way for me to determine his fate. Under such circumstances, would it be fair to say that ~Schrödinger~ is simultaneously both dead and alive at the same time?Bookmark here

The answer, in case you were wondering, is no.Bookmark here 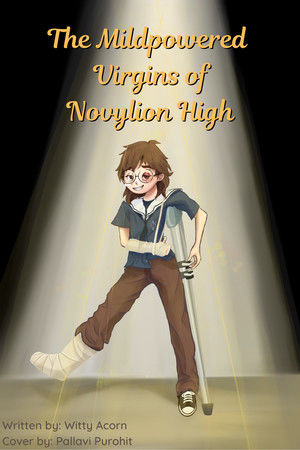