I Once Believed The Sun Was A Legend

My legs carried me down the busy, bustling streets. People were doing their daily errands. The usual. Be it either jogging, shopping, going to work or school. Whether on foot or huddled in their vehicles.Bookmark here

That was how things looked under normal circumstances. Now everyone was distracted. A human disturbed the rumbling streets. He was trudging his way through the sidewalk. And that person was...Bookmark here

Kids pointed their fingers, whispering to each other. Adults made way for me to pass. Passersby twisted their necks just to get a glimpse, bumping into one another in the process. Disgust was littered across most of their faces. Others were amused or curious.Bookmark here

It was because of my skin color.Bookmark here

My light bronze skin, to be exact. It wasn’t my fault that I looked this way. But I didn’t blame them either; everyone in Underground had pale white skin. People saw me as an abnormality in this society. And I didn’t like it. No. I hated it. In worst case scenarios, I got physically abused. But having no other choice, I was used to this sort of hostile act. Bookmark here

I pulled up my black hood, dug my hands in my pockets, and hurried my pace. I didn’t want to displease their poor little eyes.Bookmark here

As I snaked my way through the streets, my mind wandered to Underground. This wretched nation. Dim, cold, and damp. A place where ‘the sky’ was engulfed by meteorites, as history claimed to have happened over seven centuries ago. They said that this ‘catastrophe’ covered half of the earth’s atmosphere for unknown reasons, which caused a blockage to the rays of something called ‘the sun’. How and why? No one had a clear answer to that question. But it was known for a fact that only humans roamed this part of the earth.Bookmark here

After turning into an alleyway, I came to a halt, placing my feet on one of many puddles, away from the intense gazes inflicted upon me. Slowly, I looked up, shielding my eyes from the nearby lights. I barely made out a few crevices, which mapped out the dark, rocky sky. It was already too dark. But the lights scattered on each and every building made it almost impossible to spot a thing.Bookmark here

I resumed my pace, and my head continued its pondering.Bookmark here

What about the other half of ‘the earth’, some people asked. Of course, Underground’s authorities, books, and history already had a myth to that question. They said that on the other half of the earth, a place called The Heavens, people lived a completely different lifestyle. It was called The Heavens because of the abundance of ‘trees’ and ‘plants’ that it had; some green stuff that grew out of the ground to give us food and oxygen. But that only happened because of the sun, which not only brought light, but warmth. They also had somethings called a moon. Stars. Planets.Bookmark here

That sounds like a bunch of bullshit. A mere story to give children some sort of hope.Bookmark here

To back up my theory, no one was allowed to go to The Heavens. And they were very strict about it.Bookmark here

But that was not the major change that happened. It was said that as plants and creatures became extinct, some people started having some peculiar side effects, which was later called, Sukira.Bookmark here

Or a superpower, if you may…Bookmark here

Simply put, it’s powers of those extinct creatures, or what they were special at. People who have it weren’t rare, but they weren’t common either.Bookmark here

Again, this is completely professed. There’s no evidence that Sukiras were not a thing at one part in history.Bookmark here

I walked into a small flower shop. Relaxing music was playing, and the fragrant, refreshing smell invaded my nostrils. On either side, cans were placed on light wooden shelves, each containing different types of flowers: Carnations, roses, irises. Every one of them supposedly came from The Heavens.Bookmark here

An old man was behind the counter, and, seeing me coming in, he placed a canned daisy on the counter. He knew what I wanted. I was a frequent customer of his. I paid him, took it, and left, continuing towards my destination.Bookmark here

These daisies... my mom always liked them. They were nice. Simple. But now, she was in the hospital. In a coma. Because of a stroke.Bookmark here

The flower shop was already close to the hospital, so it only took me a few steps to enter the massive, glassy building. The reception was right at the entrance, but I ignored it, just like always. Walking past it, I headed straight to the 3rd floor.Bookmark here

I stopped in front of my mom’s door. Room 314, it was. I took a deep breath; I always got emotional when I visited her.Bookmark here

I knocked before I went in. Not that someone would’ve answered. Just a habit of mine.Bookmark here

Although, I do hope she answers one day.Bookmark here

I took in the view of the room, and it was... depressing. Curtains were covering the view from outside, making this place very gloomy. It smelled like hospital, and the beeping of the machines was the only thing to be heard. Bookmark here

My mother was the same as I last saw her. She was covered with a white blanket pulled up to her neck, with tubes inserted into her nose...Bookmark here

I silently went ahead and replaced the old daisies with the new ones. It felt like a visit to her grave each and every time.Bookmark here

I grabbed a chair and sat next to her bed. Slowly, I glanced up to her. She had her shiny black locks going down her shoulders. Unlike me, and like everyone else, my mother had pale white skin. But I had her hair and dark blue eyes.Bookmark here

She’s just asleep, I told myself. Nothing to worry about. My hands distracted me by pulling a piece of paper out of my pocket. I glanced down at it.Bookmark here

A Way To The Heavens, the title read. A yearly recruitment to the sky, sponsored by the Underground government. A death wish for anyone who applied. But the government were generous to those whom were recruited, rewarding them with enough money and supplies to support them and their families for the rest of their lives. In addition to that, if the recruited survive, they get a chance to go to The Heavens.Bookmark here

Which I wasn’t interested in. I only wanted the money. That was the only way I could keep my mother alive.Bookmark here

I grabbed her hand from under the sheets, cupping it with both of my hands. With a bit of hesitation, I put it against my forehead, closing my eyes shut.Bookmark here

“Now, I know you wouldn’t allow me to do this, but it’s for your sake... No, it’s for my sake. I want you to live.” I said, taking a deep breath.Bookmark here

“I sold everything to keep you alive, Mom. House, jewelry. I currently live in our car. No one is hiring me because of, you know, how I look. I’m not blaming you though. But I am going to go up there, to the sky, Mom, to keep you alive. I know it’s dangerous. In fact, they say the chance of survival is just one percent.”Bookmark here

I smiled weakly as I imagined her scolding me for making such a ludicrous decision. But I would argue, it wasn’t. I wanted the only person who ever cared about me, the only person who never judged me by the way I looked, the person who gave me life and nourished me, to stay alive.Bookmark here

A tear slid down my cheek. I quickly wiped it away.Bookmark here

If the government recruited me, my mother would live. But they wouldn’t just accept anyone. It was required to have a Sukira to enroll.Bookmark here

Luckily, I had it.Bookmark here

I turned to leave.Bookmark here

“This will be my last visit, Mom, I'll see you again, when I come back.” I said, clenching my fists.Bookmark here

I will. After I come back, I thought.Bookmark here 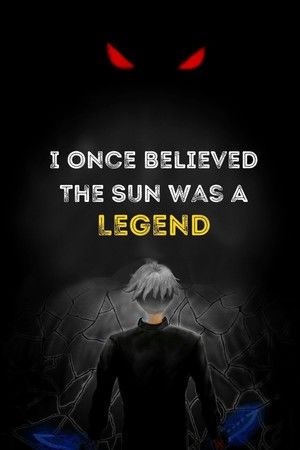 I Once Believed The Sun Was A Legend

Author:
Abraham B. A.