It was one morning like any other for young Boring Teen.

Boring Teen had just woken up a few hours ago to the sound of the construction workers outside his home.

It was summer vacation for him, and it was the best time of the year to just enjoy a day on the beach, talk with friends, visit family, or, really, anything else. Even playing videogames or watching anime would have been fine.

From the very moment he woke up, he had already decided where his day would be spent.

He would once again choose to throw away whatever remained of his humanity, for he would dive deep into hell exactly like he had been doing since a fateful day a few weeks prior.

That hell, that place forbidden to man and only inhabited by both gods and devils, was none other than…

A group chat born from the darkest of abysses, from the most wicked mind to ever exist.

Boring Teen took one device from his endless supply of old phones, and opened a certain app on it.

That app was where The Hive was located.

He was fully prepared for what was to come.

He entered The Hive, and just as he did, he managed to gather enough courage to post one single message.

A fraction of a second later, all the screen was filled with tens of answers to BT’s message, all of them consisting of varying shapes of the sentence ‘Good Morning’. Who knew that the English language could be so versatile?

BT: “Hello people! I’ve woken up to this chat again! I’ll keep saying it like it’s something new when, in reality, I’ve been doing this for three weeks now!”

This second message was not received with as much hype as the previous one, which came to demonstrate that humans truly have very short attention spans.

The first to answer was none other than Tomboy Lover, a fully grown man who dedicated his life to overexerting himself writing and displaying way too much affection for fictional characters which fit the ‘tomboy’ archetype. He had gone to such lengths as to get a ‘real tomboy GF’ or whatever that translated to in real men’s English.

His message was something along the lines of “Go away to read my chapter!” and a very mildly funny reaction image, screenshot from some anime.

Even if The Hive was Hell on Earth, even if no mere mortal should have ever put a single foot into that place, it still had a purpose other than just creating monsters. It was the meeting point for authors, readers and artists of a certain web novel platform, and so everyone’s biggest priority seemed to be to get others to read their story instead of actually writing it. Like all things should be, it was perfectly balanced.

After Tomboy Lover had left his message, a woman named Porl was next in line.

She was a complete mystery, for nobody knew what kind of force had led her to use more than two emojis or acronyms in the same sentence, in a consistent way. Other than that, she was a very wholesome person with some questionable stylistic writing choices, such as the one mentioned above.

Nobody really knew what QWQ or OTL meant, but everyone pretended they did in order to keep their sanity intact.

With those brief interactions, Boring Teen had successfully entered The Hive once again. It was still 7:40 in the morning, and that meant that there was still a full day ahead of him to, once again, regret every life decision that had led him to that very point. 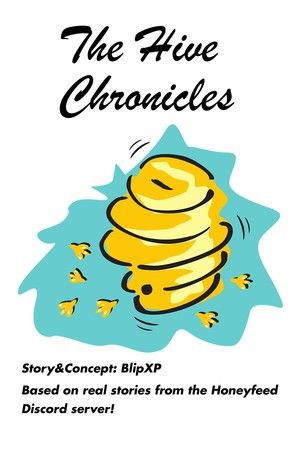