Virgil came riding up on a horse he had bribed the stablemaster to get. It was a strong beast of tawny color and calm disposition. The wind made it startle and throw its head. It snorted and stomped its hooves, refusing to progress till the merchant gouged his heels into its flanks and forced it on.Bookmark here

The merchant found nothing on the wind, his sense of smell long since eroded by snuff addiction. He forced the horse onwards against its instincts until he crested the last hill between town and the battlefield. His eyes were not enfeebled and what he saw made him pull up his horse and stare.Bookmark here

The scene couldn’t be called a cemetery. The bodies would have had to be buried, not merely beneath markers. A field of crucifixions surrounded me, the ground broken and tattered as though by artillery bombardment. The Order of the Broken Concordant had been eviscerated and sacrificed. Their bodies laid struck to the ground by blades of twisted mirror-steel. The world that reflected back around me was not this one, it was the muddy abyss of the diadem awash with the mud of death.Bookmark here

“Mark? Amaranth?” Virgil called out. He had dismounted his horse, who would go no further, and picked his way over the streams of blood. He scanned the carnage, making his way to the center. He found my armor before he found me; bits and pieces of steel glossy black with electric burns. It had been struck off of me one piece at a time by Amaranth’s frantic attacks.Bookmark here

I wasn’t the one to respond. The gurgled choke of blood from Amaranth’s throat drew him in to us. The Holy Lance of Throne didn’t die easily, even with both hands struck off and Ascalon stuck beside me.Bookmark here

He and I sat opposite each other. Me, cross-legged and nearly barren of my clothes; him, held standing by mirror-steel blades piercing his bloody armor. His blood dripped to the ground. I dripped the end of a wine skin into my mouth. I couldn’t taste it over the iron of my blood.Bookmark here

Virgil laughed, throwing his hands out to either side and turning as he stared at everything. “Mark! This is astounding. This, this is the power of a diadem. The power of kings, of armies, over life and death. You’ve bested a Holy Lance of Throne.”Bookmark here

“What do you mean? Look around you!”Bookmark here

“It’s not the power of life. It’s just death and keeping me alive to make more death,” I said, and gestured to where it had started.Bookmark here

Virgil didn’t need an explanation. Xon’s body was still there, on the edge of the worst destruction. He rubbed his chin, hung his head, and chose his words carefully. “Just like a king then, isn’t it? King’s can’t bring the dead back to life, not even with the Throne of the World beneath them. They can only sentence death. Did you make it out in one piece?”Bookmark here

“There are pieces of me here and there. I managed to keep my brain intact though, so close enough.”Bookmark here

Virgil stepped over to me and looked me over. “You can’t fight anymore, can you?” I shook my head. “This was only half of his army. They sounded horns for help.”Bookmark here

“Retreat too,” I corrected.Bookmark here

“Can’t say how many are coming then, but some will come to finish you off. If you can’t fight, you need to get out of here and rest. Once you can do… this again, then you can make your next move. Taking you back to Port Pelagus will be too risky; they’ll look for you there; but, I know some captains that can ferry you away.”Bookmark here

I licked my lips. I was still parched. Virgil clasped his hand onto mine and helped me up. “I can’t avoid this war, can I? The other diadem holders will come for me as long as I have it, and the other Holy Lances will come for revenge even if I don’t have it,” I said, gesturing back towards the well, back towards the old hideout.Bookmark here

Virgil took my arm over his shoulder and gave Amaranth one scrutinizing glare. The blades created from the diadem had punctured his lungs; he wouldn’t survive or even speak. “No, you can’t avoid it completely. With the right allies though, the Lances can be suppressed and the diadem passed off. Me for example.”Bookmark here

“You’re not getting it,” I stated, and he grinned. Bookmark here

“Wouldn’t want it even if you offered it. You might be able to befriend another diadem holder though. You might survive by handing it off instead of dying with it. Good people don’t seem to end up with them very often though, if history is anything to go by.”Bookmark here

“I don’t want to ever again be at someone else’s mercy, for them to decide at their whim whether I live or die. Never again.”Bookmark here

He helped me limp back to the well in silence and drew up water for me. I gulped it down till my stomach hurt, and then I went to that spot of dirt. When I brushed through what I had thought was animal bedding, my fingers struck leather. Xon’s notebook emerged into my hands and I couldn’t stop the tears as I held it to my chest.Bookmark here

After I had my moment, and when both of us could hear distant hooves, Virgil pulled me back to my feet. I could walk more easily. The power of the diadem seemed little more than vapors within me; just enough to fortify my blood. All the violence, all the death I had wrought to fuel it, had been consumed as fast as I had gathered it. Restoring my body, slaying the soldiers, and killing Amaranth had wrung me dry and left me with nothing to show for it.Bookmark here

Virgil spoke about names and places, what I would need to do and how to get back in contact with him. I found my purse of silver spilled across the ground and fastened it back around my waist as he brought the horse back over. The saddlebags happened to have a raincoat in them, a long thing of waxed cotton, and I threw it on to cover myself. I couldn’t just head off though. I had one last thing to do.Bookmark here

Ascalon chittered with sparks of electricity as I approached it, like bristling thorns. I grabbed hold of it with a thick leather glove. The spirit didn’t contact me, didn’t suck me into her domain to chastise me. Whether that was by her choice, I couldn’t tell, but I knew I wouldn’t be able to wield the weapon. The spear sat heavy in my hand, the tip coated in my own blood. I had lost track of how many times it had ripped my flesh and broken my bones till the pain stopped registering in my mind. Still, I felt no enmity for it.Bookmark here

If things had played out differently, if I had made other choices, perhaps I could have risen up and replaced Amaranth one day. If I had taken his offer and not followed Charlie out to thieve. I would have time to ponder what-if’s later. I couldn’t go back and change anything, so I hefted the spear up over my shoulder and threw it.Bookmark here

Whether it was the strength of the diadem, or of Ascalon itself, it soared into the sky across Vichtstein and out of sight. All that lingered behind it was a trail of light and my aching shoulder.Bookmark here

Amaranth finally expired as I mounted the horse. I could feel the change inside me, the breath of life into the abyss of the diadem. The fact that I would have to see him again in there made my stomach knot.Bookmark here

“Right then, hit me,” Virgil said, patting the horse on the hind.Bookmark here

“Yeah, right across the brow and make it bloody. The army will be here any moment from now and I need to keep them talking long enough for my caravan to rescue me. I’ll tell them you robbed me. It’ll work out somehow,” the merchant said as he put his hands on his hips and turned his head aside. He planted his hands on his hips and clenched his jaw waiting for it.Bookmark here

The last thing I felt like doing after all that was hitting someone. The thought drained me and buried me with fatigue, but I did my best to shake it off. The only weapon I had, once again, was my rudis dagger, so I struck him across the brow with the pommel of it. He staggered with a shout of pain, hopping on one foot as he resisted the urge to dab at the wound. Bookmark here

“That was good, yup, that’ll do it. Go, go! Before they get here,” he said and puffed out his chest. The moment I prodded the horse and got it to trot away, he dove at the ground like he was trying to bury himself in the dirt. Bookmark here

The horse bolted to get away from the corpses, no concept in its mind that I was the one who had created them. It was happy to flee and get back on the road and carry me away from Vichtstein. I put the sun to my left and galloped towards Port Pelagus.Bookmark here

Trumpets blasted behind me, tooting out commands to the remaining forces of the Order. I didn’t know who tried to take control, but their command structure was in tatters and their leader dead. I wasn’t afraid of their pursuit, I was afraid of the dozens of men I had scattered to the fields; the deserters and cowards that had escaped. Bookmark here

Their watching eyes made my skin prickle as I urged the horse onward to put distance between me and them. They would know which direction I took, but I just had to stay ahead of them for long enough. I just had to run away faster than they could chase me.Bookmark here

I had to abandon Charlie and Neeka. He was too injured to run away and she was safer with him than with me. I prayed that Claire would protect them; that she would understand what had happened and why. Recovering Ascalon would be more pressing to them than finding me. Bookmark here

I couldn’t even tell them where I was going or how to find me. If they even wanted to seek me out, their only clues would be what we had already discussed. It just so happened that the ships in Port Pelagus could take me all the way to Dalvurnia, to the land of the Everflowing that Xon would never get to see.Bookmark here

“I’m sorry,” I sobbed, tears nearly blinding me as I rode on. It was the only thing I could do for pain inside my chest. I cried, and I kept going forward.Bookmark here 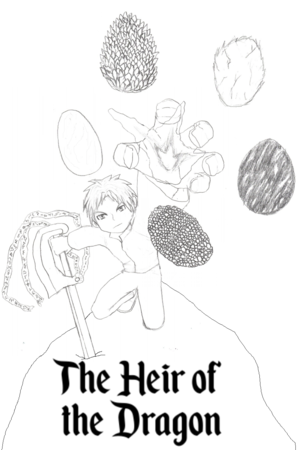