Someone that released his own dreams
The_Ice_Illusion.Bookmark here

A heavy rain was falling. The puddles in the soil reflected the sky at nightfall, colored grey. Despite being just July 10th, there was an abnormal cold. The walls in the alley were cracking, while a thin layer of ice expanded itself like a white shadow on the outside walls of the buildings that surrounded them.Bookmark here

Two people were there. One of them, lying on the ground, was crawling out of the alley, leaving a trace of blood behind him. His eyes covered in tears and his cold sweat creeping down his forehead denoted that he was trying to run away from something that endangered his life.Bookmark here

But, who was it? Who had the power to wound so seriously a sturdy man that, additionally, was armed? Why didn't the bullet penetrate the stomach of the other man? These questions just created a bigger confusion.Bookmark here

The other person, who hadn't move a muscle until now, advanced slowly. He wore a long cape with a hood that covered his face, giving him the appearance of an RPG mage. With each step, the ice on the walls expanded and cracked. The blood on the ground turned dark, drying with the extreme cold that apparently emanated from the hooded man.Bookmark here

When the man in the cape reached him, he felt a horrible chill. His nerves were inflammating due to the sudden temperature change, and his limbs were getting numb. Shivering, he turned and begged:Bookmark here

"That is exactly what I was expecting to hear", said the hooded man answered. "I need information about Skill-Out".Bookmark here

The man on the ground didn't answer. His silence was not due to the intense cold, but to the sudden fear that scaled up his spine.Bookmark here

"Is Skill-Out involved in the recent murders of Ability Users?", asked the man in the hood. "I don't have any wish of torturing you until I got the information, so you better speak now".Bookmark here

Aggressively, the caped man took the other by the neck of his shirt, pulling so strongly that the cloth ripped.Bookmark here

The hooded man let him go. A white frost mark remained in the shirt of the wounded man, who sat on the ground, defeated. How could he, a Level 0, defeat an Ability User with those magnificent ice powers?Bookmark here

The man in the cape nodded, expectant. A menacing aura in his person caused horror to anyone who looked at him.Bookmark here

"In Skil-Out w-we are always in disadvantage, y'know?", explained the guy, shivering. "You Ability Users a-always look at us Level 0s with revulsion in your eyes... W-We are tired of being Academy City's garbage!Bookmark here

Suddenly, the man threw a handful of dirt at the hooded man's eyes. Backing off to the surprise attack, rubbing his eyes so strongly that it looked like he was going to scratch his cornea.Bookmark here

A hurried noise indicated to him that his victim was running away. Nonetheless, being so close to obtaining information, he wasn't planning on giving up. With reddened eyes, he ran from the alley, while his cape waved on the wind.Bookmark here

He was able to see his prey stumbling with other people on the street. It wasn't too late yet, so it was normal to find the streets crowded even after sunset. There was one hour left before the curfew, so he had some extra time for the questioning.Bookmark here

Not caring about all the people in the surroundings, the caped man kicked the ground. The terrain, like obeying a mute order, cracked. As if having enormous underground pistons, the slabs of the ground raised and dropped again to their places, pushing to the air anyone who was over the stone plates. Several passersby dispersed abruptly, escaping of what, if not a lethal blow, definitely would break some bones.Bookmark here

The runaway, limping and covering his bleeding abdomen, raised after receiving the impact of one of the stone plates, falling violently to the ground with a mild "CRACK". The hooded, walking with a hurried pace, put his right foot over his victim and pressed. A hard, white layer extended over the wounded man's chest, parting from the point where his assailant's foot was placed. Struggling, he tried to move without success.Bookmark here

Nevertheless, just when the questioning was about to begin where they left, the aggressor received a kick in the face. The impact looked like it came from nowhere since someone couldn't attack him from the front without him noticing the threat. Another kick, this time in his left cheekbone, made him notice for a couple of seconds who was the one attacking him.Bookmark here

"You are under arrest!", yelled an acute voice. It sounded like a girl from elementary school or, at the most, middle school. "In the name of Judgment, surrender!"Bookmark here

The voice came from a girl who stood about two meters from him. How the hell did she move so fast?Bookmark here

The girl, of a small height (maybe a meter and a half), looked at him, showing her right sleeve, where a green armband showed that she belonged to the student disciplinary committee of Academy City. Her tawny-colored hair, tied in two pigtails, conferred her a doll-like appearance.Bookmark here

And that uniform she wore...Bookmark here

Then, suddenly, the hooded man realized who he was dealing with.Bookmark here

"You're from Tokiwadai, right?", he asked, trying to gain time. "I already heard of a student with the Teleport ability that belongs to Judgment. Komeko Chirei was her name?Bookmark here

"Is Kuroko Shirai", corrected the girl. "I have heard of you, too. You call yourself a 'Magician' that wanders around taking justice by your hand and altering order".Bookmark here

"I have my own reasons for it since neither Judgment nor Anti-Skill seems to pursue those murderers of Ability Users", said the Magician, and, for a moment, Shirai thought she saw a red glint in his eyes.Bookmark here

"That is not an excuse for attacking other students in such a cold-blooded way", answered Shirai, observing the runaway guy. "Anti-Skill and Judgment are working the best we can to solve these crimes. Not only you nearly killed this guy, but you also destroyed part of the street. Look at this disaster!"Bookmark here

The girl extended her right hand, pointing out the disordered stone slabs and the passersby that, terrified, observed from both sides of the street.Bookmark here

The sound of an engine attracted the gaze of the Magician. An armored truck, reinforced with heavy metal plates, arrived. The doors of the vehicle opened abruptly, revealing five soldiers with helmets and bulletproof vets. Shielding themselves behind riot shields, they pointed their guns directly at the criminal's body.Bookmark here

They were Anti-Skill, the organization in charge of controlling the insurgent Ability Users and fight organized crime. Alongside Judgment, they served as the most powerful anti-crime organization in Academy City.Bookmark here

A sixth person got off of the truck. She didn't wear a helmet, so her face was perfectly visible for those present. Her dark and long hair, extended beyond her waist, was tied into a ponytail that gave her an air of elegance and fearlessness. The woman took a megaphone and took it to her lips.Bookmark here

Then her face changed from her triumphant and self-confident expression into one of unnerving fear.Bookmark here

The caped man was laughing. It didn't sound like a laugh of happiness, nor like the laugh that covered rage.Bookmark here

It was the laugh of fear that emerged when someone is cornered.Bookmark here

"I can't believe it... The powerful Anti-Skills and this midget from Judgment decide to arrest the one that is doing their job for them. You should be the ones investigating these cases!"Bookmark here

"The problem is not what you do, but your savage methods", cried out Shirai, clenching her fists. "And what do you mean by 'midget'?!"Bookmark here

"You! The Skill-Out boy!", yelled, pointing his defenseless victim. "You are safe for now, but I assure you that, sooner or later, you Skill-Outs will fall for your crimes".Bookmark here

With a fast hand movement, the Magician created an ice wall between him and the soldiers that ruined his questioning. There was no choice. He will gather information at another time. Before Shirai could jump to him and take him to justice, before Anti-Skill could shoot down the ice wall, it exploded in a vapor cloud, expelling ice fragments like knives to his attackers. The cold dew created a mist screen that blocked everybody's vision.Bookmark here

By the moment it was dispelled, Ishiki Kōrihi, self-proclaimed Magician of Academy City, had vanished.Bookmark here 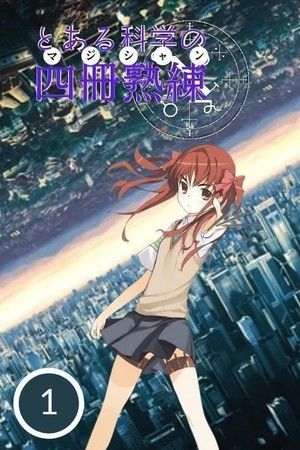