"What is it Noro? Don't have that sister of yours here to save you?"Bookmark here

The small group of boys around me laughed. What they found funny was beyond me. They had waited for me at a small park some ways away from our middle school. They stood like delinquents, blocking my path to make sure I couldn’t escape.Bookmark here

The kid standing before me with a smug grin was the school bully, Rayuki, but everyone knew him as Ray. His spiky hair and sharp eyes were almost painfully cliché for a school bully. His "intimidating" stance only made him look more like a kid trying to act tougher than he really was.Bookmark here

"Or what?" He pushed my shoulder.Bookmark here

I stumbled back but did nothing in retaliation. "What do you want?"Bookmark here

He slowly approached me and wrapped an arm around my shoulder. "Oh, it's nothing. I just want to be your friend." He said while tightening his grip around my arm. "Maybe you can put a good word for me with your sister too." He finished with a whisper.Bookmark here

Ah, I see. I thought to myself. Bookmark here

Ever since we entered middle school, Keiko, my twin sister, had begun to look much more feminine than before. Although she still had that tomboy look she’s had since we were children, she’d become attractive in the eyes of a lot of guys in class. She had rejected all of them of course which was probably why Ray was trying a different approach.Bookmark here

I glanced around, eventually catching the sight of the person I was waiting for. With a grin, I said, much louder, "Pathetic."Bookmark here

That instant, Ray's fist came launching towards my cheek. I dug my feet into the ground and stiffened my jaw. The impact sounded like a slap rather than a punch, and having felt next to no pain told me how weak this guy really was.Bookmark here

"You punch with your left, huh?"Bookmark here

"Wha—?" during his confusion, a fist came flying towards his chest, dropping him to the dirt.Bookmark here

Standing where he stood was a girl with short hair, wearing a sailor-style collared blouse and a skirt that reached her knees. Her muscles weren't too noticeable unless you paid attention, but the force behind her punch was impressive for any middle schooler. The evening sun made her caramel hair shine vibrantly.Bookmark here

"That was a good entrance, Keiko," I told the girl who still had her fist outstretched.Bookmark here

"All in a day's work!" She said with a smile.Bookmark here

I wouldn't usually pin these situations on my sister, but since Ray was trying to get to her through me, I found it most appropriate for her to deal with him. Thankfully, I knew I didn't have to worry about her being able to best him.Bookmark here

Keiko ruffled my hair as a mother would their child. "What would you do without your precious older sis?"Bookmark here

"Yeah, yeah, whatever." I took her rough hand off my head, ignoring the “older sis” part.Bookmark here

Still catching his breath, Ray sat up, cleaned the dirt off his face, and weakly said, "…You…brute…"Bookmark here

So now that he got humiliated, he starts to insult the girl he was trying to get close to. It was no wonder he didn't try a direct approach with her; he was undeniably awful.Bookmark here

Between the group of boys, there was one that shrunk into himself as if trying to avoid conflict. The other kids in his little group were finally able to pick their jaws off the floor and decided to chip in to the insults.Bookmark here

"Y-Yeah, you're not girly at all!"Bookmark here

"No wonder you can't get a boyfriend!"Bookmark here

Kind of ironic as their leader was trying to do precisely that. Still, I knew that those cheap childish insults wouldn't even scratch Keiko, and before long, I was proven right.Bookmark here

"Oh, do you guys want some too?" She aimed her fist at them, emanating an aura that was straight out of JoJo's. You could almost see the ground rumbling under her feet.Bookmark here

The kids squealed like chipmunks under her soldier-like tone. They broke out in a cold sweat while slowly backing away.Bookmark here

"For future reference, even if what you said was true, I'm not looking to get a boyfriend. All guys are the same—childish."Bookmark here

"Hey." I protested, having been hit with a stray shot.Bookmark here

With the way Ray's little group was behaving, I had no leg to stand on to oppose her statement.Bookmark here

Suddenly, Ray did something I never would've expected.Bookmark here

"Raa!" he roared as he swung his arm towards Keiko. His fist smacked straight onto her jaw.Bookmark here

A wave of gasps spread throughout the group. It seemed even his friends didn't expect Ray to act out this way.Bookmark here

The punch recoiled her head to the side and split the corner of her lip open. The moment the blood dripped a millimeter from the opening, I lost all sense of reason.Bookmark here

With speed faster than I could ever normally muster, I grabbed Ray by the throat and slammed him to the ground, kicking grass and dirt meters into the air. I put a knee to his chest and pressed down to make it harder for him to breathe. I lifted my fist and began swinging straight towards his face.Bookmark here

But before I was able to get my first hit in, someone grabbed me by the arm and stopped me.Bookmark here

"Calm down, Keizou." The voice of my sister brought back my reasoning.Bookmark here

Looking down at him with a clear mind, I saw the eyes filled with horror that belonged to the supposed school bully. Now he looked like nothing but a terrified little boy about to cry his eyes out at the sight of danger.Bookmark here

"You see." Keiko pointed at her lip. "It's just a scratch. I guess I put down my guard a little too early." She laughed.Bookmark here

Her worried smile helped me release Ray from the vice grip I held against his throat, my fingers printed in red. The other kids had already run away with their tails between their legs the moment I threw myself at him.Bookmark here

Before long, Ray too ran away as fast as possible with a tear and snot-filled face.Bookmark here

"Sorry, I guess I overreacted." I apologized to Keiko.Bookmark here

"Yeah you did!" She snapped. "You know I could've handled him myself!"Bookmark here

Tears welled up my eyes as I kept my gaze on the grass below. That was when two long arms wrapped around me in a motherly-like embrace.Bookmark here

"Thanks," Keiko whispered into my ear, her soft breath brushing against my hair.Bookmark here

I don't know why I was the one who needed comforting when she was the one who got hit, but that didn't stop the cascade of tears from dampening her white shirt.Bookmark here

I didn't know why that memory had randomly resurfaced. I wiped off my tears as I got out of bed for another day of high school.Bookmark here 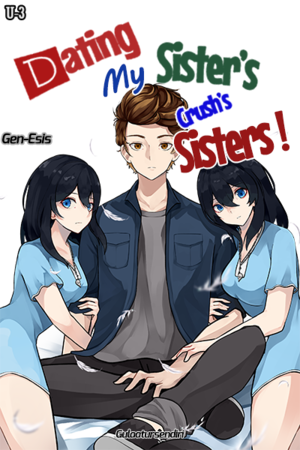