Closing the door of the cottage, Nakano spaces out as she admires the rustic building one last time, recalling back to the multiple not-so-great experiences and moments she had with Maruki.Bookmark here

"What are you doing over there, the clock's ticking" Maruki shouted in the distance. "Nothing!" She replies while running up to Maruki down the dirt path. Step by step the two walked, once again heading out a new adventure in the vast world.Bookmark here

Walking earnestly down the rocky path for a few hours with breaks in between, Nakano sighs "Hey shouldn't exploring be more fun?" "No action, no thrill.. where did all the monsters go..? even a goblin camp would do.."Bookmark here

"This area is ruled over by the Adel empire, with the adventurer guild covering every square inch of land, as the eye can see" Maruki claims "To even find a slime wandering about would be a miracle"Bookmark here

"Hey! There's one right there!" Nakano exclaims while she points. A medium sized goblin camp with multiple goblin troops around its perimeter. Nakano and Maruki peeking over a bush nearby. "This camp.. I'd say it'd at best a Grade D commission" Maruki says. "Hey, why don't you go take it down? I bet you're pretty rusty with all that time bedridden" Nakano repliesBookmark here

"It has been a long time since I've even thought of a spell.. sure, why not" Maruki marches over to the camp, he lifts his hand, palm foward and chants "O' great kindle, heed my calling, burn even ash to null, Grand Fireball!"Bookmark here

The goblins flinching from and started shielding themselves from the attack, but nothing came. Maruki and the goblin troops stood in confusion, Nakano viewing from the bush, bursted out laughing how idiotic he looked. The goblin troops starts charging at Maruki, while he shouts numerous different spells, "Blackfire! Meteor Break! Tidal Collapse!? Jewels of Light..?!??!! WHY ISN'T ANYTHING WORKING!!!"Bookmark here

After Maruki escaping the goblins, he sulks by himself under a tree trying to think of a plausible explanation why he can't cast any spells. "Is it because I don't have my staff? No.. that's not it.. Spell book..? No.. not that either.." Maruki murmuring to himself. Nakano still laughing from earlier, "AHAHAHAH!! hahahahah! ha..!! haaaaa.." calming down from laughing "Oh come on Maruki, cheer up!" ; "No, I don't think I can" He replies. "A Wizard like me.. unable to cast even the most basic of spells.. DO YOU UNDERSTAND HOW FRUSTRATING IT IS?!?!!"Bookmark here

"Geez calm down, well to be fair, those spells were pretty high graded.." "Hey, I know! what about trying easier spells?" Maruki looks at Nakano in disgust, "What like fireball?" as he says sarcastically "Mmhmm! Exactly!" Nakano replies holding a thumbs up.Bookmark here

Maruki having a severe disappointed face, "Haaaaaaa...." Maruki stands up lifting his palm foward "Fireball. There. See I can cast fireba-" as he looks, nothing came out. "What?? Fireball. Fireball..! Fireball! FIREBALL..?!!" Nakank lifts her hand and chants as well, "Fireball?" a burst of small flames shot out from her hand. Maruki distraughted, looking at Nakano. "You don't think, It's my mana gauge.. right?" Maruki asking extremely worried. "Well, Teru did say it was a form of mana poisoning.. So I guess that might be the case" Nakano replies. Bookmark here

"Theres no way..!" Maruki frantically searches his backpack. "It isn't.. here?" "Nakano.. where did you put my mana sphere..?" he asked. "What's a mana sphere?" she replied confused. "You know! the blue orb thing I always carry around, with small gold engravings on it??" Maruki getting exceedingly worried. "You didn't pawn it off right..??!"Bookmark here

"OHHHH!! That old thing!" Maruki's expression lights up. "Yeah, it was your nightstand lamp back at the cottage!" Nakano says happily. The light in Maruki's eyes faded as despair took over, Nakano realising what she said, started trembling "NONONONONO WAIT, PLEASE DON'T GO- BA-" Maruki ultimately starts trekking back to the cottage after the near 5 hours of walking they did, to retrieve his mana orb, with Nakano crying along the way.Bookmark here

By the time they returned back to the cottage, night already fell long ago. Both of them, Tired, Depressed and one of them being sad, they called it a day and spent the night in the cottage. Next morning, both outside sitting in the field, Maruki lays his hand on the orb, and closes his eyes. Nakano helps read out his mana gauge count. "So what's my mana count?" Maruki asked confidently.  "5.." Nakano replied in a monotone. "Yeah 5.. and another 4 zeroes right? 50,000 right??" Maruki sweating profusely. "Nope, just 5" Maruki opens his eyes to witness a single digit number that's half of the amount a newborn commoner baby has.Bookmark here 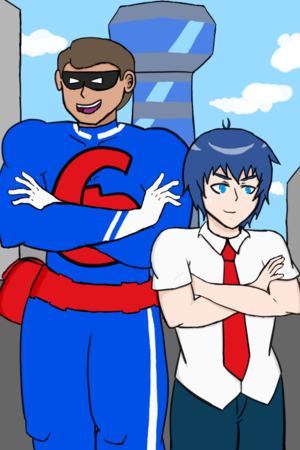