"Monkey's don't eat shit, they throw it at you." ALTaccounti

A boy was sitting on the bus by himself which was moving towards the Danshaku High School, it is said that it was funded by private investors. They wanted to make a top tier school that fit their needs without the government butting in. The school was solely made to get the most elite/skilled people to their private University in order to create the highest functioning individuals in Japanese society.

But all that didn't interest the boy called Naibu Henko in fact, he just wanted to get into the school his brother graduated from. The strange thing is at the time he still lived at home he told absolutely nothing about his experience there.

He started thinking as he looked around the bus as multiple adolescents his age were talking on cheating on some tests.

I guess people are trying to find their way around huh? The test is insanely hard after all, but I have studied the hardest I could so I can only hope for the best.

After 30 minutes the bus arrived they moved through a massive green forest until they reached the humongous open gate door. When Naibu and the rest left the transport vehicle, they saw the grey with a little gold school building with 3 buildings surrounding it, assuming they must be the dorms. A lady came up to the students.

"Everyone please follow me in order to take your entrance exams, make sure you have your ticket with you." The lady said.

Naibu checked his bag and had the ticket with him. It had a number 221 on it as that would probably show either somewhere online or on some scoreboard to see whenever he passed or not.

Everyone followed the Lady into the school building, that alone took 10 minutes.

Geez this school is massive, but for some reason it gives me goosebumps, eh I must probably just be nervous for the test, I have to calm down though this feeling won't help me with anything.

After walking through some grey mixed with white hallways they finally entered a big auditorium having room for at least 80 people.

"Alright everyone choose a seat, the exam will start within 5 minutes." The lady announced.

Naibu decided to sit in the corner of the auditorium. It had a huge window on the left side that let all the sunlight in. Thankfully it was morning and the sun wasn't strong on the eyes yet. Naibu looked at the other people as he kept hearing whispers.

They are probably going through their plans again, well I just have to do my best by doing my best!

Naibu pulled a pen eraser on the table and waited. After 5 minutes the lady announced that the test was going to begin. Everyone sat down, some kids being very nervous while others had smirks on their faces, but Naibu was relatively calm as stressing out only made it for oneself. When the teacher finished giving out the tests she went to sit at the desk in front of the auditorium.

"You have 2 hours to finish this test!"

With that said, the students started to work while the teacher started to read. The people who took the exam started to notice after 10 minutes that she wasn't looking up from the book. Some had suspicious looks on their faces while others were rubbing their hands. Naibu saw that but he quickly returned to his test.

Whatever they do is their responsibility, I just have to focus on my own battle!

Meanwhile Naibu was focusing on his test. The people around him threw cheat paper around while others held up their exam papers to do as if they were reading to let the seat behind them read their answers.

"10 minutes left!" The lady said while she looked into the class, she gave a slight smirk while going back to her book.

Darn it, I am still missing half of the answers! There is no way I can completely finish this in time!

After the 10 minutes passed the lady stood up from her desk and sat on it facing the with her book closed in hand.

"Time is up! But.. don't bother handing them in." The lady smiled.

A boy had a confused reaction.

"What do you mean by not handing them in?" He asked.

The lady opened up her book and turned it around, her smartphone was put inside a hollow cut space in the middle of the pages on the screen were various changing shots of the auditorium.

"What no way!" A girl reacted.

"Exactly there are various hidden cameras in this place, the test was to see who would be stupid enough to cheat on this exam, I think that you people would use such obvious elementary school tactics, truly despicable."

The lady clapped her hands.

"Everyone who cheated leaves the school grounds right now, if you still stand here after this announcement will lose their 2nd attempt to take the exam next year, meaning that you won't be able to ever attend this school, so don't make me look back on footage." The lady warned.

"Ah man!" One of the boys shouted and left the auditorium, others quickly followed suit.

"There is someone in the hall that will navigate you out of the building, have a nice trip and until next time." The lady smiled.

She started to count the students left.

"Only 15 huh? Lesser then normal, seems that you kids get more idiotic every year. Anyways congratulations everyone here made it through the entrance exam, but before you go I would like to say something."

Some students went from smiling and cheering to a questioning face while others just smirked, as if they already knew something which the rest had no idea of.

"If everyone made the exam fairly the 20 highest scores would pass, but this year that pretty much never happened due to the high cheating rate. Do not think that I don't know what you know, where some of you are obvious about it, others are holding up a façade." She said with sharp eyes that sees through their souls.

All the students suddenly gained serious expression, except Naibu he was just confused.

What is she talking about?

"Anyways all of you can go now there is a person waiting in the hall for everyone here too. Be sure to check your mailbox as he will send you the next procedures regarding attending this school, now everyone have a nice weekend."

With that said the rest of the students left the auditorium, when Naibu was about to leave too the lady stopped him.

"I want to have a chat real quick."

"Okay sure..." Naibu replied walking back to the desk the lady was sitting on.

"To start off I noticed that you were the only person that took the exam seriously, meaning that you genuinely didn't know of the ridiculous failing rate due to the mentioned issue." The lady said.

"Well, that is true. Until I heard people on my way here about it, but to think so many people would do it is beyond me." Naibu replied.

"Unlike you, the 14 others that passed didn't write down a single word, as they did know about the rates, meaning they didn't study in order to make it to this school."

"Okay... good for them, but I just want to do things the fair way."

"Hmm you must be a very honest person and probably kind too, which is nice in a normal situation, but at this school could mean a very tough road ahead or even your complete downfall."

"Our idly chat has ended, move along now."

"Tell me what you meant by that." Naibu demanded.

"That is for me to know and you to find out." The lady said while she signaled with her hand to leave.

Naibu turned around without saying anything and moved towards the exit when the Lady said one final thing.

"I am curious how you will survive here, Mr Henko. Good luck because you need it!" The lady shouted.

She knows my name?!

Naibu shook his head and left the auditorium, it took him 30 minutes just to get out of the school grounds since the rest were already gone. It would take another hour for the next bus to come, but thankfully a man at the entrance was about to leave, saw Naibu and was nice enough to give him a ride home.

My first chapter everyone I hope nailed it in regards to giving COTE vibes lmao.

I hope all of you enjoyed it and until next time! 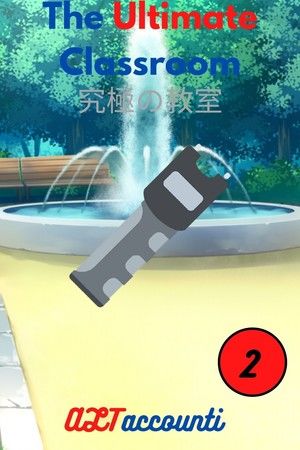