From the darkness emerged a white light. Flashes of red and black coalesced in front of me. A dull thud resonated in my eardrums. Bookmark here

[ The world reformed around me ]
Bookmark here

Cacophonous screams - sharp like the edge of a sword - they blasted my consciousness as I awoke from hazy blackness. Arms that weren't mine flailed around aimlessly, and my chest fluttered weakly as if it had deflated and was being desperately blown up again. Light seared through my cornea , and I noticed a scarlet figure leering over me from above, eyes agape as if they had seen a ghost.Bookmark here

A sensation rushed through my new body. Prickling skin, as if the wind had gnawed on my body, along with a barrage of pressures assaulting my chest. Wheeze in, wheeze out. I felt my lips unfurl, as the deafening screams continued to resonate everywhere. Was it me? Was I screaming? Perhaps it was obvious.
Bookmark here

I pried my eyelids open, and a scorching sensation shot through the whites of my eyes. I felt my brain crackling, yet the wheezing didn't stop. Wheeze in, wheeze out. Cry.Bookmark here

I saw another figure. It was close, but far enough that I could see its whole body. A second figure, wearing black and white for some reason, and a complexion I couldn't determine. They seemed to be checking some sort of device. I couldn't tell what colour it was. Everything was so... blurry.
Bookmark here

I felt a clutch at my chest, and my vision cleared slightly. A sonorous voice rang out from above, but I could not determine the speech's contents. It did not sound like a language I knew, but then again, I was no polyglot. It continued to play, and I felt pressures under my behind. Something began to cradle me back and forth, at a stable speed. That same voice arose once more not long after. It repeated the same nonsensical phrases. It sounded somewhat raspy - as if the propagator of the voice tapered off their breath as they spoke.Bookmark here

I could see not more than a few inches in front of me with any sort of clarity. The rocking motions continued. Back and forth. Back and forth. I could breathe a little better now, but still, lights flashed around me, my heart thumped endlessly. I craned my neck to catch vision of the source, the source of the nonsensical sounds.Bookmark here

My neck felt weak, yet I continued to lift it higher. My arms looked charred - but I couldn't concern myself with that. A mucus seemed to drip from above - viscous, thick and gooey. As my gaze inched upwards I saw the tip of some sort of appendage. It appeared a dark jade green, and the appendage itself had protrusions on one side only.
Bookmark here

Curious, my neck craned further. It started to tremble, as more of this appendage came into view. Then they seemed to multiply. Further on they seemed to merge into some sort of root area.
Bookmark here

My eyes fixed onto the owner of the dark jade appendages.Bookmark here

The tentacled monster had its gaze squared solely on me. I felt an unending sense of dread. Horror coursed throughout me. I could only wheeze, and cry, and wheeze, and breathe, and wheeze -- and cry.Bookmark here

It stopped 'speaking'. It was speaking in tongues, whatever it was. It continued to glare directly into my eyes. Irises of pale magenta, and a skewed, formless pupil. It stared. It stared at me.Bookmark here

My heartbeat that had once felt like a jackhammer had been muted. The only thing I could now hear was the ringing of tinnitus and the blood that pulsated meekly throughout my joints. Was this divine retribution for being a shitty human? Have I been abducted by aliens? What the fuck?
Bookmark here

It continued to stare. Formless pupils sinking into my mind from just a glance. I could never forget this if I tried to. Yet something was evidently wrong.Bookmark here

I could sense affection from those formless pupils -- somehow.
Bookmark here 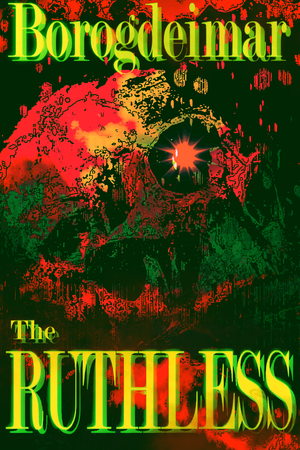