The Boy and the Nine Tailed Spirit

“I don't see it as madness. I only see it as a way of helping everyone as misguided as it may be”.Bookmark here

“Hey kid come here I got something for ya!”. The stall owner waves over the boy walking down the street and he happily runs over crossing paths of many of the busy people on their way to work. Many of the faces are recognizable as this is a spot the boy usually wanders day to day. Some even wave to the boy or pat him on the back as he runs by.Bookmark here

“Mr. Jean! How have you been? Is the store doing ok?” The boy says after crossing the busy street and making his way to the stall.Bookmark here

“Yeah, everything is ok now the spirit services said they would deal with the cleanup after the attack the only thing I’m waiting for now is a new hover engine for my car.” Mr. Jean points to his car that is in pieces that are currently being worked on by someone. He then turns his attention away and grabs something from behind the counter. “Enough about that look I got your favorite in!” The boy redirects his attention from the cars flying above and picks up the book and starts flipping through it with wide eyes. After a few moments, he sadly puts it down and looks back at the shopkeeper. Bookmark here

“Sorry Mr. Jean I don't have the money right now for it but I’ll—.” The shopkeeper cuts the boy off. He grabs the book off of the table full of comics. He hands him the book again and puts his finger to his lips, shushing the boy in a funny way. Bookmark here

“Don't worry Yasu, This ones on me.” The boy jumps around in excitement; this is the first volume of the series to be released and he's one of the first ones to get his hands on a copy. Bookmark here

“Thank you so much Mr.Jean I owe you big time!” Bookmark here

“Don't worry about it, you bring me enough business as is.” Yasu is a boy without any family. One day he sort of just showed up in an ally nearby. I found him lying unconscious one night after locking up the store and brought him inside. He says he cant remember much of the 18 years of his past. The most he can remember is that this busy city was once his home. The spirit services said there is no sign of a spirit tampering with his memories so there is nothing they can do. Now he spends most of his days wandering the streets of the city picking up any work he can just to get by. Sometimes even for free, that is just the kind of person he is. In the end, he doesn’t have a home and spends his nights anywhere he can get comfortable without being kicked out. In a city that looks like it was plucked out of a science fiction movie, you always got to be working, or eventually it will suck you under. Like it’s done to many others. It’s just a shame it had to happen to such a good kid. Bookmark here

“Hey, by the way, does that necklace you wear always glow like that?” The boy looks down in confusion at the gem sealed around his neck. This is the last piece of his family that he has left. The one and the only thing he woke up with that night. It's glowing a faint blue color with purple swirling around it. It sounds weird to say but it looks almost as if it’s agitated.Bookmark here

“Weird I know it reacts with aether sometimes but I've never seen it glow purple before.” Bookmark here

“I know a lot of things react to aether nowadays but I’ve never seen a crystal do that—” The shopkeeper stops midsentence and takes a few steps back. He’s frozen in fear.Bookmark here

“Mr. Jean? You ok it looks like you’ve seen a—” The boy starts coughing violently. His chest starts to run cold. He looks down to see a spear made of solid aether sticking straight through his chest. The necklace now flashing and oddly enough jumping around as if it’s again agitated. His hearing starts to fade out to ringing. Yasu drops to the floor. He can’t move, all the strength draining is from his body. The only other thing he can hear is the spirit disaster sirens screaming throughout the city. The aether spear dissolves and he lets out a painful cough. The crimson red pool growing under his chest. The once busy street turns into a mass panic. People that were once off to their long day of work now running in all different directions. Others are getting into any car they can find before they can leave the ground. Any cars that were already in the sky speed past until there is none left around. The boy reaches out to the shopkeeper but oldy enough it doesn't seem to be the sight of the blood that's frightening the shopkeeper, no it's the boy. The humanoid-looking spirit turns to the boy laying on the ground who is still holding onto consciousness. The metal shackle around its neck glowing brighter as it nears him. It drifts over and stops a few inches from the boy's face. This spirit looks oddly familiar. It reaches for the necklace grabbing at it with two fingers. The gem starts to glow a bright purple and sears the hand of the spirit. The chain melts and all that's left is a ring of purple fire where the chain once was. The purple slowly sputters and fades to a blue flame. The odd thing is the fire doesn't seem to affect the boy. The spirit disaster team finally arrives. About 20 or so cars come down from the sky and land with the sound of scraping metal on concrete. The spirit turns and starts throwing its aether spears. Most of the force of able to get their aether shields up in time before the spears hit but others weren’t so lucky. The spears that missed the force went stabbing into the ground, some into the cars. One of the forces lowers his shield and throws a small spherical-looking object at the spirit. It rolls across the ground. The boy on the edge of losing consciousness looks up at the ball. “A.A.G”. The small ball lets off a bright blue flash enclosing the spirit and the boy in the blue sphere. The boy passes out and the spirit dematerializes. Bookmark here 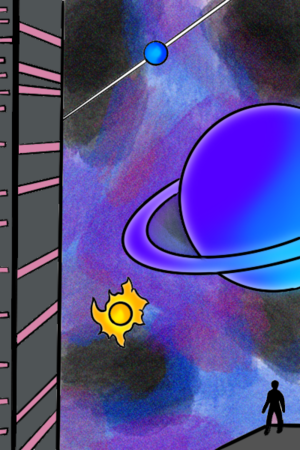 The Boy and the Nine Tailed Spirit