Chapter 0: The Time Before the World fell Asleep – Cold

The mountains afar and the forest on its foot were enshrouded in the darkness of the night. The stars above the sky are like sparkling diamonds, making one want to touch them. Bookmark here

The woman standing on the balcony wearing a white long dress that fit perfectly, showing the curves of her body, her snow white hair draped on her back, melding to her snow white dress, reached out her hand to the sky. Atop her head, adorned by the sparkling diamonds in the sky, is her crown. Her sparkling crown adorned her white hair that’s like a fine silk. Her skin is fair and smooth, her eyes are big and round, and her irises are like sapphires, shining brightly when the lights inside the castle strike them, blanketed by her long and white eyelashes. Her nose is high and her lips are red and full. She is the lovely princess of Elhasa Kingdom. Bookmark here

“Your Highness.” A deep male voice called behind her. Bookmark here

Princess Alf turned and saw a handsome knight wearing a red armor standing by the door. He has a perfectly chiseled face, thick and long brows, dark red eyes and flaming red hair. “Phyros.” Alf called and smiled at him, her voice gentle and sweet. Bookmark here

The man’s rigid face eased as he bowed before her then offered his hand to her. Alf’s beautiful face brightened and she took his hand. Phyros led her to the ball room and they walked towards the center of the dance floor. Bookmark here

Alf placed her hands on the man’s broad and steady shoulder, then looked at his face. Phyros put his hand on her back and his other hand took her hand placed on his right shoulder. Then, the music started and everybody resumed dancing. It was the king’s 100th birthday. The festive atmosphere set up the bright mood on the people’s face. This atmosphere lasted until it was broken by a scream. Bookmark here

Alf’s eyes went wide in horror when she saw at the throne her father was killed. The sword pierced his chest and bright red blood flowed out. Bookmark here

“FATHER!!!” she screamed as she reached out her hand and tried to run towards her father who fell on the floor, his blood staining the sparkling floor with its bright red color. Bookmark here

The music died and was replaced by screams and panicked cries of the people as they immediately fled in all directions, running for their life. Bookmark here

“FATHER!!!” Alf cried, her tears wetting her beautiful face. She struggled from Phyros’ hold, who now’s face is grave as his eyes searched the hall, looking for the other guardians. Bookmark here

“Your Highness!” Rayvan, the head of the royal knights, called as he and the other guardians ran with him, heading towards the princess and Phyros’ direction. Bookmark here

A devious laugh suddenly filled the hall as the brightly lit torches illuminating the hall became dim until it turned green. Bookmark here

“What happened?! How can the king be killed?” Phyros, the son of the sun and a phoenix, immediately asked Rayvan and the others as he pacified Alf who is crying in his arms. Bookmark here

The guardians’ face is grave. Even they didn’t know what just happened and all they know is that the king already died. “We don’t know. His Majesty was just laughing with his subjects earlier when we heard the princess’ cry.” Tet, a deity, explained, his face dark. His golden hair crackling with electricity. Bookmark here

“The magic is stronger than mine.” Vira answered, her hands raised as she felt the magic fluctuation around. Her dark red dress is hugging her body like her second skin. “It is dark magic. Only dark magic can overpower the light.” She said and sighed. She is a light wizard and an alchemist. Bookmark here

“Somebody created a separate space.” Seph, a blind noble, said, his dull gray eyes looked at the throne where the king was earlier. Now the king’s body is lying on the floor. However, they can’t go near him because a space barrier was erected around the throne. Bookmark here

“The throne was replaced with a replica.” Arlen, a thief, said, his long and slender fingers are twitching. “Could it be His Majesty was poisoned before he was stabbed?” he asked. Bookmark here

“I can’t sense the spirits.” Griezel said, her dainty face filled with melancholy. She is a fairy elf. Bookmark here

“If only I can turn back the time…” Thos said through his gritted teeth, her knuckles turned white in anger. Bookmark here

“Who is it?” Rayvan asked when a shadow suddenly swept past them. He immediately drew his sword, pointing to the shadow’s direction. Bookmark here

“It doesn’t matter who I am.” A voice said, echoing around the place. “Your king is now dead.” He said and laughed. Bookmark here

Alf sobbed in grief, her hands holding Phyros’ arms tight. Her body is shaking in fear and anger. “What do you want?!” she asked and turned to where the voice is coming from. Bookmark here

Then, all the lights were extinguished, making the palace covered in darkness. Phyros lit up his hand for them to see each other. “Secure the princess’ safety!” he ordered as he held Alf’s hand tight, assuring her. “Let’s find a place to hide the princess – “ he said, his voice still hasn’t fell when that voice again can be heard. Bookmark here

“You have nowhere to run! Nowhere to hide! A price will be paid!” the voice said, seething in anger and madness. Bookmark here

However, just as they neared it, the doors, along with the windows, all closed in succession. They are trapped inside. The home where she grew up became a cage that enclosed Alf. Her heart can’t help but beat faster as it was slowly eaten by fear. “Phyros…” she called, her voice small and weak. Bookmark here

“Alf…?” Phyros called when he suddenly felt his hand that was held by the princess suddenly became cold. If it had not by his fire, his hand would’ve already became an ice block. “Alf!” he called as he hugged her tight, warming her body that’s started to go cold. Bookmark here

“What do we do?” Tet asked after he failed opening the door by his lightning. Bookmark here

“The spirits do not respond…” Griezel said, her ethereal face embraced by sadness. Bookmark here

“We have to get the princess to a safe place!” Rayvan said, his voice firm. He tried manipulating the ground but there’s no change. He turned to Seph. “Seph. Transport the princess far away here. Phyros, you keep her safe. We’ll stay here to find and kill the enemy. We must avenge His Majesty!” he said, seething in rage. Bookmark here

“Yes!” the guardians answered and nodded as they made a circle and Alf, Phyros and Seph in the middle. Bookmark here

“Now I can cut the space here.” Seph said. With the guardians’ presence acting as their barrier, the space around his hand distorted. “Your Highness. Phyros. Go.” He turned and nodded to Alf and Phyros. Bookmark here

“Make sure she is safe.” Thos said. Bookmark here

“I will.” Phyros answered. Carrying Alf, he jumped inside the space created by Seph. Bookmark here

“You will never see her again.” The voice suddenly said. Bookmark here

They all sharply turned when they heard the voice is near. “Where is it – “ they said as they looked around. Bookmark here

It wasn’t known where and when did they turn but their eyes suddenly went wide in horror and disbelief of what they saw. They were about to speak and assume their stance. However, before they could move, they felt their breath was slowly extinguished. Bookmark here

Death awaits them inside this darkness. Bookmark here

Outside the forest, by the lake. Bookmark here

The still water reflected the starry dark sky. It was a beautiful sight. However, this beauty unfortunately can’t be appreciated when the space near it fluctuated until it was ripped. Bookmark here

Alf fell on her knees the moment they went out the space. “Father…” she called in grief, her hands clutching her painful chest. Bookmark here

“Your Highness…” Phyros called. “Alf.” He knelt down beside her and hugged her tight in his arms. “Don’t be afraid. I’m here. I won’t leave you. We won’t leave you – “ he said as he held her tighter. Bookmark here

“How touching.” A voice said, the same voice from the castle earlier. “Too bad they already left.” He said, referring to the guardians. Bookmark here

Phyros sharply turned. The voice is coming from the forest and is now approaching to where they are. He hid Alf behind him as he manifested a flaming sword in his hand. “Show yourself!” he yelled as he swung his sword and a ball of fire flew inside the forest. The fire lit the inside of the forest where it passed, however there was no one in sight. Bookmark here

“Alright.” The voice said coming from nowhere. A figure slowly came out of the forest, it was unknown how. The moon illuminated the surroundings, making the newcomer reveal himself. Bookmark here

Phyros stared at him in horror. “Seph?!” he exclaimed, disbelief in his voice. “You betrayed us!” he gnashed his teeth in anger as he threw the flaming sword to Seph. Bookmark here

Seph waved his hand and a space opened, eating the flaming sword inside. Suddenly, the space next to Phyros’ leg opened and the flaming sword flew out and pierced his leg. Phyros screamed in pain as he fell on his leg. Bookmark here

Seph laughed. “You guardians are all useless.” He said, his smile mocking as he walked towards them. Bookmark here

“You are a guardian yourself!” Phyros said as he forced to stand and protected Alf from behind him. “You are the princess’ guardian. You vowed to protect her!” he told him. Bookmark here

But his words were ignored. “The others are all dead. It’s your turn next.” Seph told Phyros. “Then – “ he said and looked at Alf. However, his smile froze as his eyes slowly widened in horror. Bookmark here

Phyros felt his heart was eaten by fear. He sharply turned to Alf and felt his heart go cold when he saw her standing behind him, her feet were frozen by ice. “Alf…” he called and immediately grabbed her hand. The ice is crawling from her feet up to her body. Phyros used his flames to thaw the ice but it doesn’t melt. His face paled as he held her hand tight and hugged her. “Alf… answer me – “ he called as he set his body aflame, trying to thaw the ice again. Bookmark here

“Pft – ahahahaha!” Seph laughed as he held his stomach. “She doomed herself!” he said and pointed Alf. “Ack – “ he cried when a flame flew inside his mouth. He turned to Phyros in horror as he felt the inside of his body started burning. “You – kah!” he coughed as he tried to spit out the flame but to no avail. He could only fell on the ground, hugging his body while he writhed in pain. Bookmark here

Phyros ignored him and turned to Alf who started to be frozen. “Alf…” he called, his voice soft as he held her cheek. Ice crawled to his flaming hand, putting out the fire. “Alf…” he called, yet no one will answer him. He smiled as he planted a kiss on her cold lips, then closed his eyes as the ice finally covered his body, still holding Alf. Bookmark here

The ice from the two figures crawled towards the ground, then covered the whole kingdom. Bookmark here 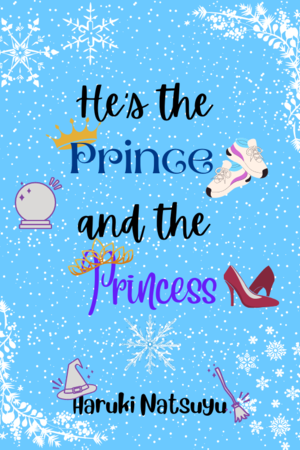