My sister’s long, golden hair, her pale white skin, her long fingers, her impeccable dress... they were all stained with blood as she laid on the kitchen floor, unmoving.Bookmark here

—Ah, is it weird to call someone beautiful when you’re twins?Bookmark here

It took me a long time to snap out of my own thoughts and realize what I’ve just done.Bookmark here

I didn’t mean to kill her, obviously. But I don't exactly remember how I did it. One moment we were arguing, and next thing I know, she's dead. Bookmark here

The problem now was getting rid of the body before anyone found us.Bookmark here

It took me awhile to move her away from the kitchen and onto the back door of our summer cabin. As I dragged her from the arms all the way to the ground outside, I glanced past the door and saw the trail of blood her body left behind on the wooden floor like some sort of giant snail, and couldn’t help but sigh.Bookmark here

“Even when you’re dead you cause nothing but problems, huh.”Bookmark here

I talked to her corpse to cut the tension between us, even if said tension was all in my head.Bookmark here

Unfortunately, I had no time to clean the floor. I had to make sure no one would find her first, then come back quickly and get rid of the rest of the evidence before our parents returned.Bookmark here

You wouldn’t think it just by looking at her, but she was heavier than an entire stack of firewood. I should know—as the boy, I was always the one they sent to bring in the logs for the hearth. They never made my sister do anything just because she’s a girl. It’s always been incredibly frustrating.Bookmark here

The cabin was surrounded by trees from every direction and our closest neighbors were at least a mile away and completely out of sight, so no one was around to watch me struggle or listen to my grunts as I kept dragging her over the damp soil, further and further into the woods.Bookmark here

Her hair and her dress had more than just blood on them after awhile—mostly mud and pieces of dry leaves all over, and as I kept walking backwards with nothing but my own labored breath to keep me company, I got surprisingly used to the image of her dead face in front of me.Bookmark here

Her slightly opened mouth, and her widely opened eyes.Bookmark here

After who knows how long, I arrived onto a section of the woods so thick with trees and dark with foliage and so eerily quiet it would scare even the bravest man (it’s me. I’m the bravest man. And I’m scared shitless).Bookmark here

I decided it was the perfect place to bury her.Bookmark here

I finally let go of her wrists to look for the best place for it, and a few steps ahead I found a nice, thick tree which looked slightly different than the others.Bookmark here

I don’t know much about trees or their types, but unlike the rest of them, which were mostly pine trees, this one had different leaves on it and a trunk so thick I probably couldn’t touch my arms together if I were to hug it. Not that I wanted to.Bookmark here

I don’t know why, but I felt like I had to touch it. I slowly placed my palm on its trunk and looked up.Bookmark here

As I did, a loud, sudden cold breeze howled from the north, starling me. I pulled my hand back and it was as if the wind had also stopped at the same time.Bookmark here

I scoffed, acting tough even though I had no audience. When I looked down at the ground I saw what looked like a molehill near the protruding roots of the tree, and suddenly I felt illuminated.Bookmark here

If there was a colony of rodents living under this tree, then that meant there was enough empty space down there to make it easier for someone with no digging experience like me to dig a sizable hole that’s big enough for a human. It was like a sign from above that this is where I was supposed to bury my sister. I grinned to myself.Bookmark here

First, I grabbed Alice’s wrists again and pulled her close to the tree.Bookmark here

And because I was too much of a dumbass and left in a hurry, I didn’t have a shovel or anything like that with me, so I had no choice but to dig with my hands.Bookmark here

It sucked—not just because kneeling down and digging with your hands stops being fun after you turn what, ten? That was five years ago for me. No. It sucked because I knew people would ask me where I’ve been if they saw me all dirty like that.Bookmark here

Not to mention if they found the bloody kitchen floor…or realized my sister was missing.Bookmark here

I was so caught up in my own thoughts, gradually getting more and more worried about my parents cutting their hiking trip short and returning to the cabin before sundown that my arm suddenly sinking down all the way to the elbow inside the dirt took me by surprise, bringing me back to reality.Bookmark here

I pulled my hand out quickly, leaning over the narrow hole my arm had just dug out. It was too dark to see inside, but I could tell it was deep.Bookmark here

Excited over this new discovery, I immediately started digging around the hole with more enthusiasm. The dirt around it was so soft and crumbled easily, very easily…Bookmark here

So perhaps I shouldn’t have been so surprised when the entire ground around me began to shake.Bookmark here

I thought it was an earthquake, so I stayed still and waited for it to pass...but that never happened.Bookmark here

Instead, the entire ground around me suddenly caved with a roar, and both me and Alice plummeted down the longest pitfall of our lives, with nothing but my helpless cry filling the air.Bookmark here

When we hit the ground, instead of one corpse, there were two.Bookmark here

...or so I thought, anyway.Bookmark here 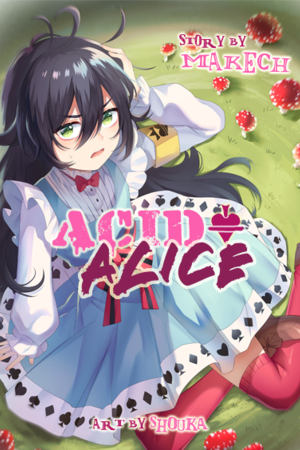