Is there a choice in this matter? I'll find a way, because this death is certainly not my fault. Bookmark here

The boy surrounded by nothing, not even himself, started to see beyond the fog. The blood stained ground that grounded him and the woman in white by his feet lying in the puddle. He heard the sound of footsteps come to a stop behind him and turned around slowly to point at himself, a katana in his other hand. Bookmark here

“How could you have done this?”Bookmark here

As if! The sword wielding boy was faced against a shadowy figure which he could only describe as ‘looking like me’ . He held his sword with bravery yet lacked the will to strike the figure. Instead, the figure struck him with something unknown hidden in the fog. He couldn’t fight, no… he didn’t want to keep fighting the same battles. Bookmark here

Again he was pierced with something he couldn’t define. Too tired and weak to fight, he fell to one knee. Why was he fighting anyway? Bookmark here

"It's all your fault…" were the last words said to him before his eyes closed to rest.Bookmark here

The sounds of the moving train filled the sleeping boy's ears. He was sitting by the window leaning slightly as he was dozing off more and more. His head leaned to the side a bit too much and he was struck awoken by the uncomfortable position. Bookmark here

"Agh…" the boy groaned and rubbed his neck yawning. He stood up to grab onto a nearby pole, first alone until his blurry vision started to fade then people started to fill the empty seats. The train's speakers came on and announced the stop.Bookmark here

That was his stop. Bookmark here

He took out his phone, flipping the top open to look at an old message detailing where he was going.
From Yamiko,
'Meet me outside Kashiwara station. I'll show you around town Tetsuya-san (*￣0￣*)ノ口 '
Sep 13Bookmark here

He closed his phone as the train came to a stop. The doors opened and the journey began. He walked out with his head held high and a grin on his face that showed his excitement for diving into the unknown.Bookmark here

The sun shined through the cloudy skies. The boy stepped out of the station with the flood of people and stepped to the side looking around for his caretaker. He looked down at his phone, staring at the message until he saw a strange shadow on the ground that grew in size. It was tall and sharp, long and imposing like a…Bookmark here

"..!" The boy turned around to see a purple haired lady. She waved unenthusiastically at him.Bookmark here

"You look lost… are you Hyde Tetsuya..?"Bookmark here

Hyde nodded. The purple haired lady grabbed Hyde's suitcase offering to take his luggage since there was still time for him to arrive at school. The choice was up to him and he took it, running off before she could give him instructions to the dormitory. “Guess I’ll just...text him again… Hyde huh? Why can’t I remember why he was given to me..?”Bookmark here

"...A new transfer student. Your seat is back there by the window." The male teacher pointed to the seat.Bookmark here

Hyde nodded and promptly walked and sat in his seat beside a red haired girl. Bookmark here

Hyde Tetsuya was his name. A 4th year student with long shaggy brown hair and blue eyes. He was dressed in Ibunroku Academy's uniform, a closed black gakuran over a white buttoned shirt and dark plaid green pants. The female uniform was also a gakuran and buttoned shirt but with a plaid green skirt. Bookmark here

This school wasn't well known by any means nowadays. It used to be a prestigious school but after the years passed it’s popularity started to decrease. Now it was incredibly average and dull so the school started to allow more average people here. However, Hyde was invited to come to this school due to his excellent grades but he couldn’t remember all the details about such things…Bookmark here

For some odd reason he couldn't remember much of the past as such why he was placed in Yamiko's care. And why did her shadow look like a dragon? He shook off the thoughts.Bookmark here

Hyde moved his eyes to inspect the students in his classroom. Many of the students snuck quick glances at him, especially the red haired girl that sat beside him who stood out among the many others with natural hair colors. Bookmark here

There were a few rushès, an animal eared species of human. Cat boys and girls were plentiful in his class, there were girls with rabbit ears sprouting from their heads, however there weren't any fox eared or wolf eared rushès. Those two were rare. But aside from their unique features they didn’t seem particularly interesting. Well, Hyde wanted to make the most of his last school year. He hoped for a fast day since he still had to find the dormitory he would be living in.Bookmark here

...the day flew by, better than Hyde expected. Bookmark here

Hyde held his phone which had all the instructions for getting used to the area, the dormitory, the rules, and other information that would be useful later. After traveling the small town a bit, he found the dormitory, a tall hotel looking building that stood beside other buildings almost the same height.Bookmark here

Hyde entered and looked around at the warm brown interior, a green couch in front of the TV placed near the wall, a table near the back meant for morning or late night dining and stairs that lead up to the upper floors. The sounds of a playing piano near the wall greeted his entrance and soon the lady playing it stopped.Bookmark here

The purple haired lady at the piano pushed away, sliding in her office chair from the piano to beside Hyde. Legs crossed and hands rested on her lap, she had a completely blank expression that switched to a friendly smile. She had short purple hair and dull purple eyes.Bookmark here

"Greetings Hyde Tetsuya. I am Yamiko Clotaire. The headmaster of this dorm...and all things detective." She moved her chair to the counter by the entrance and grabbed a clipboard then slid back to beside Hyde.Bookmark here

Hyde dropped a sweat seeing Yamiko carelessly toss the contract back to the counter. She pulled out a ring of keys from her pockets and picked out one to give to Hyde. “Room 8 on the second floor. I already placed your luggage in there...”Bookmark here

Hyde looked at the key which had his room number engraved on it. Luckily it was just on the second floor so walks in and out would be a breeze. Bookmark here

“..!” Hyde turned around to see the red haired girl enter. Her hair was short and held a black ribbon on the back of her head. She and Hyde glanced at each other, Hyde's neutral stare and the stranger's brown eyes full of interests. She smiled, "You must be the person moving in. This is awesome! I'm new here too."Bookmark here

Hyde listened to her ramblings until she held out her hand.Bookmark here

"I'm Mary Hitoshikawa, a 4th year." Mary's smile was so pure and innocent. Such a bubbly nature Hyde hasn't seen since middle school. He shook her hand and spoke his name.Bookmark here

"Hyde Tetsuya… that's a weird combination but my name isn't any better. It's quite the mouthful." Mary said, "Let's get along here on out! With the rest of the people living here too."Bookmark here

Yamiko pointed to the clipboard on the counter “Sign your name there. Your room will be…” she took out the ring of keys and pulled off a random one. “...room 14. Enjoy.” she handed Mary the key before siding back her chair to the piano.Bookmark here

“Ah thank you.” Mary nervously smiled at how quickly Yamiko handled the situation. Having seen enough and feeling tired, Hyde retreated to his room ending the beginning of something new.Bookmark here 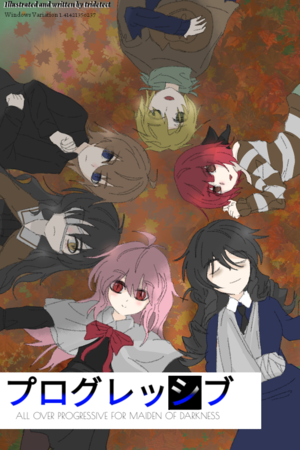