“Miss Gimmimanni, what is the meaning of this‽” an enraged man bellowed, shoving a newspaper in the face of his least-favorite employee.Bookmark here

Giovanna Gimmimanni – Fonni News Network’s self-proclaimed “intrepid reporter”. More like “insipid reporter”, one might think. Her reporting technique was one of falsehoods, irritations and exaggerations – a paparazzo of the highest degree. A swarm of mosquitos wearing a human face and a metaphorical trenchcoat. A parasite slurping up the lifeblood of fame and celebrity for whatever sensationalist article she wished to publish in her company’s periodical. A girl of no standing nor honor, with no sense of personal boundaries or others’ feelings, all Giovanna Gimmimanni cared about was having her article be the most overhyped piece of writing in any given edition of FNN’s newspaper.Bookmark here

Her boss furrowed his brow as he placed a palm on his forehead, letting out a loud, frustrated sigh. “What do I think‽” he asked, “I think this is a pile of escrementi!”Bookmark here

“You’d be lucky if any of these other half-wit reporters,” Giovanna began, swiftly motioning to the other employees who were typing up generic humdrum newspaper stories, “Could write an article even half as engaging as my brilliance!”Bookmark here

“Your ‘brilliance’ is defamation,” Don shouted, “You could get the company sued!”Bookmark here

“Oho,” Giovanna smirked as she stared across the room, making the other FNN employees really uncomfortable, “Are any of these joes lawyers? Hmm?”Bookmark here

“My brother is a lawyer,” one of the joes responded.Bookmark here

“Lawyer this,” Giovanna buzzed, running up to the joe and throwing him out of the umpteenth story window before proudly putting her hands on her hips. “Anyone else wanna sue me, huh‽”Bookmark here

Don put his face in his hands and let out another deep sigh. “That’s the fifth employee you’ve defenestrated this week…”Bookmark here

“Grazie,” Giovanna proudly winked, “Now then, if you’re done wasting my time, I’m gonna get out there and find my next sap, er, ‘interviewee’. Arrivederci!”Bookmark here

“Not so fast,” Don huffed, grabbing his disobedient employee by the collar of her white shirt, “I’m not letting you go out there to annoy another celebrity in the name of FNN again,” he continued, “Luckily, I know just the guy to keep you in check.”Bookmark here

“Oho,” Giovanna chuckled, “How bad can he be?”Bookmark here

Don walked over to his office door and wrapped his beefy fingers around the doorknob. “Giovanna Gimmimanni,” he began, “I’d like you to meet your new partner…” Don twisted the doorknob as a mass of white fur bolted out of his office and tackled Giovanna to the floor. “Galileo, heel!” the boss ordered.Bookmark here

Giovanna stared at the Volpino which was standing atop her chest. Galileo, as he was apparently named.Bookmark here

“It’s just some mangy mutt,” Giovanna scoffed, shoving the dog off her bosom, “How is this thing gonna ‘keep me in check’‽”Bookmark here

Giovanna jumped to her feet as she stared at Galileo in disbelief. “Why does your dog speak Italian‽”Bookmark here

“Because we’re in Italy, you dense paparazzo,” Don sighed.Bookmark here

Giovanna looked around the room. All the other members of FNN’s print staff were still typing away like normal. She stared back down at Galileo and gestured to him with both of her hands. “This mutt can talk,” the reporter screamed, “Aren’t ANY of you the least bit concerned about that‽”Bookmark here

“So can you,” Galileo panted, “What’s the big deal?”Bookmark here

Giovanna facepalmed as she gritted her teeth. “Ok, Leo,” she sighed, “You’re coming with me. I’ve got some reporting to do.” Giovanna grabbed the canine by his tail and threw him over her shoulder as she strutted to the nearest elevator. “Arrivederci, suckers!”Bookmark here

“I was talking to Galileo, you idiota!” the man yelled back as Giovanna and Galileo disappeared into the elevator, unprepared for whatever story they were about to report on.Bookmark here 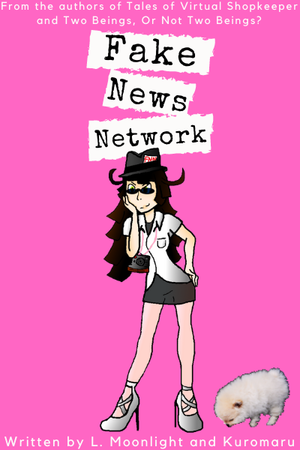