Tabula rasa or “blank-slate” theory – a hypothesis which states that individuals are born lacking what could be considered mind. That everything we think and know comes solely from the world around us, the people around us. Teachers, friends, family… An interesting line of thought, although many would be quick to dismiss it outright. Psychologists, geneticists, even this author… But, nevertheless, allow me to, just for a second, entertain the idea. That, perhaps, our personalities, our interests, our behavior, they could all be learned traits. What would happen if somebody was raised knowing nothing but evil? If somebody was made to know nothing but evil? Could that person be capable of learning goodness? Or would they be entirely and truly malformed for all eternity?Bookmark here

War is Hell. This was the saying that first lieutenant Francis Fibonacci recalled as he stared down at his wheelchair-bound legs. He had been paralyzed from the waist down after taking a hit on the field of battle earlier that afternoon. War is Hell…Bookmark here

Fibonacci scoffed. No. For him, war was nothing short of Heaven. No matter how many injuries he sustained, how many lives he took, the fame and glory made it all worth it in the end. But he couldn’t fight now. Not like this. If he went back to the battlefield in this state, the enemy would rip him to shreds. Which is why he was talking to the country’s top scientist, a non-binary individual by the name Yzaachi Jones. They were a pacifist. A nerd. Fibonacci’s total opposite. But Jones was as spineless as they were smart. When Fibonacci and his men broke into their lab guns blazing, they felt as if they had no choice but to follow the lieutenant’s orders.Bookmark here

“I want a robot,” Fibonacci had told them, “But not just any old piece of junk! This robot must be made for combat!”Bookmark here

Jones had tried to tell the soldiers that they wouldn’t make an android for fighting purposes, but Fibonacci’s gun made Jones an offer they couldn’t refuse. As Jones reluctantly started work on their newest robot at gunpoint, Fibonacci made it very clear what he wanted the machine to be capable of.Bookmark here

“Give that bot as many built-in weapons as you possibly can,” Fibonacci instructed, “I don’t want a single enemy left alive after dealing with our creation!”Bookmark here

After many hours of toiling against their will, Jones had completed their newest invention. An android loaded with many hidden weapons and programming based on interviews and autobiographies of countless famed soldiers and veterans. Designation: “R.O.D. – Robotic Offense Droid”. Fibonacci wheeled over to R.O.D. and looked it over, top to bottom. Its appearance was identical to that of an adult male human, from the black hair atop its head to the toenails on its feet.Bookmark here

“Jones, you’ve done it again!” Fibonacci smiled, slapping the scientist hard on their back. “I’ll see to it that you’re paid with a very handsome sum of cash.” Fibonacci turned back to R.O.D. and grinned from ear to ear. “Now, R.O.D., it’s time to win this war!”Bookmark here

Before long, R.O.D. had been deployed behind enemy lines. The armed forces had airdropped the robot down to the outskirts of their enemy’s capital city. As R.O.D. wandered into the city, it moved down everyone it came into contact with indiscriminately. R.O.D. had one purpose and one purpose only – winning the war and bringing glory to Francis Fibonacci and his country. Or at least it did, before encountering a schoolhouse.Bookmark here

Children were having fun during recess in the playground, under the watchful eye of their teacher Elivera Ts’Marten. R.O.D. took a seat on a nearby tree stump which was secluded by the shade of the trees and cover of the bushes, putting its weapons away and observing the schoolhouse careful and considerately. Were these people really enemies? And the woman… She made R.O.D. feel something. Something unfamiliar. Something unexpected. Something… lovely. The android watched on as Elivera called the children back inside to continue their lessons. R.O.D. was alone once more and free to resume its directive. Its right hand transformed into a high-tech laser gun as the robot stared down at it vacantly. It stood up and glanced back down the way it had came. Bodies lined the city streets. Innocent bodies. R.O.D. looked over its shoulder back to the education building. For some reason it was overcome with a new sense of purpose. A new mission. A new number one objective. “Don’t let those small lifeforms see these corpses.” R.O.D. bent over and picked up one of the bodies.Bookmark here

As night fell, R.O.D. stared at the nearby cityscape from atop the small hill it was standing on just outside the capital. Surrounding R.O.D. were tens of makeshift gravestones. The android had spent the rest of that evening giving its victims proper burials. The droid gave one last look over the hill as it wandered back into the city.Bookmark here

Somehow, the city suddenly looked more appealing to R.O.D. than when it had first marched through obliterating all in its wake. Automobiles slowly moving down the roads. Streetlights shining down on the robot. Couples walking the sidewalks hand-in-hand. These people were what caught R.O.D.’s eye the most. It was unsure why, but it pondered, “What if?”Bookmark here

“What if I had somebody to hold my hands?” R.O.D. muttered to itself.Bookmark here

As R.O.D. continued to walk on the pavements, it silently stared at the couples passing by. Not looking where it was going. Bumping into somebody.Bookmark here

“Ohoho my,” the woman R.O.D. had bumped into laughed, “You should watch where you’re going, Mister!”Bookmark here

R.O.D. felt its circuits overheating. Its face turned bright red as it offered its right hand to the woman, who gladly took it as R.O.D. helped her to her feet.Bookmark here

“Oh, uh,” the droid stammered, “I-I’m Rod,” it responded on the spot.Bookmark here

R.O.D. broke eye contact as it went back to observing the couples walking in the street. Holding hands. Placing their arms around each other’s shoulders. Kissing. Some even had children. Elivera followed the android’s gaze and put her hand on its shoulder.Bookmark here

“You quite enjoy people watching, huh?” she asked. “I saw you looking at some passersby earlier, so I just assumed,” she reasoned, as she noticed R.O.D.’s expression change at her first remark.Bookmark here

“I’m… lonely,” the robot responded without second thought, “I just… I was considering that it might be nice to have a…” it paused, “A friend.”Bookmark here

“You don’t have friends?” Elivera frowned empathetically. “I’ll be your friend,” she smiled wrapping her arms around R.O.D. as she gave the robot a compassionate hug.Bookmark here

Meanwhile, a napping Jones was awoken by a loud crash, as a group of soldiers knocked the lab door down and barged into the scientist’s work station.Bookmark here

“Have you heard any status report back from the robotic offense droid?!” Fibonacci demanded, as the procession of armed men stood to either side of the doorway, letting him wheel himself towards Jones.Bookmark here

“H-Huh?” Jones groaned, lifting their glasses away from their eyes and rubbing them tiredly. “Wasn’t the R.O.D. supposed to report back to you?”Bookmark here

“It WAS supposed to!” Fibonacci growled. “So then, why hasn’t it?!”Bookmark here

Jones hopped out of their chair and stood to attention. “Maybe it was destroyed?” the inventor suggested.Bookmark here

“Destroyed?!” the lieutenant barked, “I thought I asked you to create the most proficient combat android possible?! How could it be destroyed?!”Bookmark here

Fibonacci rolled his eyes. The lieutenant turned around and left the lab without a word as his men marched quickly behind him. Jones breathed a sigh of relief, putting their head back on their desk and drifting back asleep.Bookmark here

As the months passed, Fibonacci and the rest of the soldiers resigned to the fact that they’d never find out what happened to their robot. Meanwhile, R.O.D. and Elivera had only grown closer and closer. Hang-outs turned into dates. Sleepovers turned to sleeping together. Friends turned into lovers.Bookmark here

One day, as R.O.D. walked into a jewelry looking for an engagement ring, it suddenly stopped in its tracks. Before it proposed to Elivera, there was something it had to confess. All those missing people. Those family and friends left without their loved ones. R.O.D. knew that it had to confess. To not being human. To being a combat robot. To being a murderer. R.O.D. handed the money it had earned from its new job as a teaching assistant to the cashier, who in turn handed the android a diamond engagement ring.Bookmark here

“Hey, everyone,” a boy called out, running into the store and holding a newspaper above his head, “Did you hear? We won!”Bookmark here

“Won?” R.O.D. asked the boy who he recognized from the school, as it walked over and read the front page headline.Bookmark here

The war was over. R.O.D. smiled and breathed a sigh of relief. Maybe…Bookmark here

Maybe R.O.D. would confess another time? Now was the time for celebration. For cementing its new life of peace. Its new life with Elivera. R.O.D. held its head up high as it left the jewelry, ready for whatever the future held.Bookmark here 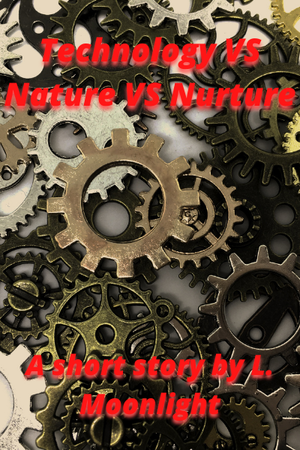