Lights Out on Christmas Day

On the eve of Christmas day, a holly-leaf glued itself gracefully onto an open, silver eye. And it was dry as hay.Bookmark here

Harolde’s entire face twitched—slightly. Had to stop himself. He couldn’t disappoint the family that had been ushered beside the shrinking line of stockings, hands joined and beady eyes staring politely, for a time and in manners that could only be called patience. A yellow chick (the painted one made of tin) pecked the digits forward.Bookmark here

At this moment they were huddled in front of a decorative green and red display, with him awkwardly at the back edge, frozen to the rug. Unblinking. Just listening. One of them with a leaf in the better half of his two eyes.Bookmark here

The mother must have caught Harolde’s sudden discomfort, for she turned her doughy head and offered him a warm smile, before returning her gaze to the box before them.Bookmark here

In vague guilt over her (gentlest) discovery of his distress, the elf’s smile kept upright and eyes widely open at the lens as he and the family of gingerbreads continued to wait in their spots. The contraption ticked steadily. Churned towards the last second of the process—the end. It was close.Bookmark here

Surer than a pansy in winter.Bookmark here

He almost forgot the minty dryness resting on his pupil. But it came back like dear golly—did it feel six centuries that the despicable sheet was stuck in his eye!Bookmark here

A perfectly good pair of silver eyes, Harolde might have added with a sniffle. Ones that could have done without some consistent means of assault from things like holly! (But alas, with its teeth in the pond, it was not to be.)Bookmark here

The elf thought to sigh. Just as instantly refused the motion.Bookmark here

The Buskins were a kind family (too kind!) and did not need to know further of his troubles. They were sure to insist on calling off the job, which he measured with edging pain they had stood on for a good half-hour or more, if they were to find he was quite unsettled.Bookmark here

He sniffed inwardly. Both were true.Bookmark here

Yet, jolly reindeers everywhere, what would he have done for a mug of warm cocoa to lightly steam and provide a little hydration to those growing deserts?Bookmark here

Nothing drastic, came the surprising answer, but the wait was nearly over.Bookmark here

The muffled whirring that had been coming from beneath the cover grew into a series of clacking which could just be heard over the hearth—at aching last, the end was near! No fraction of an errancy from one’s desired pose permitted.Bookmark here

The lids of Harolde’s eyes trembled, particularly the left one (he swore it would grow a blister on itself). Stopped for a bit (he thought of whether this would last). Almost buckled shut in the effort.Bookmark here

The little boy at the front of the group shifted his feet. A neck craned minutely. And then—Bookmark here

From the funnel came a definitive click followed by a flash of whizzing gears, announcing to them all: it was over.Bookmark here

The ring relaxed instantly, with many of their joints and baked limbs turned stiff, and Harolde gladly whisked the leaf not onto the ground, but onto the surface of an oak table by the wall. (This was so it accompanied the only other bit of fallen ceiling in sight. The cleaners much disliked having a shimmy more than their existing share of work.)Bookmark here

With a jiggle, the last stockings were unpegged from the wire.Bookmark here

As the owner of the building and residing firm (a pudgier man than the elf) appeared to convene with his departing customers, the elf went to take the golden apple of their efforts – an inky film formed in the tray of the machine – and slipped it into the signature envelope of the business. It was straightened, then sealed with a sticker.Bookmark here

While he did so, the remaining occupants by the door seemed deep in conversation. (What exactly they talked of, however, was as foreign to the elf as vinifera berry in stew.)Bookmark here

A chubby man uniformed cosily and with always the smiling eye, the owner had the permanent face of a merry man. And as he was of such mood, he chortled a merry chortle. The gingerbread on the other end of discussion nodded back. Continued with a deft mixture of gesturing and low mumbling.Bookmark here

They seemed to glance in the direction of the elf, but Harolde could not tell with certainty they did. The coal ovoids they had for their eyes rarely gave much away.Bookmark here

Turning back with the old jolly look in his cheeks, the owner translated concisely, “The Buskins would like one copy with that, Harolde.”Bookmark here

The elf removed the rectangle niftily, pressing it against one of the equally sized panels hanging in a set. What parts were blank faded into a blotchy quilt. From its liquidy state, the centre hardened, image in it gained increasing sharpness, and with similar speed the sheets were reslotted into the envelope. Handed to the family standing before the hallway.Bookmark here

“They say one of them is for you.”Bookmark here

Suddenly, their unblinking beads seemed greatly too much as he stood with eyes tingling once again, mulch paper package in his hands.Bookmark here

He wanted to dig. He wanted to crawl into the fireplace and dig—down past the basement, and far from those round eyes that seemed to shine evermore in the presence of a couple lit bulbs.Bookmark here

It was too bright it stung. If his pair of degrading eyes were left in the open with any further of a source of dryness (and doctor at long last given them the appraisal, ‘This time, lad, there’s no fo’seeable return!’) he would have to ask for leave. Permanently.Bookmark here

Pulling the copy slowly from the envelope, he passed the remainder to one of the Buskins, whom accepted with good grace. Murmured a grateful mumble.
Bookmark here

The smooth plastic stilled between his gloved fingers. When was the last time someone had asked to be in a photo with him? And he stopped. Thought.Bookmark here

There was nothing. (Except when the local milkman was taking a snap-photo marathon, and another time in his old neighbourhood when a committee was missing a look-a-like member to Harolde, given a sweater over his face.)Bookmark here

The scenes bubbling unwittingly from the memory of the elf fizzled. Dipped away, away. By the time they were gone, the gingerbreads had grabbed their bags and were taking a final survey around the lobby to spot any of their belongings they might be missing.Bookmark here

A zip and the father’s wallet closed with the photograph inside. (That one went into another bag.) And just like that, they were all packed and ready to go.Bookmark here

Hence the Buskin family waved goodbye to the elf. They piled through into the hallway, with little Jimmy lagging slightly behind—whom, in some pensive dilemma, was dragging the tips of his cracked legs along the carpet. Came to a complete stop. He turned fully to face Harolde and gave him one shy, but determined, nod. Then the boy hurried a few lost steps back to his parents.Bookmark here

And then the gingerbreads had gone, and the photographing store was empty.Bookmark here

(Of the last customers for the night. The employee and his employer were excepted.)Bookmark here

“A lovely family,” the plumper owner commented. The woollen beetle on his hat dangled to bob with his speech. “They’re sure to treasure their first picture with their photographer of two years.”Bookmark here

He drew in a thick, deliberate breath, as to then follow with another account.Bookmark here

“On this note, however, Harolde…”Bookmark here

His rodent-nosed slippers twisted at a certain angle, informing the elf they meant to close shop for the day. Right then.
Bookmark here

The lights dimmed, the fireplace snuffed, and then the two had retreated to the front of the store. A final cluster of bulbs which were still lit hung brightly from the ceiling. And Harolde saw: on the table was a gnome-sized gift bag adorned with a single, winding ribbon.Bookmark here

A gift for someone to open.Bookmark here

Having noticed an expectantly eager gaze from the elder between the elf and package, Harolde untied the long fabric. Some of the tissue fell away. It was a cylinder—a stout candle, melting wax speckled through with flecks the colour of lime. It smelled a little of Christmas firs, and holly.Bookmark here

“A little gift from the workplace to you,” the owner presented, with a twinkle in his eye. “You’ve worked hard this year.”Bookmark here

A more elaborate response working to express his feelings (whether they be emotional or relating to his health) escaped Harolde as the bag hovered on the counter. And so simply, he uttered, “Thank you, sir.”Bookmark here

A chuckle rang from the portly man, the song jovial all the way.Bookmark here

“Go home and get some rest. The Christmas Wheel will open on the night of new day, and you wouldn’t want to miss it – tucked in bed ready to sleep!”Bookmark here

Paper bag (which, along with the candle, now had the photograph gifted to him) resting safely in his arms, the hatless elf stepped, from the hearth, into the night. Closed shop for the holiday.Bookmark here

Not his holiday.
Bookmark here

His breath puffed visibly. It wasn’t cold—more of a lucky effect from the crystals embedded all through the slabs that paved the street. They were what kept the seasons at a constant. Never too hot. Never too cold. As today, and as always, the air of Bauble Lane was moderate.Bookmark here

As he walked his eyes were stinging somewhat, at the bulbs that hung fixed across the buildings. These buzzed a quiet hum. Glowed in different colours. He closed them for a bit, but, as always, this helped little.Bookmark here

The town was still on Christmas’ Eve. Beacons, jingles and a sleigh around the town wheel would soon begin their display to mark the beginning of the holiday. Wishes long-held would be granted. The gift of joy'd come swiftly.
Bookmark here

With this as the key, a remarkably sinister plan began to form in the mist—and Harolde set down the lane with a little more spring in his step.Bookmark here 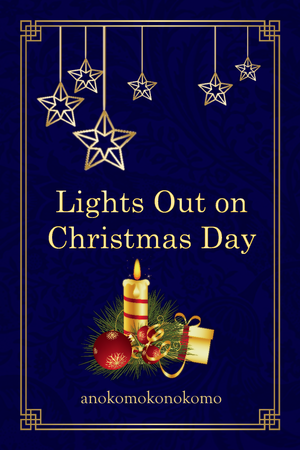 Lights Out on Christmas Day