A black-haired young girl stood in the dimly-lit hallway outside the principal’s office. She could hear her parents shouting at another classmates’ father while the principal tried to calm them all down. Tears ran down the girl’s cheeks like out-of-control rivers, her tear ducts busted dams. She just couldn’t understand it. Why were the grown-ups angry? She hadn’t done anything wrong! In fact, she was confident that what she had done was an act of selfless generosity. The girl glanced to her side, careful not to move her neck whatsoever, as the principal and a blond boy her age stepped out of the room.Bookmark here

“Hoo boy!” the principal sighed, pointing over his shoulder to the door he had just closed. “Better just let them… cool off.”Bookmark here

“Nicky!” the girl cried with elation as she wrapped her arms around the boy, her tears seeming to almost evaporate on the spot as joy returned to her youthful face. “I’m so sorry! Are you ok?”Bookmark here

“Don’t apologize…” the boy sniffed, wiping his running nose with his tattered sleeve. “It was my fault. Everything is always my fault, Holly!”Bookmark here

“But, Nicky,” Holly protested, “you didn’t do anything wrong! I’m the one who gave you that toy!”Bookmark here

It still didn’t make sense to Nicky and Holly. Their parents were getting upset over something as simple as Holly giving Nicky a wooden toy train. Nicky was the only student who hadn’t brought in a toy for the previous day’s show-and-tell. In-fact, he was the only student who didn’t even own any toys. When he told this to the rest of the class, Holly took pity on him and bestowed her presentation item upon him. She never played with the wooden train anyway. Nobody at home did. Her parents had always said it was a useless dust-collector.Bookmark here

“Your parents told me to give this back to you,” Nicky stammered, handing the train to his classmate. “I’m… I’m sorry for taking it home yesterday.”Bookmark here

“But, Nicky,” Holly pleaded, “I gave it to you! It’s a gift! You can have it!”Bookmark here

“HOLLY!” the girl’s father bellowed as he violently pushed open the door to the principal’s office. “Did that boy give you back the family heirloom yet?!” he grunted.Bookmark here

“Y-Yes, Father, I have it right here!” Holly bowed, offering the old oak train to the man. “But why can’t Nicky keep it? We never play with it!”Bookmark here

“Listen, Holly,” the girl’s mother sternly annunciated, “your father and I don’t want you going anywhere near this boy anymore.”Bookmark here

“B-But why?” Holly gasped. “Nicky is my friend!”Bookmark here

The principal turned his head away from Nicky, Holly and Holly’s parents. He didn’t want to be there. Like a child who hadn’t fully learned how to swim trying to brave the adult pool, he was out of his depth.Bookmark here

“Come on,” Nicky’s father said, emerging from the principal’s office and placing his hand on his son’s shoulder, “let’s go home.”Bookmark here

As Nicky and his father headed to leave, Nicky couldn’t help thinking about how things were always like this for him. Ever since he had amassed enough money from cleaning chimneys for his father to send him to school, people had been treating Nicky as if he was always up to no good. His father always just told him that that’s the way things worked when you’re poor, but that didn’t stop Nicky from thinking that he was always doing something wrong to earn the treatment he received from his peers.Bookmark here

A week had passed since the incident with Holly and the toy train. Nicky and Holly hadn’t so much as exchanged a single word since then. They were, somewhat ironically, like trains that passed in the night. Nicky looked out the schoolhouse window to the falling snow. The snowflakes all seemed unique at first, but that would never last. As they fell to the ground below, they combined into one mass of boring sleet. Those piles of mush were like Nicky’s classmates, he reckoned. Some of them may have seemed unique at first, but they all eventually shunned or harassed him. All apart from the ones that hit the window. They turned into water and slowly, pitifully slid down the glass pane, like the tears from Nicky’s eyes. But Nicky’s negative thoughts were cut short by a paper airplane hitting him on the back of the head.Bookmark here

Nicky wiped the tears from his eyes as he read the message on the origami aircraft.Bookmark here

“Why are you crying?”Bookmark here

The boy carefully peered over his shoulder. Waving at him from two rows of desks behind was Holly. Despite her parents’ demands, she wasn’t ignoring Nicky after-all. Nicky smiled and flashed his friend a thumbs-up before returning to his schoolwork.Bookmark here

After class, Nicky approached Holly in the schoolyard.Bookmark here

“Uh… here I am?” Nicky cautiously affirmed. “Were you trying to get my attention?”Bookmark here

Without saying a single word, Holly reached into her backpack and withdrew a small wooden steam engine. The same toy she had brought to school the previous week for show-and-tell.Bookmark here

“I want you to have it,” she smiled, holding it out towards Nicky as the two children locked eyes in the falling snow, “just… don’t tell your dad, ok? I snuck it out of the house without telling anybody!”Bookmark here

Nicky blushed as he took the toy train and stuffed it gleefully into his raggedy backpack. “Thanks, Holly,” he whispered.Bookmark here

“This will be our little secret, ok?” Holly asked, offering Nicky her right pinky finger. “Do you promise not to tell any of the grown-ups that I gave it to you?”Bookmark here

“I promise,” Nicky nodded, wrapping his right pinky around his classmate’s and blushing redder than a beetroot.Bookmark here

No sooner had Nicky pinky swore with Holly, did the principal ring the schoolhouse’s bell signaling all the children inside. And so Nicky, Holly and all the other students went about the rest of their school day as normal.Bookmark here

After school, Nicky and his father had a job to do. Being a chimneysweep was hard work, but someone had to do it. And in this particular instance, Nicky didn’t mind, considering whose chimney it was he was sweeping. This chimney belonged to a mansion which belonged to Holly’s family. Nicky felt he owed this to them, after Holly generously gave him her toy, not once but twice.Bookmark here

“Hey, Nick, I gotta go piss! You mind finishing up by yourself?” the boy’s father called up the chimney.Bookmark here

“Yes, Father, that’s alright,” Nicky’s voice echoed from out of the fireplace.Bookmark here

As Nicky’s father left the room, Nicky could hear his father bumping into Holly’s parents as they entered the room.Bookmark here

“Well it can’t have vanished, you buffoon,” Holly’s mother snapped, smacking her husband with her removed glove, “it’s not like the fireplace is haunted or something!”Bookmark here

“Don’t be daft, woman,” the man snapped back, “I never said this was the work of some ghastly devil! I reckon a thief must have taken it!”Bookmark here

Nicky went totally quiet. He couldn’t guarantee it, but he suspected the married couple were talking about the wooden steam engine. It was then that Nicky realized… he had forgotten to take the toy out of his backpack. The thought to empty his schoolbag after school never occurred to Nicky. It was muscle memory – the boy was so used to going straight from school to a job that he always packed his chimney sweeping tools in the same bag as his school supplies. After all, he only had one bag! “Why should I ever need to unpack it?” he’d always thought. As Nicky grew ever more and more nervous, sweat began accumulating on his palms. And then – slip! Nicky slid down the chimney, his soot-covered body promptly dispersed from the fireplace, the contents of his bag spilling out onto the floor in front of Holly’s furious parents.Bookmark here

“Nicky,” the boy’s father called out, running back into the room after hearing the ruckus caused by his fall, “are you ok?!”Bookmark here

Nicky could do nothing but watch as Holly’s father picked up the wooden locomotive, his expression not unlike that of a Japanese tengu mask.Bookmark here

“What is the meaning of this?!” the man growled.Bookmark here 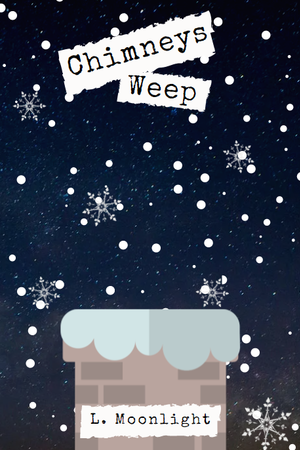