One day in the future...Bookmark here

Dopeman stumbled to his feet, looking around for that coin that sent him here in the first place. He was simply attempting to find an old rock that Kyle Tann said was worth a lot of money. He eventually realized he's no longer in Nevada, or even in the destroyed wasteland. Dopeman looked around, shocked. He was in the old world! The new houses, the fresh trees with clean streets were a sight he thought he'd never see again. It was a shock to the system, much like the shock that knocked him out. With not many options, Dopeman picked up his trusty shotgun and walked along the streets, seeing what can he find tonight. Hopefully, some answers.Bookmark here

After a few minutes of walking along the paths of modern civilization, he sees a large drive-in theatre. "Huh. Haven't seen those in a while. Might as well enjoy this fever dream while it lasts." Dopeman said to himself. He hid his shotgun under his cloak and started to venture into the theatre. It was showing a horror movie it seemed. Strange enough, it was a movie he's never heard of before. Bookmark here

Psycho Killer?  What the hell is a Psycho killer? sounded like a rip-off of Maniac Man that came out in the 80s.Bookmark here

He looked around to see the license plates of the cars. Bookmark here

Texas? How did he get to Texas? He was getting more and more confused by the minute. He shook off the confusion and just started to walk, attempting to think while the movie played in the background. It was then where he saw something even weirder.Bookmark here

A stranger in a hockey mask, attempting to open a car door. Bookmark here

They stared at each other for a second, getting a good look at each other. Dopeman knew that wasn't their car. They looked like a villain from a horror movie with that hockey jersey that represented the Montréal Canucks, that goalie mask, and that literal weapon they held in their hand, a hockey stick that had a blade at the end of it.Bookmark here

"The hell are you doing to that car?" Dopeman asked. Bookmark here

He got no response, only the villain attempting to take his head off with the stick of death. Dopeman dodged it, rolling out of the way. It hit the front windshield of somebody else's car, and into the forehead of a poor soul. The passenger screamed, and the rest of the patrons did as well, choosing to abandon their plans (and cars) for the movie. As the people escaped, The stranger attempted again to kill Dopeman with an overhand blow, only for him to block it with his shotgun. There was a test of strength, seeing who will fold first. Dopeman had enough and kicked them, sending them flying back to a car, hitting the door. He aimed his shotgun and fired to finish the job, but the stranger dodged, using their rollerskates to close the distance before Dopeman could react. They slashed his side, causing the courier to yell and whack them right in the hockey mask. Bookmark here

They staggered, so Dopeman took advantage. After disarming them, he started to use his fists. He started to land blow after blow, punching them in the stomach, mask, and everywhere else that was available. Hockey Mask attempted to fight back with blows of their own, catching Dopeman with a mean right hook that had him seeing stars. Of course, Dopeman would counter with a mighty slam after picking them up and dropping them on their back, making sure their head bumps on the cold hard concrete below.Bookmark here

Dopeman panted as he looked at the unconscious killer. He had no heart to kill them, just hoped that they would leave him alone. Bookmark here

As Dopeman limped out of the theatre, he saw the remains of the people running and screaming. A cop car soon came on by, screeching loudly as the man hits the breaks once he saw the strange-looking Dopeman. Bookmark here

The four cops stepped out of the car, magnum trained on him like he was the one who caused this. "Freeze, young'un! What in tarnation is going on here?!" said one of them. Bookmark here

Dopeman had his hands up, hiding his shotgun on his back. "There was crazy guy, had hockey mask, he killed somebody! You got the wrong man!" Bookmark here

Before the cop could say anything, he received a flying hockey stick to the dome for his troubles. As he collapsed, the rest of the cops fired on both Hockey Mask and Dopeman, thinking they're together. Dopeman rolled and ran as Hockey Mask slaughtered the cops, going down a random street until he reached a guard rail overlooking the cliffside. He looked around for a way to run, but he heard the heated stakes hit the concrete. Dopeman shot at them the best he could, but Hockey Mask was quick. They slashed his cheek as Dopeman barely dodged the attack with the stick. Dopeman attempted a kick, but Mask ducked under it going for the final blow to the chin. Dopeman moved his head back just enough to avoid the blade, tripping the stranger as he fell back as well. They both stood, knowing this was the final battle. Dopeman moved back towards the railing, looking like he was running. Hockey Mask saw this and charged him, only for it to be a trap. Dopeman jumped over Hockey Mask and kicked them, sending them over the railing and into the deep cliffs below. Since he had the blood on his hands already, he might as well make sure the job is done. He loaded in his high-explosive shot and fired into the depths, making it explode. Bookmark here

Dopeman looked out into the city. He was in a similar place, but this was all too different.Bookmark here

He looked to his right and saw the coin yet again. He kneeled and grabbed it again, doing the same effect of shocking and knocking him out cold.Bookmark here

Hopefully taking him back to his time...Bookmark here 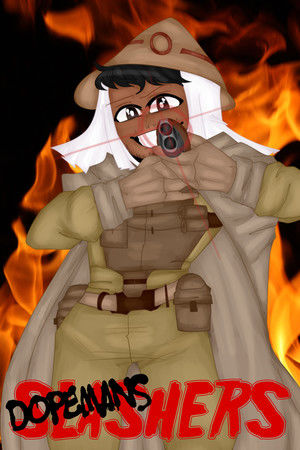