Merry stood outside the door to cell number 510. She was starting to have second-thoughts about stepping inside, but what other choice did she have? Live out the rest of her sentence in constant fear and hiding?

“This is it,” she muttered, pulling the door open dramatically. Thoughts and emotions were spiraling around inside her mind like a roundabout in the playground. If her life was an anime, then this would be the scene where the ending theme would slowly start to fade in. “I’ve accepted my fate. If I die here, then so be it…”

As Merry closed the door behind her, she was greeted by the familiar singsong voice of her deranged cellmate.

“What’s the craic, Marisa?” Colleen chirped as she slammed Merry’s head into the back of the door. “You’re so mean, Marisa. Leaving me all alone like that. How could I ever live with myself if something bad had happened to you?”

Colleen stared down at the succubus tail tucked between Merry’s legs.

“Ooh, naughty,” she cooed, tugging hard on her cellmate’s new appendage. “What’s this attached to then, Marisa? The inside of your skirt? The back of your underwear? Maybe somewhere more… intimate?”

Merry yelped in pain as Colleen violently pulled on her tail.

“No matter,” Colleen shrugged. “There’ll be plenty of time for me to figure out how you’ve attached that fake tail once you’re dead!”

Colleen let go of Merry as she reached into her own cleavage and brandished her trusty scalpel. Merry shut her eyes as Colleen lunged forward, ready to cut the newly-succubusized Merry into a million little pieces.

Merry heard the distinct squelching sound of a sharp object piercing skin, yet her body felt no immediate injury. Had all of her recent emotional pain dulled her to the sensation of physical pain? Or perhaps she couldn’t feel any pain because she had died a swift death?

If I open my eyes right now, will I be greeted by the Pearly Gates of Heaven? Merry wondered. Only one way to find out, I suppose…

Merry slowly opened her eyelids. To her surprise, she was bombarded with the image of her prison cell and her tail extended in front of her. Her pupils shrunk in horror as she watched blood slowly trickle down her tail. Following the bloody trail, Merry was greeted by the ghastly sight of her succubus cauda piercing Colleen’s chest. Merry quickly retracted her tail and watched as Colleen’s limp body fell to the marble floor.

“C-Colleen?” Merry stammered, lightly prodding Colleen’s cadaver with her foot, causing more blood to spill from the corpse and drench the cell floor.

Merry fell to her knees as she watched the bloody scene unfold before her amber eyes. Was this the ‘succubus power’ that Anesidora had mentioned?

“Th-this can’t be happening,” Merry sobbed. “I-it was an accident! I-I didn’t kill her! I’m not a murderer!”

Merry yawned as she awoke from her slumber. She hadn’t gotten much sleep that night, due to constantly replaying Colleen’s death in her mind – The scared expression on Colleen’s face, her skin pure white and devoid of color, the pool of her blood spreading rapidly across the floor. Merry had hoped that it was all just a horrible nightmare, but a quick glance to her right quickly rebuffed that theory. Colleen’s corpse was lying on the reddened floor, the fear that she felt during her final moments still worn on her face.

“Merry, Merry, Merry,” a familiar voice whispered, its catlike owner emerging from the wardrobe. “What are you crying about? In case you’ve forgotten, that girl was going to kill you!”

“You wouldn’t get it. Human emotions are probably too complex for a demon like you to understand.”

“You’re a demon too,” Anesidora retorted. “Look, Merry, I’mma let you in on a little secret – In this world, it’s kill or be killed.”

“So this girl just bled out on her own?” Anesidora smirked, gesturing the body on the floor.

“Th-that was an accident,” Merry protested. “If anything, this is all your fault!”

Anesidora walked over to Merry and sat down beside her. Despite her size and build, the catgirl didn’t seem to disrupt the bed whatsoever.

“Merry, that tail acts on your subconscious urges. If that girl is dead, it’s because you wanted her dead.”

That couldn’t be true. Sure, when Merry first arrived at Aluminum Pigeon, she had wished that every criminal would just die, but that was just a passing thought. That wasn’t really how she felt… right?

“Merry,” the creepy catgirl conversed, interrupting Merry’s thoughts. “You should probably dispose of this body before a warden shows up to call you for breakfast.”

“How am I supposed to get rid of a body, genius‽”

“Gods, you’re hopeless,” Anesidora sighed, picking up Colleen’s body with one hand and opening the wardrobe with the other. As Anesidora was shoving Colleen’s corpse into the wardrobe, Merry looked at the pile of clothes that were lazily thrown to the bottom of the compartment. She reached down and pulled out a pair of opaque pink tights.

“Oho,” Anesidora chucked. “Stealing from the dead? That’s a pretty shitty thing to do, don’t you think?”

Merry ignored Anesidora’s quips as she pulled Colleen’s tights over her legs. They were a bit too figure-hugging for her liking –and pink definitely wouldn’t have been her first choice of color– but they obscured Merry’s tail, and that was all that she cared about.

“Like an oddly sexual fitness instructor from the 80s.”

“Wh-whatever,” Merry huffed. “Thanks for taking care of Colleen’s body, but what are we gonna do about all this blood?”

“Must I do everything myself?” Anesidora scolded, getting down on all-fours and beginning to lick the blood off the ground.

“A-are you going to lick up all of this blood yourself?”

“Are you offering to join in?” Anesidora smirked. “There’s more than enough blood to go around.”

As Merry watched her new “friend” clean the floor, she couldn’t help but chuckle at how ridiculous this whole situation was. Less than two weeks ago, Merry was a perfectly normal girl leading a perfectly normal life, and now she was an extraordinary succubus trapped inside a Texas prison with a 6-foot-tall catgirl as her only companion. She certainly wasn’t fond of the current circumstances, but they were definitely preferable to sharing a cell with a convicted serial-killer… 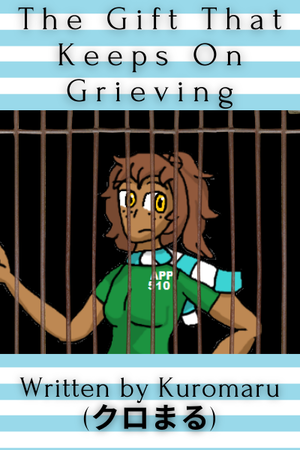