The realm of Phantasia, a world not unalike our own. Much of the land is inhabited and industrialized by mankind. Humans are free to roam the towns and cities scattered about the relatively small dimension. …But there is another race of sapient, sentient creatures which lay claim to Phantasia and its resources – demons.Bookmark here

Although they look nearly identical to humans, demons possess supernatural abilities far beyond those which we are capable of. To the denizens of Earth, the demons’ powers could easily be mistaken for, or considered to be, a form of magic. It is for this reason that the human settlers of Phantasia, originally from our world, classified the most powerful of all the demons as “witches” when first they discovered them.Bookmark here

Wandering into Phantasia bestows a great, witch-like power upon Earthlings, although crossing into Phantasia does not cause genetic modification. Thus, this great power was not passed down to the descendants of the original human settlers. The only way for a human in Phantasia to possess this power – the power to channel one’s imagination into a demonic form – in the present day is by them being born in our world and wandering into, or being forcefully taken to, Phantasia, just like the people who had entered the magical realm in the past.Bookmark here

However, stumbling upon Phantasia is not a common occurrence. In the days of yore, Phantasia shared many psychic borders with Earth – borders which took the form of invisible walls that only those determined enough to cross could phase through. But now, only a single link remains located in a rural part of Texas, USA. To the people of modern Earth, Phantasia exists solely in the fictional universe presented within the novels of one Maryanne-Susan Webber – unbeknownst to them, M.S. Webber’s novels, while dramatized significantly, are not based solely in fiction, as the author had some first-hand experience with the magical realm. Those novels, which capture the imagination of all who read them, would become the perfect tools to create potential kinkind summoners – those select few humans from our world with the imagination required to create and channel their own original demonic entities based on those presented to them in M.S. Webber’s texts.Bookmark here

Perhaps that was why more of these kinkind warriors started appearing? One after the other, all sorts of humans appeared in Phantasia with the ability to channel their kinkind – manifestations of demons from their own imaginations. One who could negate others’ magical abilities, one who could move any object with its mind, one who could shoot a powerful laser from its single eye and many, many more…Bookmark here

Eventually, these kinkind warriors came to learn of the Witch Games, an annual event wherein demons and witches compete to be officially recognized as bearing the title of “witch”, all but guaranteeing the winner celebrity status. Some winners, such as the super-powered minotaur, even landed successful careers in the police, military or the like off the back of their success. On Earth, December the twenty-fifth is regarded as a religious holiday. A day for celebrating the people and the things that we hold dearest to our hearts. For giving and receiving gifts exchanged between loved-ones. But even before the concept of “Christmas” had formed, it is speculated that similar festivities were already commonplace on the twenty-fifth of December. And while these celebrations eventually morphed into what we now call “Christmas” in our world, they evolved into something quite different when human settlers first brought them into Phantasia. And thus, the Witch Games were born. A no-holds-barred battle to the near-death open to all demons and witches. Like most aspects of demon culture, this event was basically unknown to the modern-day Phantasian homo-sapien population, but for the magical beings that inhabit the dimension, the Witch Games are the highlight of many of their respective years.Bookmark here

But once the kinkind warriors started showing up, a few witches started to take notice. Notice that something… was very, very wrong. One or two kinkind warriors were to be expected every year, but more than half of the 2019 games’ participants were otherworldly humans. Since demons were incapable of leaving Phantasia, could it have been possible than a human on the other side of the borderline in Texas had discovered it and exposed the magical realm’s existence to the masses? Or, perhaps… some demon was spiriting them away from within Phantasia’s borders with some kind of magic…?Bookmark here 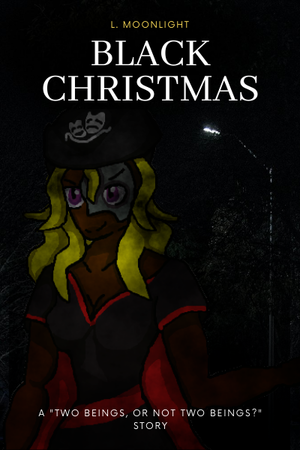