Anyway, For the Hololive Fans, I'm sure you all knew that Amelia can time travel. The point is-, In this story, She dont have the power to travel time yet. Just wait and be patient until the time comes she will get it. The 'Chapter 8.5: Myth' is the clue for Amelia's power. If your a hololive fan, Its a piece of cake.Bookmark here

A skeleton was sitting on a throne covered by a cloak, Confronting the pool of souls below her. The souls were getting is noisy in their confusion, Mostly is 'What just happen?' or 'Where Am I?' That's the word mostly comes out from the pool of souls.
Bookmark here

'This is the total population of all lifeforms in earth' The skeleton thought as it looks to the huge population of souls.Bookmark here

Not long after that, The souls notice her existance. They started to step back and others are readying their stance to run.Bookmark here

"Wait!" The skeleton shouted as its red eye gleamed.Bookmark here

The fear of the citizens got worsen due to the skeleton speakingand its gleaming red eye. Even they fear it, They still obey to what it spoke.Bookmark here

Shadows covered the skeleton's body, Pink silky hair expanded and a figure of a matured girl was formed. The previous skeleton is now a matured hot, thic girl with a bouncy chest woman. She wore a long black skirt with a opening in her right leg and her clothes were like a black chef uniform with a opening in the chest.Bookmark here

A black long scythe spin in the mid air as it approach to the female figure. She catch it with her right arm before putting it behind her.Bookmark here

The perverted males can be seen their mouth drooling and their nose bleeding. She folded her arms below her chest before taking a breath. "Listen Deadbeats!" She yelled as her voice echoed the whole place. "My name is Mori Calliope and I am the Undead Queen, I'm sure you all are confused what your doing here, This is hell, I am a soul repear who will lead you to the afterlife. All of you here are sinful people that's why your in hell. Perverts, Murders, Greedy, And many more. There are other good people since the heaven is full"Bookmark here

A person's hand raised up in the crowd.Bookmark here

"What is it?" Calliope asked.Bookmark here

People made a space for the undead queen to see the figure of a girl "Umm..." A figure of a young teenage student girl can be seen wearing a white uniform. "How did I die?, I'm sure I was in my classroom until theres a earthquake and a purple light just suddenly lit the whole place?" The girl asked.Bookmark here

"You all met the same fate, There are others here who died early due to traffic accidents or something but 99% of you died in the same fate and that is... Being caught in the revival of Ancient Darkness. In the revival of Ancient Darkness, A purple light will cover the whole world and when you get caught in the expanding light, Your soul will forcefully come out from your body. In other words, Instant death" Calliope spoke loudly.Bookmark here

"So what is this Ancient Darkness thing?" A hand raised up in the distance, This time its a man in a formal clothes.Bookmark here

"Can I ask something?" Another hand raised up.Bookmark here

"Is Ninomae Ina'nis the one who caused all of this?" A figure of a guy wearing a formal clothes again.Bookmark here

"How did you know such thing, Yagoo?" Calliope asked with a tense glare.Bookmark here

"I am the one who hold the Ancient Darkness until one day it suddenly disappeared. A detective was sent to investigate but suddenly the book reappear again in its place using magic. And We found out that the one who stealed it is named Ninomae Ina'nis"Bookmark here

Calliope sighed thinking that, She don't want to bother releasing much information but a human with a knowledge about it just ask that she don't have a choice but to answer "Yes, She is the one who caused all this"Bookmark here

Another hand is raised. This time, A figure of another man with a black hair and blue eyes, Unlike the others with plain black "Is there someone who survived?" The guy asked.Bookmark here

"There is a single person" Calliope answered with her eye closed before grabbing the scythe in her back and raise it up. Shadow rise from the scythe and gathered above her before expanding and made a hole in the center. The hole gave a scene of a crumbled place as the place got engulfed by flames and a blonde hair girl with a blue eyes ran around. "And her name is... Amelia Watson"Bookmark here 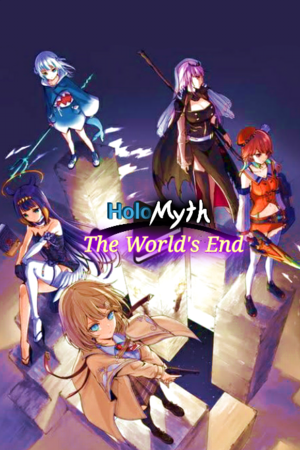