In the mountainous suburb of Ersa, northeast of the capital of Altair state, Himalia, turmoil was brewing in a research facility in the middle of the night.

“What was that,” a middle-aged man who just came out of a room asked the younger man who happened to pass by.

“Chief, the outer wall was destroyed,” the young man responded while catching his breath.

Right before the young man explained the situation, a broadcast was heard all over the place:

Emergency Alert. Unknown identity has been detected within the laboratory’s premises.

The alarmed Chief dashed toward the control room to observe the situation. A female researcher then approached him.

“Chief, bad news! The security cameras were all hacked. We suspect that it’s the intruder who did that.”

“Unfortunately, we cannot identify him. Apparently, his information was not even registered in Altair Gen. But, we managed to capture a photo of him thanks to a roaming security drone.”

The Chief looked at the screen showing the photo of a cloaked person hiding his face in the darkness.

“Concealing his identity, huh? Order our armed force to intercept him. He’s just a cocky trespasser. He’s no big deal.”

The Chief then headed for an exit while saying, “Continue retrieving back the ones he hacked.”

Several broadcasts followed as he walked through the corridor leading back to his room.

The Chief was shocked. He began to dismiss his thought that they were dealing with a mere cocky trespasser.

– That scoundrel! The security barrier of this facility is formidable, but he broke through it. Who might be him?

– Guess I got no choice but to use that.

He pulled a device from the pocket of his lab coat and pressed the button. After that, a gun appeared out of nowhere.

Meanwhile, the cloaked person who had just hacked his way through the first three barriers attempted to open the fourth one, Delta Barrier. But he was intercepted by a mob of armed personnel and robot hounds.

“Intruder! Be a lamb and show yourself!”

The intruder raised both his hands, but they were all just pointing their weapons against him and wouldn’t take the initiative to restrain him.

“Didn’t you hear us? Remove your cover.”

The intruder turned around, facing them. But everyone was surprised by what they saw.

After that, the eyes of the robot hounds changed from yellow to red. Then, they went rogue, and attacked the armed personnel. There was a lot of screaming, and during that, the mysterious intruder suddenly disappeared from his position, leaving a streak of purplish-white light that faded a few seconds later.

It was supposed to be the research facility’s last and most formidable security barrier, but the unidentified intruder broke through it. That barrier protects the heart of the facility, the Data Vault, which rooms a vital piece of research data.

It was the target of the intruder. While attempting to open the Data Vault, he received a sarcastic welcome from the facility’s head.

“Nice to meet you, Intruder!” Standing behind him was the Chief, who seemed to be waiting for him.

Chief continued, “What brings you here?”

Instead of talking, he responded through his eyes as they glow even brighter.

“You’re not gonna answer, huh? Sorry to say but I’m not allowing you to even set foot inside the Vault.”

The Chief fired his gun against the intruder. But he disappeared just when the bullets were about to hit him.

The Chief looked around, but the intruder was nowhere to be found.

Meanwhile, hiding behind a column, the intruder mumbled in a robotic voice, “INITIATING SEQUENCE...”

Suddenly, the Chief’s gun disappeared, much to his shock.

He picked the device he used to equip the gun and pushed the button, but the weapon wasn’t reappearing no matter how many times he did it.

– I knew it. That scoundrel might have inserted a self-destruct code. When he disappeared, I felt a light force on my coat. Probably, that’s when he did that. And that happened in a fraction of a second.

Those words from the intruder created an explosion inside the hall. Tremors brought about by that reached the area where the researchers and the one who encountered him earlier were. The Chief’s face was dripping with blood, and his arms were scathed. It’s uncertain whether he’s still alive or not.

Meanwhile, the intruder flew to a safe distance and opened the room labeled “Data Vault”. Inside, a glass-like podium was at its center, and a glowing tablet floated over it while a faint spherical ball of light surrounded it.

He touched the seal, and his eyes glowed once more. The seal vanished, leaving the tablet in the open. He grabbed the tablet, and it dissipated.

“MISSION ACCOMPLISHED,” he said in a low tone.

His eyes were throbbing and gradually lost their glow like used LED lights. At last, he felt the effects of consuming much of his energy. He must have been exhausted the most from creating that explosion.

The people who confronted him earlier entered the scene and tried to capture him while he was weakened and to retrieve the stolen data tablet. But the intruder used his remaining strength to escape the facility. He vanished in thin air.

Then, he was seen appearing from one spot to another above the city as if he was teleporting. He headed southward, but his destination was unclear.

(A/N: The identity of the cloaked person is still unknown. In the meantime, the pronouns “he/him” are used.)

[An unidentified person stole a highly confidential data tablet in the branch laboratory of Encrypt located in the Ersa suburb last night. The attack caused two casualties and a few injuries, including the lab’s head, Dr. Basile Lémieux. According to one of the armed personnel who encountered them, he possessed an unknown superhuman ability and incredible hacking skill. The authorities now call him…]

[He’s now a potential threat against the city.]

– That very evening, the news broke out and spread not just in Himalia but throughout the entire country-state of Altair. His notoriety was about to start and shake the peace in the city. 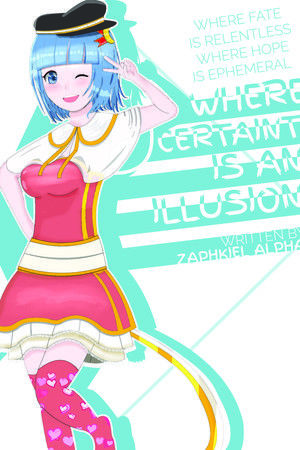