From the heavens came a bolt of energy, crackling the air around it as the power of the lightning accumulated, becoming a single beam so that it would be able to reach its target, the young woman whose arms were raised above her, blonde ringlets soaked in the rain yet still frizzing up due to amount of sheer power the skies above her held. With a bang, the energy sought its endpoint and struck, hard and true. Yet the woman still stood the same, reaching to the sky as if asking for more of its wrath. Again, thunder rumbled and the electric discharge found her other arm, letting the might of the lightning course through her. Now, she clenched her fists and let them fall, the only difference in her being the static that surrounded her frame, slightly messing with her hair.Bookmark here

Seemingly done with the lightning, she put on a burst of speed and raced back towards the building from which someone stood, watching her through a window, dumbfounded. Those with powers were not unheard of, but seeing the display in front of him gave Dr. Bennett an idea.Bookmark here

This woman, Faven, as she had introduced herself this morning, would be taken by heroes if she were to reveal her ability with lightning. Her power was a danger in itself, something that could ‘lead her down a wrong path’ as heroes would say. That meant that securing her until she gained their trust was something they’d want so that they would be able to deal with one less troublemaker or villain. Yet, here she was, incompetently reckless and seemingly idiotic, letting anyone who saw her be the one to use that fact against her. Like Bennett would. Of course, he wouldn’t be using it against her too much. He’d just make her help him to find Meghan. Maybe with force. After all, his sweetheart was what he was after. He needed to find her, to save her, to hold her hand once again. He wanted to be the one that she trusted to be there in her times of need. After all, she had come to him first, in need of his help.Bookmark here

“Teach me what you know. Please,” the woman stares at the back of the owner of the house, standing in his garage as he experiments with chemicals she’s never seen before.Bookmark here

“Sorry, love, I don’t do tutoring,” he rolls his eyes as he pulls his goggles down, just in time for a puff of smoke to shoot out at them from the tube he was currently holding. The woman watches as he pours the substance into a beaker, stirring it constantly.Bookmark here

“You’re Dr. Bennet, aren’t you?” The man seems to pause for a moment, then grabs another tube and stirs around its contents before pouring that one in too.Bookmark here

“Who wants to know?” A nonchalant voice, slightly curious. The woman takes a nervous step forward, fiddling with the zipper of her jacket.Bookmark here

“Well ‘Meghan’,” the doctor turns to face her, “it’s sort of obvious that you aren’t here to learn my villainous ways.” The young woman looks embarrassed.Bookmark here

“Not exactly, I’d just like to learn about your inventions…” Maybe she’s lying, maybe telling the truth, but the doctor is infatuated with human nature now, sort of like a child is infatuated with a toy for a certain period of time. And the notion of someone interested in his inventions has sparked a little light.Bookmark here

“Why don’t you come in, Miss Freyer?”Bookmark here

Shaking his head to clear away other thoughts, he decided to face her head-on instead of secretly blackmailing her. He was sort of sick of how he had done things in the Dark Age anyways. Always hiding away, knowing that his age could be something that would be used against him. But that era was long gone now. If Meghan forgave him for what he’d done, he could forgive himself as well. Subconsciously, his hand reached down to the pendant around his neck, the only thing he had left of Meghan after she had disappeared. He had known that the heroes had taken her, though. It was obvious.Bookmark here

She had taken the items she’d need for the morning only. And the butterfly keychain with those pink gems, the keychain that she had told him was her ‘lucky charm’, something that sometimes helped her to be less nervous. He’d known that she was going to an interview with a hero group. Meghan had specifically come to him for that reason which is why he’d never forget her ‘dream’, as she had called it. He didn’t have any dreams for himself either, which is why he had started to become deadset on helping her achieve hers. Even though it was the opposite of what he’d always been. He didn’t care what she wanted. As long as he could help her reach her goals.Bookmark here

Exiting the break room by less used passages lest he get caught, his mind again wandered back to how he was going to get to Meghan, the only constant thought in his brain. As of right now, her location was pretty hidden. He also had no leads yet, which is why his first plan of action was to get someone under his control to help him. Although he worked alone, he decided not to mind this mere human named Faven, letting her bask in his presence (as he had seen henchmen do in cartoons) as long as she kept a good distance. Bennett opened the door to the main power room where he knew she would be with all that lightning and the power outage.Bookmark here

He was right. Faven was there, tinkering a bit with the wires and cursing their unwillingness to help her under her breath. Bennett smirked a little. She was funny. For a human. Making sure to keep a calm, collected, and serious air about him, he shifted towards her peripheral vision, walking slowly. Best not to surprise her if he had all that electrical potential on her. As expected, she turned to face him as soon as she knew someone was behind her. Bennett stopped a few feet away from her and placed both hands in the pockets of his pants, cocking his head a bit to the side, trying to look a bit friendly.Bookmark here

“Quite a show you put out there.” Faven just stared at him as if she hadn’t processed what he said. Bennett wondered what she’d do. There were many such possibilities of what could happen, but he’d narrowed them down to a few options. When humans were confronted by an obstacle, they would either use one of three techniques: fight, flight, or freeze. In this case, he decided, he could add a new component, one he would name ‘fake’. She could fake innocence and try to divert the conversation. Lying. One thing he despised, yet so common among human nature.Bookmark here

“Out where?” She asked with a confused smile. Of course she would pick the one option Bennett hated the most. He sighed inwardly, but smiled at her.Bookmark here

“Oh, just out in the parking lot. You were collecting lightning, no?” Faven gave him a blank stare for a few seconds before turning back to the control panel.Bookmark here

“Oh, that. Yeah, I guess.” So after feigning innocence, she had decided to give in. How interesting. Although, what she had just said had a lining of more boredom and disappointment. Did she perhaps not care what happened to her or was she just testing him? Bennett slightly tilted his head so he could see what she was doing.Bookmark here

“So, you’re not the least bit worried that I might rat you out?” Bennett asked aloud, wondering whether she’d already have some kind of ace up her sleeve with the heroes so as to not get caught. Maybe bartering with them or some kind of information giver? Or was she a hero herself?Bookmark here

“Nah,” Faven replied, interrupting his thoughts. He glanced at her face, which held a sweet smile, “I guess we’re even now?”Bookmark here

“Even?” Bennett tried to keep his features unbothered, but couldn’t help a slight frown. She couldn’t have possibly known that he was the Dr. Bennett, King of the Dark Age. After all, no one had seen his face in that era. And Bennett wasn’t such a rare last name that they could trace him back to his alter ego. So what was it that she knew about him? This morning flashed into his mind when she had seen the little robot he had given sentient life. Was that what she was referring to? If so, it wasn’t much of a big deal. He could just say that she was lying. She didn’t have any proof after all. Unless she took something from his lab. That would put him in an even worse situation.Bookmark here

“Oh, I just happened to glance at the building plan from before,” she turned to him with a coy smile, “I know you somehow added to the building. How you did it is a mystery, but I’m sure the other scientists would love to hear about it.”Bookmark here 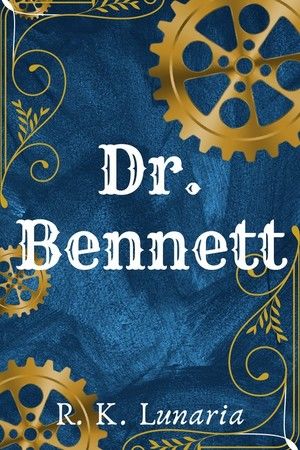