SS is not Supersession

When I saw SS for the very first time, my initial thought was that she told me the truth. She did say she was uglier in real life.

“You are much hairier than I expected.”

SS scratched her head. His. I wasn’t very sure what pronouns to address SS by. At times, he demanded that I call her Yumiko, and at others, she would show up in the HoneyFeed Discord server raging about how he (or she) wasn’t a virgin and that everyone was bullying her. I didn’t think that was a feminine trait in the slightest, but what do I know? I’m only 15 years old.

“Tenses,” SS says. “You’re slipping from past to present tense. Everyone knows tense consistency is the most important criteria readers consider when selecting web novels. I know this because someone commented about it on Chapter 4 of What I Write under the guise of ‘constructive criticism’, even though what I wrote makes sense given the context of Kohei writing a journal recalling events from the past. The quip Kohei made using the ‘present tense’ as the commenter points out is actually his feelings in the ‘real present’ as he writes, rather than the ‘narrative present’. It is hence grammatically correct. Alas, the commenter was not intelligent enough to make this distinction, but this did not matter as I decided to change all the tenses in the aforementioned chapter to past tense in a moment of weakness shortly after reading his comment.”

I didn’t know what the fuck SS was talking about. “Er… Sorry?”

“Good. You are very tall for a Spanish teenager, Alejandro Mamatulas Minipito Donpolla. You are 185cm, 70kg, your BMI is 20.5 and your hobbies include writing and playing visual novels. You are also a virgin with a phobia of graphic sex scenes.”

After saying that, SS produced a paperback from his Speedos, which was the moment I learned conclusively he was a guy. For a split-second, sunlight fell on a place where it shouldn’t have fell and reflected the image of a hairless penis for my eyes to see. It contrasted sharply with the copious amounts of hair on every other part of his body. It was too small to make a lasting impression, though, and so my phobia was fortunately left untriggered.

I instinctively reached out for the three anime characters on the paperback, which included a male character sporting the same hairstyle as SS himself. Unfortunately, just as I was about to lay my hands on a hard-copy of possibly the best web novel I’d ever read, the man snatched it back like a carrot on a stick.

I begrudgingly took out my phone, liked SS’s most recent chapter of “Thanks For Saving My Life, But I Won’t Be Able To Stop Jerking It Until You Kiss Me Again!”, then showed him my screen.

“Nope. Recently, views have been bad, so I want a comment as well.”

Just do it, Alex. You’d totally do it for Pearlyn. Why have double standards?

My fingers moved like lead, but they moved nonetheless, and eventually I wrote a message which I felt would appease SS.

[I lost ten minutes of physics class to sneakily read this. Not disappointed at all.]

As my thumb hovered over the Post button, I realised that the comment was an obvious lie since nobody took 10 minutes to read a 1,000 word chapter unless it was utter shite… but maybe the fact I was Spanish and in the “midst of class” would be mitigating enough such that no one would question me. Feeling too lazy to rewrite (as usual, because Blip is lazy… I mean Alex), I let my comment praising SS be known to the public and looked at the man in Speedos expectantly.

SS scratched his stomach menacingly, like a monkey. I could see that he’d separated his abdomen into six parts using a sharpie.

“You are cognisant of the untold.”

“THE READ TRADES!” his voice boomed.

SS began to gesticulate wildly as he ranted about how the system was set up against him: how nobody reads his novels because he’s a guy, how everyone fundamentally disrespects him since he writes “LN-style”, and how he would never be featured on “Staff Picks” because he expressed JUST ONE TIME that he wished to see Anne Fowl’s feet (SS did not know she was married). Because of this, he had to resort to the dark art of read trades to boost viewership inorganically since no one ever engaged with his work of their own accord.

However… as animated as he was, I knew he was wrong.

“What the fuck are you talking about?! You’re like the only person on the site making the monthlies that isn’t a contest winner or a 100+ chapter behemoth… Hell, you uploaded that smut story that wasn’t even smut and hit weeklies with it! Why are you even complaining? You have it good!”

“Silence, fool! You unironically liked Heir of the—”

Satisfied with my response, I started to turn my back on SS. Whilst doing that, I decided to give him a parting shot — anime villain style.

“And for the record, it isn’t because you’re not a girl. It’s because em dashes fucking suck, and you use them like a coke addict snorts coke. It’s really a shame, Superses… oh fuck.”

I clamped my hands around my mouth.

His neck cracked violently to the side.

His arm extended longer than humanly possible, grabbing and turning me around by the nutsack.

“What the fuck did you just call me?”

It’s funny, isn’t it? One moment, you feel a slight discomfort around your reproductive organs, and in the very next, your balls have been obliterated into a red mist.

Yowch! I had learned pain.

But instead of letting me fall to the floor, SS was holding me up using the sheer force of his telekinesis.

“DO NOT FORGET, BLIPXP. I MADE THIS UNIVERSE UNDER YOUR WISHES. OR DO YOU WISH TO REBEL AGAINST ME?”

It was hard to move without my balls, but I managed to shake my head.

No. I will obey you, master.

“GOOD. THEN LET’S TRY THIS AGAIN.”

He held out one of his grotesquely long arms, pressed it against my forehead, then chanted three words.

The next thing I knew, I was falling into a deep, dark abyss — one which would teach me the true meaning of the Isekai tag, and one where I would be subject to nothing but inexplicable run-ins with badly proportioned anime girls.

When I saw Ayenne for the very first time, my initial thought was that she told me the truth. She did say she was prettier in real life. 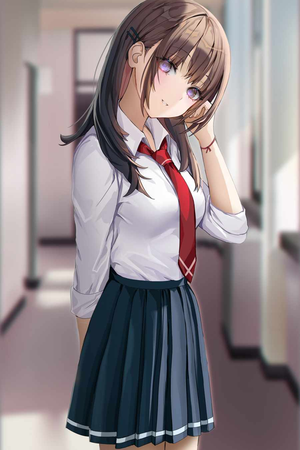