Two Beings, or Not Two Beings?

“Hey, this is Arthur. I’m not home right now. Please leave your message after the-”Bookmark here

Jackie hung up. She’d been trying to reach her best-friend Arthur King all week. She just had to recommend him M.S. Webber’s latest novel Two Beings, Or Not Two Beings but he wasn’t answering his phone and he and Jackie lived too far apart for her to drop everything and visit him. Jackie sighed and put her cell phone back on the coffee table next to her. She lifted the blanket that was covering her body off of her person and flung it over the back of the couch. She looked around. She couldn’t remember where she put her new book.Bookmark here

“Hey, Sarah,” she called out, “have you seen my copy of Two Beings, Or Not Two Beings anywhere? I want to finish reading it today!”Bookmark here

Jackie’s identical twin sister appeared in the doorway. Sarah was the spitting image of her sister, apart from the fact that her clothes, a pink- and green-striped sweater dress, were much flashier than Jackie’s plain black t-shirt, translucent leggings and blue denim jean shorts.Bookmark here

“I have no idea what that is,” Sarah told her twin. “Where’d you last see it?”Bookmark here

“I dunno,” Jackie said, trying desperately to recall where she had misplaced her novel. “I thought I put it on the coffee table.”Bookmark here

Although Jackie’s memory wasn’t great, she was pretty sure she’d left the book on the coffee table the previous night.Bookmark here

“You’d forget your own head, if it weren’t attached!” Sarah joked.Bookmark here

“Hey, sis. Since you’re here now do you want to play a game?” Jackie asked.Bookmark here

Aside from Arthur, Sarah was Jackie’s best-friend. Like most twins, they were as inseparable as non-conjoined twins could be! Although they didn’t share many hobbies, the two were never far apart. While Jackie was reading fantasy novels or attending online lectures, Sarah could often be found a few inches away watching anime or coordinating some garish outfit. Both siblings did enjoy a good gaming session every now and then, though.Bookmark here

As the sun slowly set and darkness crept in through their apartment’s windows, Jackie and Sarah eventually finished playing their video-game.Bookmark here

“Oh man,” Jackie exclaimed, “it’s getting pretty late! I have to go buy a new copy of Two Beings before the shops close!”Bookmark here

“A likely story,” Sarah quipped, “you just don’t want to lose for the fourteenth time in a row!” The two girls laughed. “Hey, while you’re out, can you pick up a banana fizzy drink for me? I’m all out!” Sarah asked her twin.Bookmark here

“Eew, how can you drink that piss?” Jackie laughed, grabbing her handbag and facemask before exiting the room and making her way to the apartment’s elevator.Bookmark here

As she stepped out onto the busy streets, she was greeted by the chimes of Big Ben. She looked towards the clock tower. 8PM. The shops closed at nine-o’-clock. Jackie clutched her handbag and ran for the shops, completely focused on making it on time. Completely oblivious to the newly-placed “missing person” posters surrounding her. Posters showing a well-groomed young man in a suit with ginger hair.Bookmark here

MISSING PERSON – HAVE YOU SEEN ME? ARTHUR KINGBookmark here

“Good evening,” the cashier smiled, “what are y’ lookin’ for, love?”Bookmark here

“Just some sweets, crisps and fizzy drink,” Jackie said heading into the beverages aisle and grabbing a banana-flavored soda, before walking back to the cashier’s desk and grabbing a few bags of potato chips and a couple of small candies from the surrounding shelves.Bookmark here

The cashier winced as she grabbed the soda can to scan it. “How can you drink this piss?” she asked.Bookmark here

“It’s for my sister,” Jackie chuckled, reaching into her handbag for her wallet. “How much is that going to cost?” she asked.Bookmark here

“One can of banana fizzy drink, some bonbons and a couple packets of crisps… That’ll be £10.99.” the cashier replied.Bookmark here

But Jackie was no longer listening to the woman. Her eyes had drifted towards the poster behind the cashier’s desk. “Arthur…” she gasped.Bookmark here

The cashier glanced over her shoulder. “I’m sorry, did y’ know ‘im?” she asked apologetically.Bookmark here

Jackie nodded, tearing-up as she thought back to all the clingy voicemails she had left on her missing friend’s cellphone.Bookmark here

“Y’ can ‘ave this. Free of charge,” the woman smiled. “I don’t want t’ be botherin’ you, or anythin’.”Bookmark here

Jackie handed the money to the cashier and placed her purchased goods in a bag, before heading for the store’s exit.Bookmark here

“I’m sure your friend’ll turn up in no time!” the cashier called back as the automatic door closed slowly behind Jackie.Bookmark here

As Jackie solemnly made her way back to her apartment, the streetlights and high-beams of passing cars started to blur all around her as her vision became more and more teary. She couldn’t believe it. Arthur was gone and she had no way of knowing whether he was safe. As she wandered the streets she was met with what seemed like hundreds of posters reminding her of her friend’s absence. She pulled one off a streetlight and put it in her handbag. She decided that she’d ask around tomorrow to see if anyone knew where Arthur was. She stepped into the ground floor of her apartment building and hit the button outside the elevator. Stepping into the elevator, she looked up dejectedly at the flickering light above her head before hitting the button for the floor she lived on. She stood silently in the metal box as it carried her to her floor, the interior lined with the same “missing person” posters as the city streets. As the elevator stopped and the door opened, Jackie stepped into the fourth floor hallway and made her way to her room. Sarah had left the door unlocked since knew her sister would be returning. Jackie entered the room and looked over at her sister, who was sleeping in their only bed, still wearing her sweater dress from earlier.Bookmark here

“First come, first serve,” Jackie muttered, walking over to the couch she had slept on the night before and lifting her blanket off from the back of it. “Looks like I’m sleeping on the sofa again tonight…”Bookmark here

Jackie lay down on the couch, too lazy and distressed to change into her pajamas, and threw the blanket over her body, before removing her glasses and putting them on the nearby coffee table. She soon found herself in an empty white void. A dream. No one there except for herself. Herself and…Bookmark here

“Arthur!” Jackie called out to her missing friend who was standing with his back turned to her.Bookmark here

Arthur looked over his shoulder, opening his eyes and bathing Jackie in their supernatural red glow.Bookmark here

The man’s orange hair started to darken and grow out, as his clothes morphed into a full suit of armor. A sword materialized in his hand and he lifted it in the air and smiled with large fangs on full display. Jackie backed away slowly before turning to run in the other direction, as the man who stood where Arthur once was brought his sword down to her face. Jackie closed her eyes and put her hands in front of her face, bracing for impact, as the stranger and the white void vanished around her, before being replaced with a deep purple vortex. Jackie opened her eyes. Where was she? Was this a nightmare?Bookmark here

Jackie turned around to see a figure standing behind her. A woman with an hourglass figure wearing a black and purple mini-dress, striped pantyhose and pointed hat. No matter how you looked at it, they were dressed as a Halloween-style witch. The witch smiled at Jackie.Bookmark here

“Welcome to Phantasia,” they winked.Bookmark here 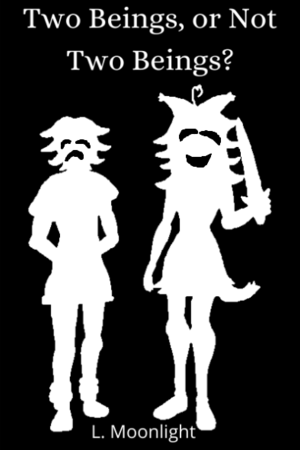 Two Beings, or Not Two Beings?