The Future is Mine

Kiran slid across the clay. His eyes were laser focused, as the racquet head brushed up against the hairy yellow ball. With his head perfectly still, Kiran twisted his upper body and followed through with the shot.Bookmark here

The heavy topspin ripped through the ad'-court and at the last moment dipped into the corner of the service box, catching his opponent off guard. Bookmark here

“Out!” The boy screamed.Bookmark here

“You have got to be kidding me, that was way in, I swear.” Kiran responded with outrage. It was match point for Kiran in the tie break of the third set; this point was crucial.Bookmark here

“I swear bro, you are such a hook, like of course you would call it out on match point. So, where is the ball mark?” Kiran thought he had the kid speechless. Bookmark here

The kid marched over to the corner of the service box all high and mighty. “See…see, this is the ball mark.”Bookmark here

“What? That is a ball mark from my serve, look how long and narrow it is.”Bookmark here

“Doesn’t matter what you think, I produced a mark, so the point goes to me.”Bookmark here

Kiran drooped his head in defeat. Both of his parents sat on the flimsy wooden grandstand behind the courts. Bookmark here

“C’mon Kiran… believe in yourself,” his mother called out in support. Bookmark here

Kiran clenched his fist with his racquet in his hand and raced toward the baseline to prepare for his next serve. Bookmark here

It’s alright, calm down. You have this, just believe... believe in yourself, Kiran!Bookmark here

The score was now six to five; this was Kiran's last opportunity to close out the match before the score would level out again. Bookmark here

Kiran held the ball up against his strings, rocked backward onto his right foot and then shifted his feet back together again, as the ball floated up through the air. Kiran dropped his shoulder from the trophy position, extended his elbow and reached up, as he pushed up with his legs and made contact with the ball.Bookmark here

His opponent split stepped and predicted that the serve would go to his backhand. Though the kid underestimated the sheer velocity and spin of the ball. Without enough time to prepare with both hands on the handle, the kid resorted to a backhand slice.
Bookmark here

Kiran watched as the kid let his top hand come off the handle and rushed the net, looking to take time away. Kiran pounced like a cat, taking the slice out of the air and flattening out the ball with his forehand into the other corner.Bookmark here

“Yes, I did it! Game, set and match.” The other kid chucked in racquet onto another court, before fleeing the scene.Bookmark here

Kiran pulled the bagger off the fence, dragging it with all his strength across the court, smoothing the clay out. As he encountered the balls, one by one, he picked them up and dusted them off with his white sport shorts. Kiran was covered from head to toe with clay. His white socks that went up to his knees were dirt brown. It looked like he had just come out of a dirt pit or quarry.Bookmark here

Kiran fetched his racquet; the balls were all in his pockets. The next lot of youngsters waited at the gate, waiting for him to get off. Bookmark here

Slipping past them with ease, Kiran rushed toward the tournament box, where the director was. He couldn't wait to report the score. Bookmark here

Kiran ducked under the grandstand, trying to take a shortcut. As he looked up, a tall boy of similar age stepped on Kiran's shoes, stopping him from moving. Bookmark here

Kiran fell onto his back, as he struggled to lift himself up.Bookmark here

"Punk. Consider yourself competition, kid." The boy lifted his shoe, before darting away, back into the crowd of people in the carpark.Bookmark here

This only made Kiran exude even more confidence after his win. Not only was it his first win at the Spring Valley Junior Classic, but he also got recognized. He was now on the radar, he was now a threat to the other players'. Competition, facades, trickery, predicting, determination, resilience, hard-work, fitness, patience and temper; tennis combined them all into one.Bookmark here

Kiran's passion evolved into love. It was that day, that Kiran vowed to become a professional tennis player, no matter what.Bookmark here 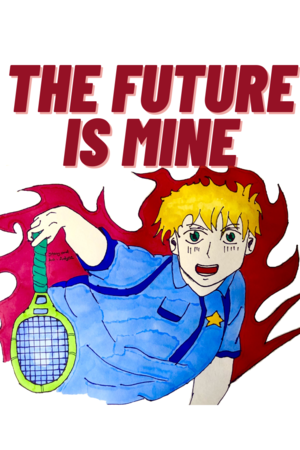 The Future is Mine