The Time I Got Reincarnated As A Seraph

In the beginning, There was darkness before there was life.

From the darkness, the first group of demons was born Zhongli, Datenta, Yomiya, and Wilith became the first primordials.

After 1,000 years of boredom, they started fighting each which caused a change in power.

Wilith was defeated by Zhongli and she now serves him from now on.

Another group was born and they shined brighter than any being and are seen as divinity.

One looked as beautiful as a divinely beautiful being, she is called Akina.

Her brother goes by the name of Diaros, the last sibling is called Loriana.

Diaros decided on making two a place to call home.

He said with a loving voice.

"Create a fundament made of clouds, so I and my siblings will live together as one."

The heavens are created then beings born from chaos are 2 beings, Yosaka and Shina.

They lived peacefully for 1 day until Shina gave birth to 20 beings that give off greater darkness.

Diaros grew sick and tired of them giving off the darkness, so he created beings that appear as half man and half bull.

That looks good golden, he also made undead which all number 6 legions.

Diaros give the half bull and half man creatures a giant ax and the undead the power to create an innumerable undead host from the chaos,

"Drive out these born beings from the chaos, so we may shine our light forever and ever."

His forces marched on but due to the opponents having opposite powers, they retreated from Diaros forces.

Yosaka and Shina went to their birthplace and started forging shields and swords.

Yosaka and his wife Shina went off to battle with their offspring.

So the 1st war for the realm has started.

The loyalties fought long and hard against the Yosaka and men.

Both sides used no grand tactics or ideas, just swing and killing as much of the foe as possible.

The 2 siblings, heaven and the chaos are shocked at this.

So they chose to depose the king for unfair judgment of those born differently.

A lightning strike made his power, authority go away and a different being walked and now reigned.

The other gods bowed and said.

"A different and more righteous judge has come among and we shall serve you."

The new god decided on the same as Diaros did and made the heaven then he began making servants.

He called them angels for they shall fight and deliver messages on his behalf.

One by the name of Lucifer, Lukas, and Oliver.

The second commander as follows is  Micheal.

The last is  Serna who is given author to decide on matters of areas of heaven.

After 13 days in paradise, Lucifer began to glorify himself and began to desire more than his given station.

Then he thought if he wants to compete with god, he told many things about his god Jehovah will strike us down for disagreeing and many other forms of accusations.

So many started to accuse Jehovah even the first gods Lorina and Akina.

They are on the side of the rebels, so loyal angels asked them.

"Please down and be judged fairly for the things that you have done."

But they refused, then they went from the mist of the host.

Many went to the armory where some convinced by his statements gave them weapons and amour.

So they started their march against god and Jehovah let loose his host.

War broke out in heaven, Serna and Michael fought against the accuser and his angels.

But due to his claims not being true and with the power of God, they lost their place in heaven.

With him having lost their place in heaven.

Lucifer said in a proud and vengeful tone.

"Why serve god when you can rule in hell."

So Jehovah permitted the chaos to give birth to demons just to serve Lucifer.

A light shined upon them and they all ran.

"One day, you all will be judged and be thrown into the lake of fire and brimstone while the worst offenders; will the tormented by the angels once captured."

This brought fear upon the rebels and Lucifer started making his ranks to rival his god.

Diaros and servants are in hell and he became a king as well as Akina and Lorina, so there are 10 kings of hell.

God decided on making co-rules that will serve him in honesty and truth.

"Let us make man in our own image."

He made man from clay and mud, then gave a breath of life; man became a living soul.

Lucifer saw and is not content with just watching.

So he went to earth and took the form of a snake, he asked.

"Do you wish to become a god-like the first gods that is older than the one you know of?"

The snake used his head and took a fruit born from the chaos which is like the replicate of earth.

"Eat this and you shall know the truth and side with us, to show how cruel this new god is."

She ate and the woman gave it to his husband and he did eat.

Jehovah saw and sent his angel with gave a sword made of lightning mixed with the flames of judgment to banish man from heaven.

" You will be a rebel and a fugitive from hell, who will be punished threefold for the crimes you have done; A man upright will be born and he shall crush your works and debts on earth."

So the snake cannot enter hell but he is permitted to order his follower on what to do in his attempts against man and the host of heaven.

After 2,000 years of inactivity, the Darkness became isolated and a separate domain.

The darkness created the second group of Primordorial, they are Blanc, Vert, Jaune, and Noir.

3,000 years passed so Serna started naming  Zhongli Rouge, Datena Bleu, Yomiya Marron, and Wilith  Blonde which changed their appearance and they decided on returning to their previous form.

The second group of primordials appeared within the hell and took form.

Violet, Blanc, Noir, and Jaune started fighting against each other like their 1st generation. 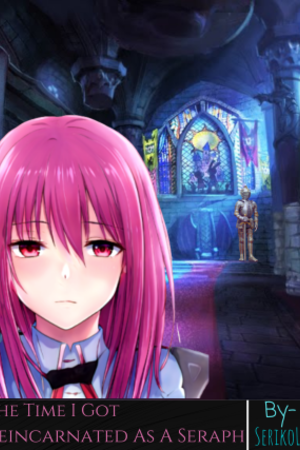 The Time I Got Reincarnated As A Seraph