I remember the time before I entered the backrooms. It was a time when I was less jaded; a time when I was more carefree. I was broke - no - dead broke. Working for the state got me decent benefits, but living alone in California on such a small paycheck only afforded me the luxury of occasionally hitting the bars. I’d drink, make friends, and sometimes even hook up. It was a hell of a life. Even though I knew I would be forgotten when I died, I didn’t care. I found peace in the fact that I could simply enjoy life and disappear.

Occasionally, my lifestyle got me in a bit of trouble. Sometimes I would hook up with someone to later discover they were already involved with someone. I’ve been beaten up a few times. Enough times, in fact, that I have begun to carry a small, foldable pocket knife on me at all times. It’s ironic, really. The way I used to live put me in danger, only to later save my life. I digress.

One night, I was particularly hammered. I was nearing that specific point which when passed would not allow me to remember the rest of the night. However, what happened that night was completely unforgettable. It’s what put me on the bizarre and dangerous path I have been on for the past several weeks. The beasts, the liminal spaces, the close calls, and the unlikely friends were all from this one night.

I left the group I was with to use the bathroom, and someone followed me. He gave me bad vibes. The man was tall, strong, heavily tattooed… just really everything that would generally shout “DANGER” at you in this situation. I got my ass in a stall and locked the door. After relieving myself, I waited. Upon hearing nothing, I exited the stall, stumbling directly into this dude’s pecs. In my head, I saw the equivalent of the “Current Objective: Survive” HUD. When I tried to make my way to the door, however, this guy had other ideas.

“Where do you think you’re going?”

“You’ve just been waiting to get a chance to say that, haven’t you?”

These last few words were chosen very poorly. Immediately, I received a stout punch to the stomach and crumpled like wet cardboard. I vomited on the ground. However, he really wasn’t in the mood to let me get a chance to rest. The man picked me up and held me against the wall. I was screwed.

“Who the hell do you think you are?”

“I’m a broke loser. I’m just a loser that barhops sometimes! Put me down!”

“Bullshit! Why do you think you can sleep with my wife?”

He pulled me off the wall and slammed me into it again. That’s when it happened. Although I couldn’t fully process everything that occurred, I knew that what I felt as I clipped through the wall wasn’t normal. It didn’t feel at all like getting slammed against a wall or anything even remotely like that. For a split second, it was like my perception was altered; everything was a series of three-dimensional volumes that both layered within each other and overlapped. It was as though one of these overlapping spaces was empty, allowing me to slip through the wall of the bathroom in the bar.

Then I landed on my ass. Before I could get my bearings, I noticed the oddly familiar piss-yellow wallpaper. The fluorescent buzz almost reminded me of a headache, and the floor was carpeted but also… wet? I got up and brushed myself off, vaguely disgusted.

“Holy shit how much did I drink?”

My words had no real direction. As I looked around, I saw that everything was empty. No furniture. No decorations. Just piss-yellow wallpaper and nasty carpet. I reached into my jacket and pulled out my phone. No signal. Shit. I looked around but couldn’t really see an exit.

“My boss is gonna kill me.” 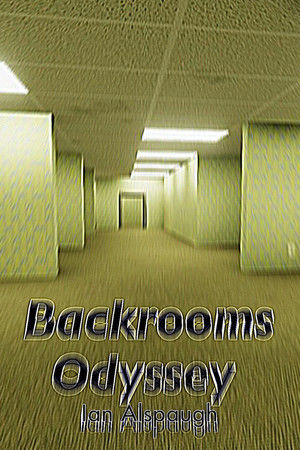