Death To The Furies

In the city of Praud, even the cobbles clamour for death. The gutters run red with wine and blood alike, and one whiff of the air will set your synapses firing on the worst—or best—drug trip you've ever had. This hellscape reeks. Bookmark here

It's where they send the dregs of the universe, after all. The departed souls of murderers, war enthusiasts, those who have violated the Geneva conventions, pick-pocketers; souls that even Urd herself has deemed unfit for reformation. These souls are here to rot for eternity. Death is to them as immortality is to us: the holy grail of all drugs, the trip of the century. The glint of the philosopher's stone. Reality made legend.Bookmark here

The wheels are turning, gears clicking. Time never grows short in Praud; it only turns shallow. A robed figure in a brick-and-mortar cottage pores over a manuscript into the dead hours of the night. The paper is cheap, and the edges keep coiling back. The figure scrambles to hold it down, but his fingers are getting weaker, oilier. There is dirt under his nails and there are wrinkles running down his chest. The pursuit of knowledge is all he knows. He hasn't slept for a year. Bookmark here

Eternity is a long time to suffer. Bookmark here 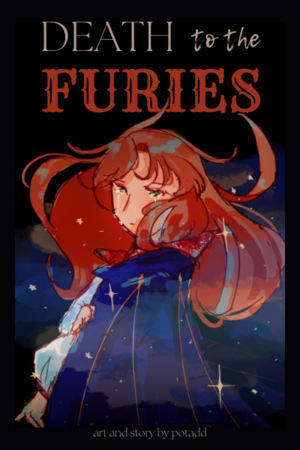 Death To The Furies