“Balam… Take care of everyone in my place…”

I wake up in a cold sweat. The only things that greet me are the flickering flame and the sounds of the night owls yet again. Every time I lie down, that same sequence appears in my head. How many years has it been? A thousand? Two, perhaps? He had entrusted everyone to me and yet… look at me. Pathetic. In this form, I have to replenish my energy by eating and sleeping like a normal person, but I haven’t gotten an actual good night's sleep ever since. What would he think of me if he saw me right now? What would my comrades say?

I instinctively reach for my staff and grab onto the seventy-one crosses hanging around it. They can’t even see or hear me right now. Without a proper soul to undo their seals, they’re nothing more than fancy knickknacks. I know that, but… everyone, please. If you’re in there, give me strength.

As the sun starts to show itself beyond the horizon, turning the sky into a fresh and dazzling red, I resume my journey once more. I walk through the green meadows and plains, along the rivers and over the hills. My destinations? I don’t know. I was never given one. “You will know once you arrive,” he told me. But I’ve never felt it, not even after millennia of walking.

A rumbling in my stomach stops me in my tracks. Ugh, this is what I hate about this body. Frail, weak, and prone to shut down at any moment. I can never get used to it, no matter how long it has been. From afar, I can vaguely see the structures of a settlement, but I doubt I can make it with my current stamina. Looks like it’s another day of camping outside for me.

I plant my staff on the ground, putting power into my arms. As cracks form on the ground beneath me, a golden light erupts from below, engulfing the lone creature at the scene – me, and as the cracks widen, a bud starts to grow. The bud then bursts forth in a matter of seconds, growing into a full-fledged tree faster than one could blink. And just as quickly, from the tree that was just formed, flowers bloom and wilt in mere moments, taking their place immediately are big, plump fruits ripe for the taking.

It takes a while to pick all of the fruits on the tree, but it’s a much-needed process. As convenient as a spell of this caliber can be, magical energy still comes from the wielder themselves. Spend too much on something like this, and your meal will not even be enough to recover the cost. My regeneration is better than the average magus, however, so I can afford to go a bit over what I need. The extras will serve to be good reserves and might even be used for trading later on.

“Tch, still sour.” I take a quick, unpleasant, bite to replenish my energy and continue my way towards the nearest town.

The small town appears clear within my sight just when the sun has reached its peak. However, it doesn’t seem like I will be getting much use out of this place, as even from here, still quite a while to its entrance, I can already see wisps of smoke coming out from the buildings inside. Millenia of traveling, and yet things still stay the same. The ravages of war continue to follow me everywhere, from large empires to even this tiny village in the middle of nowhere… I don’t know if I should laugh or cry about it at this point.

“Just my luck, I suppose.” I let out a sigh to myself and continue on my path. I have to go through the place anyway, so might as well see if there are any tools or valuables that I can take. I doubt that there’s anything left for me, though.

The town up close doesn’t get any prettier, to my expectations. Debris everywhere I stand, charred planks and sticks from what looks to be the remnants of barrels and carriages, stains of dark, red blood that has dried a long time ago, and this irritating combination of smoke and metal… definitely not something that I would take pleasure in staying for long. The houses – at least, those that are still somewhat intact – all have their doors wide open, naturally or forcefully busted, which further confirms my assumption from before. Another bust, huh?

“You!” A sudden rough and hoarse shout interrupts my thoughts. “With the fur coat! Stop where you are!”

Great. I’m really not in the mood today.

“You deaf or something?” The voice sounds once more, and standing in front of me now is a group of men in simple, if not poor and dirty, clothing, each armed with a bloodstained sword. The bandits that had just raided this place, if I have to guess.

“Gentlemen,” I wave my hand to chase them away like I would a wild animal, “today’s not my day. Can you be so kind to not bother me? I can’t promise I’ll be easy on you otherwise.”

“What did you say, punk? I’ll kill you!” Like the barbarians they are, the group of men charges at me almost instantly without a second of thought.

“Hah…” Letting out a sigh, I loosen my sore neck and shoulders, preparing myself for another massacre, “you asked for it.”

As I tap my staff on the ground, cracks on the earth and a golden light engulf the area around me yet again. However, this time, it’s not a peaceful fruit tree like a while ago. Hundreds of roots and branches erupt from the cracks, each having the length of an anaconda and a tip as sharp as a well-forged spear. In a single command, the army of snake-like roots thrashes and pierces through the enemies in a cacophony of rumbling earth, crushed bones, and ripped flesh. Only a few seconds have passed since the group decided to strike me down, but what’s left of them is already nothing more than a pile of blood and torn bits of unknown shapes and sizes.

“Bunch of lowlifes.” I click my tongue in annoyance, making my way through the mess that I’ve just created.

In a sudden turn of events, as I’m just about to leave the otherwise dead town, a large crashing sound alerts the area. By the way the object in question breaks, it must be a ceramic vessel of some sort, but what intrigues me more is not the object, but the cause of its destruction. For a pot or vase to break like that, there must be something… someone around. A leftover bandit that got scared of my showing earlier? Or a survivor accidentally revealing their hiding spot? If it’s the latter, then maybe I can see if I can get anything from them… Sure, it’s worth the shot.

I make my way towards the scene of the crime – a rather small, but otherwise normal house in a raided town. Its half-burnt door can be seen lying inside, while the walls are littered with holes and cracks. As I take a step inside and take a look around, I can see bits of dark brown shards lying just to the right of where the burnt door is – what looks to be the kitchen.

Someone has turned the dining table around, utilizing its surface as a makeshift shield while the owner can stay safe behind. That explains the breaking sounds earlier too, if you look at the directions of the shards – all of the pieces seem to have originated from this table in front of me. Not a terrible idea, but the owner was careless to not put away whatever the shards were. The sound would surely prove to alert the bandits if they were alive. And not to mention, this table is quite small. A single adult might be able to barely hide themselves, but if this was a family then surely, they would have chosen a better hiding spot, would they not?

“I have you now!” A sudden shout sounds from behind me, and before I could realize the situation, from my back, a sensation of a stabbing knife runs through my nerves. Or at least, that’s what would have happened if the perpetrator hadn’t been so bad at handling a knife that they would fail to even graze the hide cloak I was wearing.

I turn around to see just what kind of failure of an assailant I’m getting myself into, only to be found more surprised than ever for the day. In front of me are three kids – two boys and a girl. The girl nervously hides behind what looks to be the oldest boy, who is desperately holding on to an old, rusted shield that is almost as large as his own body. Meanwhile, the perpetrator of the earlier attack is the other boy, who looks like the youngest of them all. Still holding the small knife firmly in his tiny hands, the blonde boy jumps in front of his big brother, much to the latter’s dismay and worry, and shouts at the top of his lungs:

“I got you right where you are, fiend! Don’t move another muscle!” 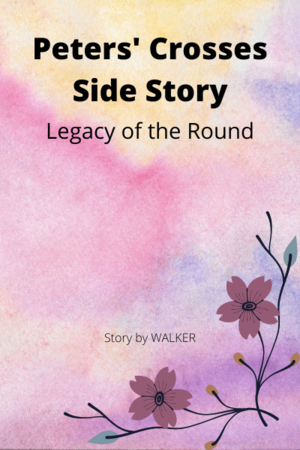