The Writer's Illustrator is Stuck in Cookie Cult (LN)

Alright. With this, I’m done.

I stuck my stylus back in its holder.

[“Novelle, the cover art for the third volume is complete, please take a look.”]

I took a rough screenshot of my monitor and sent the image over via the system. You know, the kind you see in LitRPG stories? It’s not mine. I actually borrowed it from Novelle’s brother.

[“Thank you! Now, go check underneath your pillow. I left a little surprise for you.”]

Turning away from the monitor, I looked towards the bunk bed. Novelle owns the top space, I own the bottom. She tucked something under my pillow? Since when?

She and I have been living in this 2-person dorm for a year now. Here’s a fact: Girls and boys aren’t supposed to share a room. Coincidence? I think not. She must have done something to make this happen. I’m not angry about it though. If anything, with her here, it’s been quite pleasant.

We’re a writer-illustrator duo. I do the art for her story, and she does the writing. We compliment each other. Not to mention, Novelle is a crazy good writer. Her works get thousands of reads each chapter, if you can believe it.

I’m her current full time illustrator, which means her fans also pour over to my profile. My SNS exploded during the first launch of her second web novel series, which I did the illustrations for. I’m fortunate to have met someone as talented as her.

She, a writer, I, an illustrator. We’re like bread and butter, and our future is pretty much set.

I got up from my chair and walked over to the bunk bed, but not before I took a peek at her laptop. The cursor was blinking, words strewn on the page, it had been left like that for a good half-an-hour now. She’s the kind of person who hates the auto sleep mode of her device so she turned it off.

<Cookie Cult>, her latest project. She's currently serializing her 2nd volume. It has all the ingredients needed for a good story. Complex world building, deep character backstories. I’ll admit, even I’m a fan of her work.

Leaving her desk, I came to my bed and pulled up the pillow.

It was a letter.

I turned it over and examined it. Nothing out of the ordinary, she even sprayed some perfume on it.

I carefully opened the flap and took out the content. A piece of paper.

I felt time stop for a moment. My heart didn’t fail me though.

I think we’ve been aware of each other’s feelings a long time ago. To think she’d actually confess.

It’s a lie to say I wasn’t elated. Though, I feel that I should’ve been the one to initiate it.

No point fretting, I can’t turn back time. I’ll make up for it by telling her in person then.

I folded the paper, tucked it back into the envelope. After returning it under the pillow, I went to take my coat.

Novelle went to the nearby convenience store to buy some groceries for dinner. I’ll go meet her at the intersection.

I took the elevator down.

The cold air of winter assailed my face as soon as I stepped out of the lobby. I tugged at my jacket, placing both hands inside the side pockets.

The convenience store should be..

I had to walk a couple blocks down the street. I saw a few couples holding hands along the way.

I’m feeling love in the air. Funny, no. I’m serious. I can’t wait to meet her.

The blinking traffic lights, passing cars, the evening city skyline. Everything felt vivid and vibrant. Blood was getting to my head. Calm down.

I finally reached the zebra crossing. There across this street was the grocery store. The green man came on, playing a chunky walking animation as ringing sounds echoed.

I raised my head and saw Novelle waving over at the other side. Her black hair bounced and shimmered under the city lights, one arm holding onto a paper bag.

Bystanders zoned out of my focus as they walked ahead. I smiled ever so slightly.

She came running. I took a few steps backwards in preparation to receive her glomp.

I heard the blare of a horn.

The shouts of the onlookers.

The impact of a crash, the shattering of glass.

I saw blood pour over asphalt.

I fell to my knees.

And everything went to black.

“The last thing I remember was.. Novelle’s corpse,”

On a park bench, I watched as the night clouds drift across the abysmal sky; The city skyline different from what I remembered. Twilight ending in the distant horizon. The only source of light was the orange street lamp just above us.

I turned to hir– Pu’er Julis.

The word <Novelle> is what you could call a <true name>. Since Pu’er didn’t react to that, xe’s probably not the person I’m looking for.

“I don’t believe you.. you take back those words. Or should I punch some sense into you?”

“You can try, but I doubt you can achieve anything by doing so.”

There’s a very good reason why I’m doing this. It’s selfish, I know, but finding Novelle is a priority here. Hirs existence will only interfere with my life.

I gave hir a side-glance, and saw hir staring at me in silence.

I should go in with the finisher.

I got up. If there were spectators, this would’ve looked like two middle school kids breaking up with each other.

“W-W-What nonsense! You.. you get back here I’m not done with you!”

“You promised me in our last life!! Don’t tell me you’ve forgotten!!”

“But this isn’t me. We’ll never absolutely resolve this war. That’s why it’s a worthless cause. And I know you well enough to know that you won’t give in. And that’s why, this is goodbye.”

I have no memories of his past life in this world. But what I do know is:

Two existences that aren’t supposed to be together, working towards a common goal.

And worst of all.

dotturndot: No, hir and xe isn’t a mistake. Let me tell you, I’ve had to invent words for this series :D .Putting that aside, this will my 6th series. My previous series is still ongoing, but it’ll come to an end soon (has already ended for my patrons).13 volumes, 300+ chapters (excluding chapter counts for extra volumes). That story is a bust.

It’s for you. Not all of you, some of you. Please continue a couple chapters, and if you’re the one, I hope you will join me on this adventure together! And for those who came from MDQ, the stories coincide somewhat. LORE!! 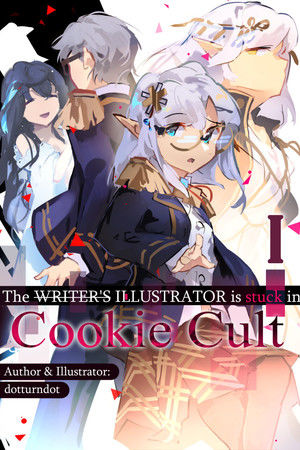 The Writer's Illustrator is Stuck in Cookie Cult (LN)