Underneath the canopies of concrete and vines of hanging copper cables are the beady eyes of a lesser dragon. It's definitely a C rank, likely a type 5 judging from its proximity to the Equaliser. Avett's not taking chances. It might turn out that it's still in the grips of early infancy—it could be knee-deep into its teen years for all he knows—but it's still a fucking menace and a bitch to exterminate. In the time that he's had to collect his thoughts, it's already slinked off elsewhere. Bookmark here

Out of sight, but certainly not out of mind. Bookmark here

He curses and moves on, keeping his body lowered and pressed against the handrails of the escalators.Bookmark here

Both of his hands are firmly on his blaster. All Avett hears are the ambient noises of the nearby forest, the occasional whistle of the early morning breeze, and the obnoxiously loud crunch of pebbles against the concrete at his feet. Shit. He's never been light on his feet. His mom used to tease him about it for days back in his single-digit years. His dad had bought him these hard-soled house slippers, and they'd slapped against the wooden floorboards all the time, keeping the entire household up in the process. Bookmark here

He peers over the handrails, aims his gun at the sulking mass of inky tendrils, and fires at the growth of white gauze. The dragon is dead before it hits the concrete. He'll have to work on his footsteps later, but it hasn't screwed him over yet. It's not fair that his mom's still right, even after all of these years.Bookmark here

In a wild series of circumstances and events, Avett finds himself at the epicentre of what appears to be an incredibly high-class department store. As he steps out from behind the escalator, he's greeted with an open ceiling and the unrelenting glare of the Earth's sun. The glass dome that rests above him is surprisingly intact. A lot of things are, in fact. The fast-food counters are made out of marble, and they're not cracked or scratched in the slightest. Just dusty. It's more abandoned than evacuated. Bookmark here

This seems like the perfect place to reestablish society. It's nostalgic, familiar, and it's got tons of resources—he's seen what some of the stores have had to offer in the brief glimpses that he's taken on his way in. All of this sounds way better than a clearing in the middle of a forest. Bookmark here

He turns a corner and slings his backpack onto the counter. This is some kind of supermarket, he's aware. There are condoms on sale at the checkout; he leans over and pockets like four of them. It's not shoplifting if no one's around to see it.Bookmark here

Something rustles behind him. He flinches, flicks his blaster into his hands, and points at… nothing. It's not just the wind because the ceiling's sealed up here, and the breeze hadn't even been strong enough to rattle the chunks of asphalt against the concrete. It's not a dragon either—or at the very least, it's not Equaliser spawn. Bookmark here

The bluff works. She's doing the thing that makes Avett's insides feel funny where she laughs from the deepest parts of her belly. He wonders if he should lower his blaster or point it at himself.Bookmark here

"There's no way you need all of those," Mari says as she comes into the light.Bookmark here

He slips his blaster back into its holster. "I collect them. I like how the boxes look."Bookmark here

Avett swings his backpack over his shoulders again. There's a smile playing on his lips, and for a brief second, he feels like a fucking king. Like he's the first kid in a class full of geniuses to put down his pencil, flip over his test, and lean back in his chair. Stars, how he's missed little interactions like these. Lilith would've seen and ignored him. Auren likely would have done the same. Ysh'vanna would have lost it and pulled the condoms over his head. He's not allowed to have fun aboard the Winnow because they're all stuck-ups with silver utensils shoved deep inside their anal cavities. Bookmark here

"What do you mean, 'really?'" He shrugs and walks into a random aisle. He hopes he's in the preservatives. "That's all they're good for, right?"Bookmark here

A snort. "Best to keep them as family heirlooms. I'd check the expiry date if I were you."Bookmark here

Onset, palpable fear. Avett shoves a hand into his pockets and brings out a box. The black numbering on the side shows that it's at least a year past its best-by date. Bookmark here

He whirls around. "Condoms on Earth have expiry da—?"Bookmark here

There's no one behind him. She's just gone. Bookmark here

He takes a few cautionary steps forward. The supermarket's tiling is so brittle that he cracks one clean in half with his heel. He calls out her name. He calls out her name again, this time slightly louder. When she doesn't answer both times, he starts walking faster. His heart is pounding, ready to leap up and out of his throat at any damn second. Bookmark here

Again he calls her name. Again, she doesn't respond. Avett can only assume the worst. Bookmark here

Then—a flash of brown leather. The tinkle of her zips hitting the supermarket railing. Mari comes out of the aisle next to the one he's in. She's in front of him now, and she's got the biggest shit-eating grin on her face, one that puts the one that'd been on his face not five minutes earlier to shame. Bookmark here

"Cans are this way," she says. There are black spots in his vision when he looks at her, but they're slowly starting to recede back into whatever hell they'd come from. "I just walked into the aisle next to yours, and you just started screaming my name like I'd gone off and died."Bookmark here

Then she sees his expression. He probably looks like shit. He feels like shit. It's like he's just been unwillingly ripped apart and exposed, kind of like soft citruses in the hands of a starving child.Bookmark here

He slides a hand over his stomach and clenches his hands into the familiar warmth of his navy-blue jacket; Mari catches him doing it, so he rounds the corner and enters the aisle of preservatives without giving her a second glance. Bookmark here

"It's magic," she says, a bit after. She's still on the other side of the aisle; Avett can see her painfully still face from over the tops of the cereal boxes. "I'm using a glamour to hide the sound of my footsteps. Obviously, I'm not too good at it. I can't hide anything else."Bookmark here

He tries his best to ignore the piles upon piles of rotting fruit displays and decaying herb pots that haven't seen the blessing of light and water in a while. It seems counter-intuitive for one side to need daily maintenance while the other might as well go half a decade without needing to be replenished. Bookmark here

It's almost retroactively funny, actually. Just like how he'd freaked out over absolutely nothing at all.Bookmark here

The rest of the outing is pretty awkward after that. But when he comes back with a backpack full of jars of pickles and soft chickpeas and corn, the villagers seem elated to know that the Kattish man isn't out to kill them all in their sleep anymore. So he's fine with feeling like someone's just twisted a knife into his stomach, he guesses.Bookmark here 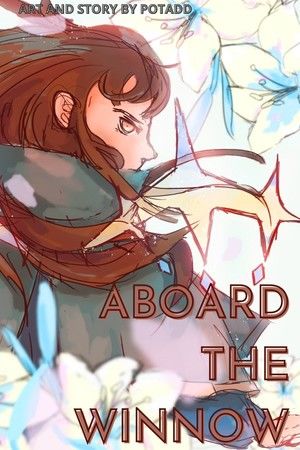