The work was dangerous, rankers abused him, made fun of him, and to make the matters even further worse, the pay was pathetic. Bookmark here

If it weren’t for the debts his parents left to him he would have already quit by now and lived his life like a regular person. Unfortunately, for someone like Yuuki, in his mid-twenties and lacking any tangible job skills, there was no other way but to remain as a Ranker’s mule, if he wanted to pay off his parent’s debt of a million yen. Where are his parents you might ask? They already died working as the ranker’s mule and all he measly got was a letter of service his parents did and ten thousand yen. The best he could do for his parents was to use the ten thousand yen he got for their burial. The ranker’s association did nothing for the non-rankers and only kissed ass to the rankers. Bookmark here

Should one say that he had no choice in the matter? He could have simply run away one might say. But no, he chose to stay because he had a dream, a dream that one day he would revenge on the Association and the Rankers that treated the non-rankers poorly. That was why, even though he didn’t want to, he simply had to participate in the raid supervised by the Association. Bookmark here

Rankers operating within the same district tended to know each other pretty well. As the raid portal opens up, rankers will be notified and thus Rankers in that district would come to take the job. Bookmark here

The Rankers that arrived early would be seen sitting down in their gears while choosing the mules they want to take to the raid. Usually always the strong and the big get taken quickly so rankers would come out early to take the best. The rankers would enjoy their coffee and teas handed out by the Ranker’s association and shared their greetings with each other. While the mules would just be out in the cold with nothing. Only to hope that they will get selected so that they will get to work and if lucky get fed.Bookmark here

“Hey! Watch where you step you bitch. You stepped on my new armor. This armor is worth more than your family.” One Ranker said to the non-ranker as he is getting beaten.Bookmark here

All the non-rankers could do was stand there quietly and watch their fellow friend or even family member get beaten and all the Ranker’s association would do is just watch and if it does get serious to the point where they are almost dying they would intervene and just apologize for their untidiness.Bookmark here

Someone points at Yuuki and points him to the cargo. Yuuki quickly gets his stuff and goes to the cargo he pointed at. As he was one of the lucky to get selected he quickly heads over to a table where non-rankers can get fed. As he runs he sees nothing. All the food was gone and only water was left. Thinking that he was still lucky he fills his stomach with water.Bookmark here

A woman hands a bread to Yuuki and greets Yuuki. Her name was Yurina Suzuki and her voice sounded warm as the log fire next to him. Bookmark here

“You must be our non-ranker, pleasure to have you here. Hope you can be a great help to us in this raid! If anything goes wrong be sure to rely on me!”Bookmark here

She gives out her hand to shake and you can see the number 69. Yuuki slowly put his hand out and shakes her warm hand. He thought he was lucky to join a group that had a nice person and was crazy to see such a high rank being nice to him. Bookmark here

In this world the lower the number, the stronger you are. And it was rare to find even a number less than 10,000 in a free raid where a guild wasn’t involved. Usually, the Rankers that are lower than 10,000 are all in a guild and have what you call spirits with them. Thus, they are treated even more special.Bookmark here

Sadly, if a guild was not involved today, that meant there wasn’t enough profit to be had, and usually the rankers that aren’t in a guild would be happy because more money would be made for them and non-rankers would barely make any money since it wouldn’t be evenly distributed or maybe not even distributed at all. However, it meant that the raid’s difficulty would be low and the non-rankers wouldn’t have to fear that this might be their last day.Bookmark here

As every Ranker settled in and the number was met one man with a suit stood and briefed the detail of today’s raid. As the meeting was settled the Rankers all stood up and started to walk while the non-rankers all proceeded to grab the backpacks with tools, equipment, and potions. As we entered the man in the suit bowed down and says, “We wish you the best and wish you all come back safely!”Bookmark here

As we entered the portal all we saw was darkness in a cave. It was quiet and all we could hear were droplets of water coming down from the ceiling and the sound of armors and equipment moving around. Bookmark here

“Hey, hand me a torch”Bookmark here

You hear some rustling, someone trying to search in their backpack.Bookmark here

“Hey! I said hand me a torch!”Bookmark here

“Sorry… I um… I think I forgot to pack it.”Bookmark here

The Ranker gets mad and in frustration starts to beat up the non-ranker.Bookmark here

“I can’t believe I picked an idiot to handle my things. If anything happens just know you are going to be the first to die.”Bookmark here

The non-ranker cries and pleads to forgive him while he is getting beaten to death. As this happens Yurina happens to walk up to them and hands a torch to him.Bookmark here

“Stop beating him up, he’s a human too you know. Just like you. Here, take my torch.”Bookmark here

The man stops and gasps for air while the non-ranker lies down there in pain gasping for air to breathe. As he is about to say something he sees her hand with her number and becomes quiet. Yurina treats him and apologizes for his rudeness to the non-ranker barely living. Bookmark here

“Thank you, miss.” The non-ranker says while crying and holding onto her.Bookmark here

She asks her guildmates she was teaching today to help her pick him up and help him. We continued to proceed and as non-Rankers, we saw the Rankers do their job defeating the monsters and us non-rankers picking up loot and mining special ores. Bookmark here

As Yuuki was mining, a monster comes out behind him, and just as it was about to pounce on him,Bookmark here

A green-colored bear spirit comes out knocking the monster down and sees him viciously tearing it apart. Yurina quickly comes to Yuuki and asks,Bookmark here

Yuuki could do nothing but just stare at her in shock and slowly nods. As this was happening you hear other Rankers quietly whispering to each other seeing how powerful she was and first time seeing a spirit being called in action. Out of the blue as this was happening a non-ranked screams Bookmark here

“Uh, Hey, something is happening over here.”Bookmark here

“Huh, is this some kind of a hidden entrance?” One Ranker said.Bookmark here

“Maybe it has secret loots that no one ever saw yet.”Bookmark here

The portal was black. It was the first time ever anyone saw a portal colored black. Everyone was getting curious and was hesitant if they should enter or not. Yurina walks up to it and advises everyone that the guild should handle this and that it should be reported to the Rankers Association. However, one of the Ranker says out loud.Bookmark here

“Nah, you aren’t taking this away from us. We found it.”Bookmark here

As one of the Ranker said this, things became messy, and hear others saying yeah, this is our loot we are not going to give this opportunity to get away and let the guild take all the money. As things were getting hectic one of the Ranker pulls a non-ranker.Bookmark here

“I told you, you are going to be the first to die right?”Bookmark here

The Ranker throws him into the portal and all you can hear is him screaming in despair. Everyone stood in shock and a few seconds later an arm comes back flying out full of blood. Everyone starts to scream and the ground begins to shake. Everyone starts to panic and you see a beast slowly coming out of the portal with eyes all around his body with 8 arms.Bookmark here

It was covered in blood and as it came out slowly everyone stood there panicking not knowing what to do. One Ranker started to slowly move away from it but the beast started to scream and knocked him away. As this happened everyone panicked and started to run away. Yurina summons her spirit but her spirit gets ripped in half right in front of her. She quickly runs away and as Yuuki was behind her trying to desperately run away the monster slowly catches up to them and she looks behind. She looks at Yuuki with a disgusting smile on her face and casts a spell to knock Yuuki over.Bookmark here

“Please, please! Don’t leave me. You told me I can rely on you!” Yuuki desperately said with his hand reached out.Bookmark here

“You non-rankers are nothing but a tool. You should be honored to die like this. To protect me!” Yurina says looking at Yuuki with a devilish smile.Bookmark here

The entrance door begins to close and Yuuki on the ground nothing but a pickaxe holds it up and starts to cry. He begins to think about the hardship he had to endure and how life was unfair and that only if he was stronger he wouldn’t be in this position. He thought to himself in anger,Bookmark here

“Why. Why does life to be unfair? Why does it have to happen to me?”Bookmark here 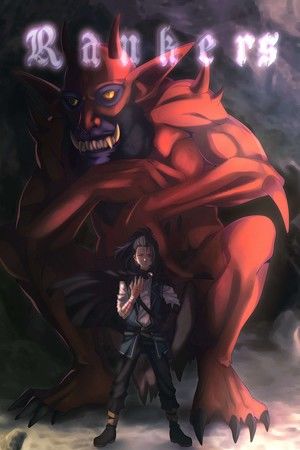