See You Centuries Later, My Angel

Do you believe in God?

I looked up and saw a beautiful creature surrounded by falling snow. Magnificent under the moonlight, with hair reminiscent of the sky and sea. Their wings fluttered with such gentleness.

They smiled. Hovering above me was an angel. Or at least, they must be, with wings imitating those seen in drawings and an aura that radiated light.

Their crystalized eyes carried hope and curiosity, and I was fixated on them.

That's right, I heard their voice echo within my mind, God- at least- that's the name given by humans.

The angel leaned in, but not before playfully poking my nose, What's God to you?

That's a good question, I thought. It didn't matter that I hadn't spoken, it was obvious even to a child like me that this being can hear it all.

To some, God is part of their religion, they caressed my cheeks and held my face up, to others, God is an idea. Maybe God's not real, or maybe God's in what humans use in a phrase- something like...'Oh my God!'

"Yeah, Mommy says that all the time!"

Mhm, the mysterious angel silently giggled with me, their wings flapped against the chilling air of winter.

"Hey," I blinked and finally asked them the question I've been craving answers to, "How come I can see you?"

It happened during the dead hours of a snowy night. I was five, probably six when I sauntered down a lonely alleyway inside a deserted neighborhood.

It had been a couple of hours since my parents fought, and in an impulsive rage, I ran out of the house before my brother could catch me.

I didn't know the world was bad. When I was a kid, I didn't think of consequences.

I just wanted them to stop fighting, to stop the screaming and the unnecessary hate spewed across our rooms. It wasn't fair, I convinced myself, I wanted to leave and never come back.

Not to a home where our parents can't love each other.

That phrase, I wanted to tell my brother so badly, but I was scared. Instead, I only caused headaches for him. I knew he was looking for me. Yet as a young boy himself being 3 years older, it was unsafe for him to be wandering in the dark as well.

You'd think our parents cared, but they didn't. And nobody bothered to check in on us.

In this world, it was just me and my brother.

Until that night feelings had escalated and I couldn't take it anymore.

And so, I ran away. A young soul deprived of innocence and healthy relationships, all I wanted was to be free and away from everyone.

I ignored my brother's calls and my mother's threats. My father, too anxious to speak up, said nothing.

After a couple of hours of wandering deep into the desolated streets, all I could see were the decorations hanging from people's homes, filling their windows with color and personality. An inflated reindeer, then several gnomes glaring at me, then a giant Santa Claus peaking from the bushes.

The neighbors are getting creative.

When I reached the park, I finally took a deep breath and collapsed next to the slide. It was lightly coated with a thin layer of snow. Out of boredom, I laid my hand on it.

Making a handprint... it became my way of passing the time.

I didn't know how many times the clock turned its handle. All I knew were the clustered thoughts in my little head, begging for a police officer or a firefighter to come rescue me.

Perhaps it was God that heard my prayers, because I nearly fell asleep, only to be jolted awake to the presence of an angel.

Then the rest became blurred memories.

DelusionL! officially debuts on May 7. 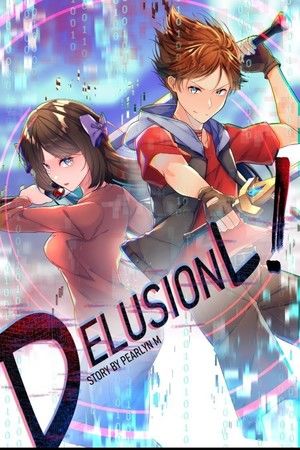