Go For a Punch

“Most ****ed up thing you’ve seen on the deep web,” simply stated a 4chan user, sparking up a new internet thread…

4chan: An old imageboard website where people could anonymously post about pretty much anything… It’s usually known for the spread of many myths and lies. Probably the most untrustworthy online source in the world.

“Nothing I can’t find on the regular web : /,“ mockingly texted Anonymous.

“Posting about the deep web eh? So when’s your 13th birthday? Exciting getting older isn’t it?“ weirdly texted another Anonymous.

“I’ve seen a video of a man tortured in front of his own family, eventually killing him,” said Anonymous.

“I once saw the shooter’s perspective in a massacre. Boy, do I regret seeing that,” said another Anonymous.

“I once visited some strange website that was trying to invite me to some cult. Not gonna lie, I was a bit paranoid the next few days,” answered another Anonymous.

Many continued to mock the person coming up with the thread. Others claimed to have seen things like gore, torture, and etc; unsurprising, especially when speaking about the deep web. The deep web is the pages of the internet you never touch, hidden, but left in somewhat plain sight. They are hidden truths, yet revealed secrets. A place only a select number of people would even dare to search through. It may bring you to the dark web, which pages are purposely meant to be hidden whether it’d be dark secrets or illegal activity. A place that seems dangerous that many people would agree it’d be better not to explore. It’s like reaching the bottom of the iceberg. Perhaps, it’s how one’s curiosity could turn on them. Perhaps, it’s a secret to life entirely. Perhaps, it’s the biggest mistake someone can make. Who knows what the deep web may hold…

Then, one person mentioned his response, something that would popularize the entire thread.

He stated by text, “Some weird anime about naked girls stuck in a large bathroom without doors, having a philosophical debate about never getting out of the room. After losing hope and starving for some days everything goes downhill. They just start screaming and yelling. Then they all commit suicide, either by smashing their heads on the floor or scratching their necks to bloody pieces. One girl helped the other to drown in the sink, because she asked her to hold her, because she couldn’t do it… I cried myself to sleep right after watching that vid, because I just didn’t even know anymore… Why would anyone draw that with such precision? It was goddamn horrifying,” he continued, “Looked 80-ish in quality (audio too). Japanese dub. English subs. Lasted for about 30 minutes. No credits, but it seemed ripped. Voices sounded very young, but eh, Japanese sound young in their 50’s. Haven’t seen or found it again. The name of the vid was something along the lines of ‘Go For a Punch’ or something.”

The response quickly riled up as many people started to ask for sources as they wanted to learn more about what this person was talking about. The person will be referred to as OP, short for original poster. (FYI, everyone would be considered anonymous so it’d be hard to track down the OP, right? Well, 4chan isn’t really as anonymous as it claims to be. With some kind of tracking, the OP could be easily identified. However, this was at first a small group of curious users trying to find something together, and so they would take the OP’s word; they would likely identify him by his way of texting, and the absence of impersonators.)

The OP’s stance was a very questionable source, mentioning such things like, ‘I cried myself to sleep…’ was odd, maybe it was some exaggeration. Though the name, ‘Go For a Punch,’ felt believable as translations were not as accurate back in the olden days.

The OP responded in favor, “Little, rather far apart eyes almost like by Miyazaki. Most had bushy brown hair and only one (the one that was drowned) had really brightly colored hime cut. Ask me more details if you want, I remember everything and not just because I have a partially photographic memory, but because it was really intense for me at the time,” he went on, “Especially because of one particular scream one girl had. It had a really strange echo to it, and almost made me dizzy. The closest reproduction of that sound I can find is from The Shining soundtrack ‘Dies Irae’ I changed the pitch so it’s more like it:” (posts an audio file link), “I swear if I’ll hear the real thing again I’ll go berserk,” the OP attached an image of an already existing character, “Pic related - the girl with the hime cut, but imagine her with almost white hair.”

The search was only getting started, and it seemed like the OP himself really wanted to uncover this lost memory of his; he even had the support of other curious users. But how much could users believe some other random user on the internet? And how much could the OP believe in his own memory of, whoever knows how long ago?

The OP went on, and on, “I hope you have better luck than me. But at the same time I hope you don’t because if you’re anything like me, it will be pretty depressing. It just has this abstract feeling to it, that doesn’t go away for a long time. It definitely wins the time record for character development. I really felt bad for all of them. There was 9 girls in the room. 8 of them looked really similar, but all their voices varied. There was not even instrumental music, just occasional ambience throughout the video… What was most unsettling about the suicide scene were the weird camera angles and no horror music as I’d expect, just girls softly sobbing and gagging as they ripped their necks open with their fingers. They looked like an embodiment of lost hope. And the head smashing parts… I don’t even want to go into details.”

The OP continued to another subject, it was almost unreal, “Title of the video was probably not true to the original, since this is deep web we’re talking about, even less reliable source of information than ****posters on 4Chan. But even if it was deleted, there should still be a way of restoring it, since it was once posted on the internet. That depends on time, though…”

The OP then posted more regarding information and clues about the files, “And also: Sorry if I misled anyone. I’m ****ing stupid, how could I forget. There were probably Japanese symbols in the title, but I had a very old version of my computer's operating system, so I could only see them as little boxes. It was like this ---- Go For a Punch ------------dl/(some code consisting of letters and numbers) I’m not sure if the exact amount of boxes is accurate, but I’m sure there was less boxes before the english text…”

Anonymous replied, “Maybe it was an amateur anime from the 80's. Sometimes i think about music and how there is some really obscure stuff out there (my current obsession Japanese avant-folk music) it makes me wonder if there were obscure anime or **** like that.”

The thread started to spread across the internet. Later that day, someone reposted the thread into the anime section, and a new name emerged.

An anonymous user posted, “I got the name Saki Sanobashi on /a/, ring any bells? Funnily enough, searching that on google gives no results and the mods/janitors just deleted my thread… Is this your anime, anon?”

After that mention of such a weird name, the OP had gone quiet. There was no explanation on why the OP suddenly went ghost. However this mysterious name someone had somehow come up with grew within the community and has been admired as one of the character’s unofficial name of the lost media; despite 'Sanobashi,' not even being a proper Japanese saying; it was more likely a made up name. Nevertheless, people now had a name to attach to a lost character and their goal now was to find her within the lost bytes of the deep web. This journey would have people searching for years, maybe even still to this day…

The blue screen lit up a dark room, the words reflected onto the widened eyes of a man. The words of the post in front of him resonated within his brain. The shocked man in question was the OP, Eichi Mochizuki. Eichi took a double take at his monitor screen, he muttered something slowly to himself. It had seemed like our OP was reminded of something. Eichi instantly got up and turned away from his computer. He was genuinely terrified.

“That name… It was one of the character’s… No. That’s… that’s… a real person,” he said trembling. 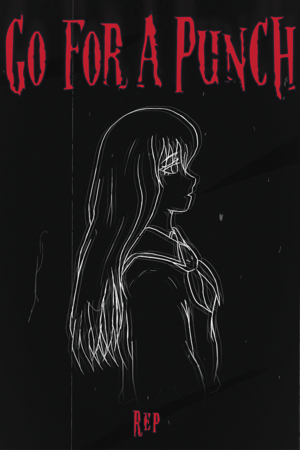 Go For a Punch