Why My Father Left Me on a Rainy Afternoon

Among the Clouds, and the Cat She Found There

Before I talk more about Erica, I need to wind back the clock a little bit.Bookmark here

I was born on a spring afternoon. The rain flooded the hospital garden two stories below our room. My father watched as it happened, too nervous to witness my momentous arrival. He instead used my mother’s screams and the nursing staff’s patient encouragement as an approximation for how close I was to being delivered. When my father first gazed at my cherubic face, he promptly packed his umbrella and took a stroll to the convenience store.Bookmark here

My father at the time was a chain smoker. He picked it up from his father, who allegedly picked it up after he lost our family fortune over a game of mahjong.Bookmark here

Well, he didn’t lose it over just mahjong. He lost our bank accounts after a couple matches of poker and a little too much drinking. He gambled away the retirement savings on horse racing. He handed over what remained of the investments to a grim-faced man with opulent glasses running a multi-billion-dollar Ponzi scheme.Bookmark here

The last piece of our family treasure was a deed to new plots of land being developed down south, and that was the fragment of our wealth that my father’s father bet away on a hopeless night of mahjong.Bookmark here

Of course, my grandfather didn’t begin smoking that very same night. He was, like the rest of the men of the Lee family, particularly stubborn about losing. He instead concocted a brilliant plot to win back the deed.Bookmark here

At the time, the plot sat in the middle of a massive agricultural sector, and legal restrictions by the local court forbid any major developments on the land. The family that now owned the deed thus needed a caretaker to watch over the land while waiting for the courts to lift the development restrictions. So, they hired one. That caretaker turned out to be a maid in the employ of my grandfather, who proceeded to build a quaint hut from where she would live for nineteen years, eleven months, and thirteen days with nobody but a few books and a pleasant dog named Gary.Bookmark here

Yes, I’m afraid the specificity matters, not because I could write a novel of that length, or that it illustrates the grand flow of time, our maid’s unnerving loyalty to a man who ordered her to live on a patch of dirt, the sweeping panoramic historical view of an agrarian Hong Kong giving way to more industrious projects.Bookmark here

No, it’s because it illustrates my grandfather’s inability to count, an inexcusable mistake that I rectified at the age of two. I, myself, learned my times tables from a Singaporean nanny who kept a total of a hundred and seventeen pigeons in her attic.Bookmark here

Anyway, nineteen years, eleven months, and thirteen days. That was the amount of time that the caretaker presided over that plot of land. Had she watched it for exactly twenty years, then she could have declared that the original owners of the land had been negligent of their responsibilities to their property and she, the custodian, but really a maid in the employ of my grandfather, was the true guardian and owner of the plot. That would win us back our deed.Bookmark here

Now, anyone with an eye for foreshadowing can guess at the problem.Bookmark here

That’s right. My grandfather, much like my father, but certainly not me, ejaculated prematurely to our maid, dialogically I mean, screaming over the phone the words, and I quote: “take the land back from those thieving pigs!”Bookmark here

Of course, the family that owned the deed weren’t thieves. Well, maybe they were in the sense that all land ownership is thievery, but my grandfather was still just a degenerate gambler, which meant if he lost, his wins had been taken from him.Bookmark here

When the court declared that my grandfather announced his repossession of the land seventeen days too early, when the police ordered by the judge knocked down his maid’s hut, when he was forced to sell his lovely goat Sally in order to help pay for the court fees, my grandfather took his bamboo umbrella, strolled into the local convenience store, and bought a pack of cigarettes.Bookmark here

Many years later, his son, having just given birth to a baby boy, walked over to a bodega. He too, had a long-chronicled history with cigarettes. My young rambunctious father was forced into military school after one too many fights with the bullies at public school. His parents believed that the academy would set him straight, but in the years that followed, it just set him on a path of flames.Bookmark here

At military school, my father smoked cigarettes, he smoked weed, he smoked mushrooms, he smoked Applewood bacon, he smoked mashed potatoes with hay. He smoked so impressively and so pervasively that to this day it almost surprises me that he didn’t smoke his exams.Bookmark here

But to give my father credit where credit is due, I’d like to believe that all of these memories swirled in my father’s mind as he stood outside of the bodega. It feels poetic that he reflected on two whole generations of smoking because the first thing he did upon walking to the cashier was ask for a pack of nicotine patches.Bookmark here 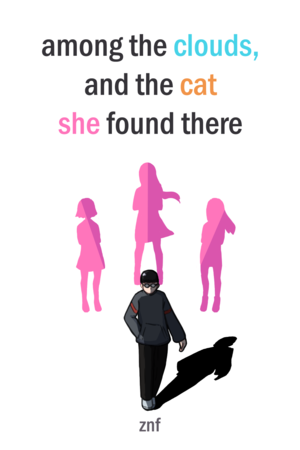 Among the Clouds, and the Cat She Found There