Hey there, Honeyfeeders! I hope you're all staying warm. My area is gearing up for a serious arctic blast with record low temperatures for the next couple days, so I want to upload some chapters before I freeze to death...Bookmark here

These scents met Marilyn as she opened the front door to her house. A homely atmosphere by aromas alone, inviting and tranquil. The interior of the living room was spotless, with a cream-colored carpet and cozy furniture accented with walnut wood.Bookmark here

An L-shaped sofa matched the marble and glass coffee table, and the skinny woman with sharp cheek bones sitting on the couch was a nearly perfect fit for the squared design of a chic room loaded with 90-degree angle arrangements.Bookmark here

The skinny, sharp-featured woman on the couch gazed over her wine glass filled with Chenin Blanc, looking at Marilyn with a chastising smile; the white wine’s flavors of ripe apple, lemon drop, pear, and honeydew gratuitously complimented the apple pie and butter pecan air, as well as paired with Marilyn’s cinnamon aura.Bookmark here

“Hello, Marilyn.” Ophelia did not offer a warm reception, her smile all but welcoming.Bookmark here

“I made apple pie,” the stepmother said, aerating her wine, keeping her condescending eyes on the stepdaughter, “and homemade butter pecan ice cream. You may help yourself to some.”Bookmark here

It was the same recipe Ophelia had sold to a two-star Michelin-rated chef for a lofty profit. Marilyn had never eaten a better baked dessert, and her oatmeal raisin cookies were slop in comparison.Bookmark here

The watchful, serrated look from Ophelia made Marilyn realize she had no choice but to head directly into the kitchen and promptly prepare herself a helping of the award-winning dessert. Without a word, Marilyn hoisted her backpack from one shoulder to both shoulders to secure it on her back, the keychain figurine of Cold Fjord’s mascot swinging from one of the zippers, and she walked into the kitchen.Bookmark here

On the pastel color-tiled countertop, the apple pie was resting in the glassware pan, uncut and waiting for the first slice. Marilyn stared at it for a few seconds, feeling the eyes of her stepmother in the entryway behind her.Bookmark here

She removed the pie knife from the knife block next to the stove, holding the angular stainless steel blade with a hesitant hand as she approached the untouched, exquisite dessert.Bookmark here

“You get the first slice,” Ophelia said.Bookmark here

Marilyn didn’t need to see the smirk on her stepmother’s face to know it was there.Bookmark here

There was no turning down a generous opportunity to practice the finesse of digging a blade into an award-winning creation. This was a chance Ophelia had planned to bestow upon Marilyn on this day, after all.Bookmark here

Marilyn hovered the blade over the pie.Bookmark here

“Don’t be sorry. Be better.”Bookmark here

The top crust of the apple pie was of uncommon flakiness, and the gooey fruit filling was deceptively adhesive to the surface of the angular pie knife. Marilyn’s sweaty palm offered no assistance as she pierced the flaky skin atop the pastry, plunged into the visceral filling as steam bled from the opening, and as the knife hit the glass bone beneath the bottom layer of the pie’s confectionary cocoon.Bookmark here

She dragged the blade from the hot center toward the rigid outer wall of enclosed crust, feeling every millimeter of surgical slicing. The specimen’s gush of apple-scented breath swirled with her cinnamon aura and Ophelia’s floral white wine.Bookmark here

In a heartbeat, as Marilyn completed the first radial incision, Ophelia was over her shoulder, being much taller than Marilyn to easily observe the operation.Bookmark here

“Congratulations,” Ophelia spoke into Marilyn’s left ear with a mocking tone, “you’ve killed my masterpiece with your infantile knife work.” The smell of alcohol and sweet wine plummeted into Marilyn’s sinuses. “All that’s left is a dishonored corpse for you to work with, so be as sloppy as your whimsy allows.”Bookmark here

After failing to perform a straight, clean cut, Marilyn felt no need to stress precision with the second cut. Ophelia watched with a wry smile as she sipped her wine, amused by the crude and unrefined way Marilyn lifted the slice of pie from the glass dish and piled it messily onto an old ceramic plate.Bookmark here

“You seem to care so much about your own artwork,” Ophelia told Marilyn, “but your inhibitions show no mercy after ruining other peoples’ creations.” She gestured toward the mangled glob of pie on Marilyn’s plate with her wine glass. “A slice of this pie that size is worth over thirty-five dollars retail price at today’s inflated food costs. This is what thirty-five dollars looks like to you.”Bookmark here

Marilyn said nothing, staring at the linoleum kitchen floor, making sure both Ophelia and the dead pie were out of her sight, although the aromas from both abominations still invaded her senses.Bookmark here

“Maybe you could take a picture of it,” Ophelia added with a sneer, finishing off her wine. “What was it you said about your photos? What was the centrifuge of your artistic reasoning?”Bookmark here

Swallowing the despair in her throat, Marilyn uttered, “To capture the abstract with photography…and reality with painting.”Bookmark here

Ophelia snickered. “Right, right. Take a picture of it and call it ‘Thirty-Five Dollars of Abstract Deliberation.’ That’ll be marvelous.”Bookmark here

“You don’t know anything about my artistic tendencies.”Bookmark here

There was obvious rebellion in that statement, which made Ophelia cringe with anger. She glared at the teenage girl who didn’t dare to look her way.Bookmark here

Marilyn’s chest swelled with anxiety. She took a deep breath, but still couldn’t look at Ophelia. Award-winning pie filling dripped from the angular knife in her hand, falling to the linoleum floor.Bookmark here

“I vow to follow my heart, despite the hardships,” Marilyn answered, applying rigorous effort to prevent her voice from quivering.Bookmark here

“Following your heart, hmm. You do so, even though you know it’s probably detrimental to your wellbeing?”Bookmark here

Marilyn didn’t know what to say. She couldn’t determine whether Ophelia had a point or was purposely being difficult, if not both.Bookmark here

“Here’s some advice from a parent,” Ophelia replied basely with a sneer as she looked into Marilyn’s hazel eyes. “There’s a fine line. On one side, you’ll be sticking to your guns, powering through hell or high water for the sake of being loyal to what you believe in…your heart. On the other side, you’ll be tearing yourself apart, ruining your life and wasting your time and resources on something you’d be better off forgetting about, all while the whole world passes you by. It annoys me to no end how you plan to go ahead without being aware of this fine line right now. But mark my words, Marilyn…there will be a day when that line will split you in half.” She drove a spikey finger into Marilyn’s breastbone. “When that happens, and when you don’t know which half of you is more important, that will be the day you taste a type of death that doesn’t end your life…but makes you stare your life in the face and ask it questions you didn’t know you needed answered.”Bookmark here

Ophelia placed her empty wine glass on the tiled counter by the sink before heading out of the kitchen. In the entryway, she stopped and turned back to Marilyn, who was looking at the floor again.Bookmark here

“There’s ice cream in the freezer,” Ophelia told her. “You’ll put one scoop on that ‘slice’ of pie. And remember,” her pointed lips curled into a sharp grin, “it’s worth twelve dollars a scoop these days.”Bookmark here

Alone in the kitchen, Marilyn dragged her feet over to the freezer. Retrieving the homemade butter pecan ice cream earned her stinging cold air against the two thin streams of tears on her face. With a scoop of ice cream on her murdered slice of pie, she stood in place as she ate the dessert in the middle of the refurbished kitchen.Bookmark here

It looked hideous, but it was the best-tasting baked dessert she had ever eaten, more so than the oatmeal raisin cookies her mother had taught her to make.Bookmark here

The soft melodies of the album Ultralife by London-based alt-pop duo Oh Wonder played quietly from the mahogany Victrola vinyl record player in Marilyn’s bedroom. A cinnamon-scented candle, mostly melted, was on top of the white dresser with pink trims; the candle was not burning.Bookmark here

Sinking into her large beanbag with colorful polka dots, Marilyn stared at her smartphone. She wiped her eyes on her arm and wrist as she typed a message to Katie, saying:Bookmark here

["Do u think following ur heart is a bad thing?"]Bookmark here

Not taking her eyes from the text message app, she saw the three-dot ellipsis indicator on the bottom of the screen in a speech bubble, showing that Katie was currently typing a response. After several seconds, Marilyn received Katie’s message.Bookmark here

["Of course not! Why r u asking?"]Bookmark here

Marilyn was relieved by her best friend’s confirmation. However, Ophelia’s words still burned icy cold in her chest, and she typed another message.Bookmark here

["Im afraid it’s a waste of time. Like there’s too much important stuff in life Im gonna miss if I follow stupid things. They say that he who trusts in his own heart is a fool, but he who walks wisely will be delivered"]Bookmark here

She tipped her head back and stared at the ceiling, her beanbag gently rolling within itself as she stretched out her legs. For the first time, she realized just how relaxing the Oh Wonder album was, and how much warmer it sounded on vinyl than streamed off Spotify. Rain drops tapped at her window.Bookmark here

A small sound let Marilyn know of a received text message, and it was rather short despite the length of time to compose it.Bookmark here

As Marilyn thought of her response, she inhaled through her nose, a single, long, deep-lung sniffle. Breathing out through her mouth, she somehow smiled, automatically, without effort, and sent another text message to Katie, which said:Bookmark here

["Im just a little wiser. But maybe just as stupid"] 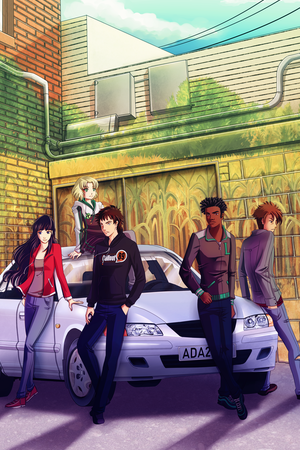