In Sara McKinsley’s defense it wasn’t her parents fault that they were bad at parenting.

They were super busy, ultra-important people with important things to do. There is a key difference between the skill sets required to be parents and scientists. One of them could stop a space shuttle from malfunctioning mid orbit. The other stopped a three year old from having a nervous breakdown at daycare. She accepted that her parents were significantly better at the former than the latter at a young age. It made growing up significantly easier.

Okay, not that much easier.

Her Dad once made a zero-gravity chamber for her science class in elementary school. Mom once made a fertilizer that was so effective for her class garden they patented it. Her absolute favourite though was having to spend time at her grandparent’s house because her parents made a crater on the moon. A visible carter from earth, mind you. Grandma made way too much katsudon that October.

All of this is to say that Sara McKinsley is used to her life being abnormal under the best circumstances. This, however, was a big change even for her.

“Miss,” called the middle aged man in the front of the boat, “Miss!”

The teenaged Sara squeaked as she looked up from her phone, fumbling to slip it into the pocket of her dress.

“We’re approaching Academy Island! You can see Tashak Mountain in the distance! Ain’t she a beauty?!”

In the looming distance, the shadowy tip of a mountain peaked out from wispy clouds. As the boat drew them closer and closer to shore, its magnificent size became more apparent. Though it was proud, it did not stand alone. It was nestled in a range of smaller mountains that created a beautiful embrace for the flat land and town that was beneath it. White concrete buildings contrasted greatly against the deep greens of the tropical forests.

This was it. This is where she’d be spending the next three years of her life.

At a boarding school in the middle of the pacific.

That she had only heard of two days before being shipped off by her parents who were too busy terraforming Mars to tell her. Yeah, Sara McKinsley is pretty sure that qualifies as bad parenting.

Sara took a deep breath and fished out her phone, having felt it vibrate in her pocket.

How curious, she had a new email.

By the time this email reaches you, I believe you’ll be on the verge of a new beginning. You’re going to be beginning a new life. A new school year. You’re going to meet all sorts of new people. I debated whether or not I should send this to you now or later, but I think it’s best if I start now. If we both start this new chapter of our lives together.

So as you take your first step onto that sandy beach, know that I am taking a first step of my own. I will be rooting for you this entire journey and throughout your school life. And though you may not understand now - you will one day know that everything I say, I say for you.

P.S - Don’t wear that light green sundress to orientation in the dorms. You’ll thank me later. 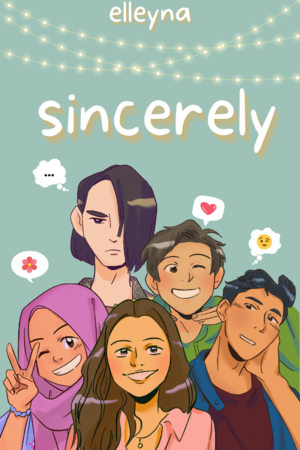